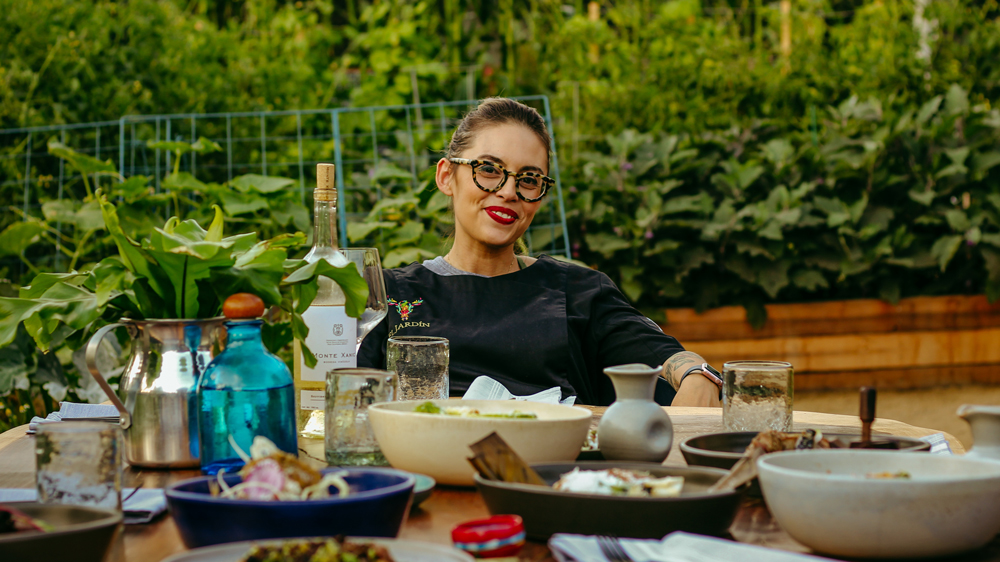 The challenges of opening a restaurant are myriad. Real estate, construction, government bureaucrats, staffing, menu creation—the list goes on and on. But Claudette Zepeda-Wilkins had an uncommon challenge when she prepared to launch El Jardin in San Diego. She was a reality TV villain.

On the most recent season of Top Chef, Zepeda-Wilkins wore the black hat. With her blunt assessments of others combined with her confident and unapologetic manner, she seemed to rub other contestants the wrong way. Though it’s pretty anecdotal, when I asked a couple I know living in San Diego if they’d visit El Jardin, they cited Zepeda-Wilkins’ Top Chef performance as a reason they may stay away. Appearing on a reality TV cooking competition had raised her profile. Just not in the way she was expecting. A person making their living in the hospitality business had been portrayed on national TV as inhospitable.

But this wasn’t Zepeda-Wilkins’ first crack at Top Chef. She previously appeared on the Mexican edition of the show and was deemed the sweetheart. So she understands better than most what the media giveth, the media taketh away. As a new crop of young cooks across the country ready themselves for competition in the Emmy-award-winning Top Chef, we wanted to hear from Zepeda-Wilkins about her experience last season and how it actually helped her grow as a chef.

Do you think Top Chef hurt or helped El Jardin as you opened?
It’s a little of a double-edged sword. People that didn’t like me will come in because they want to see a hot mess in the kitchen. It’s funny, I’ve actually read some of the Yelp reviews where it’s like, “If you come in looking to see Claudette be a hot mess, don’t, you should leave. She had it under control.”

And there are some people that loved me on the show. It’s usually Latinas and young women who felt part of what I did resonated with their story. So they come in and I love that. I’ve had people come from LA to San Diego. Older American families. They’re like, “My daughter’s a huge fan of yours and we wanted to come and we heard you’re opening and so we’re here.” And that’s really cool to hear. It hasn’t been anything but good in person, because I don’t think people that write anything negative or comment would never come in and say it to my face. They’re the people that hide behind their computers. But in person it’s been nothing but positive.

How did you think about how you were presented on the show?
You know, it’s reality TV. I knew what I got into. Everyone needs a villain. My husband explained it perfectly. He says it’s like WWE. You’re the heel. The Rock was the heel and look at him now. Hindsight’s 20/20 and honestly regardless if I’m the sweetheart, like I was in Mexico or the villain as I was portrayed in America, I’m in people’s thoughts in one way or another. It has been kind of cool to then prove to them that I’m not just that 30 second clip. I think that is coming through slowly, but surely.

Could you sense how you’d be perceived while it was happening?
Not while it was happening, no. Oh my god, no. You don’t feel it at all. They make you feel like you’re super comfortable, which is why you’re able to just kind of let your guard down and sit there and be like, “Yeah.” I had one producer the whole season, so I was super comfortable with her and that’s where you let your guard down and your filter is non-existent.

Would you appear on Top Chef again?
Absolutely. It taught me way more than I would’ve learned by myself and growth that happens during that period where you’re dataless, family-less, and you go to those ugly parts of your psyche and it makes you a better person. It can’t not make you a better person.

In what ways did it make you a better person?
It makes you more patient. It makes you more aware that just everything can be taken away from you in a split second like when you’re working, you know? So your adaptiveness and your ability to roll with the punches, most people in my profession are very type-A when it comes to that discipline of putting everything in order. Top Chef throws that right out the door. You never know what you have. You can’t be prepared and you prepare for having nothing. And that makes you a more adaptable chef and a freer chef.

You’re better at improvising.
Now when I hear from my cooks, “Oh, but chef, we don’t have this!” I’m like, “But you have this.” I was able to teach them that improvisation that I didn’t have before Top Chef, because I was also very boxed-in to say, “I have to have this. This is classic and don’t mess with it.” But nothing is set in stone until you present it to the customer.

Being in Colorado probably didn’t help you have all the ingredients you wanted anyway.
That was hardest part of my season was where I was geographically. I had just come back from Mexico and was so inspired by my culture and the ingredients and I get thrown into a Whole Foods where I had nothing. The tomatillos were half-rotten most days. So that adaptability of being able portray my flavors without my ingredients that was the coolest thing. The first two episodes, clearly I didn’t feel comfortable in Colorado. And then when I did Last Chance Kitchen [the mini-competition where eliminated chefs can win their way back on the show, which Zepeda-Wilkins won] I broke myself of the thought that I had to only make Mexican food with Mexican ingredients.

How did you do that?
I made tons of lists of everything in the pantry before I went into Last Chance Kitchen. I tried to find the closest flavor connections. That exercise was huge for me to be able to still convey my flavors with non-traditional ingredients and give the judges Mexico. That was the best part of that entire season—Last Chance Kitchen. Being able to cook for [the famed chef and judge] Tom Colicchio, and only Tom, with my flavors, that was the biggest growth for me.

In that exploration of ingredients, what did you find was foundational, and what could be substituted?
Chiles and tomato. those are some of the indigenous ingredients that are from us, from our roots. Alliums aren’t from Mexican indigenous cultures. It comes from the European cultures, you know? It was a pretty cool exercise to take everything away that’s not Mexican, or that’s not natural to the Americas and then try to cook and then vice versa.