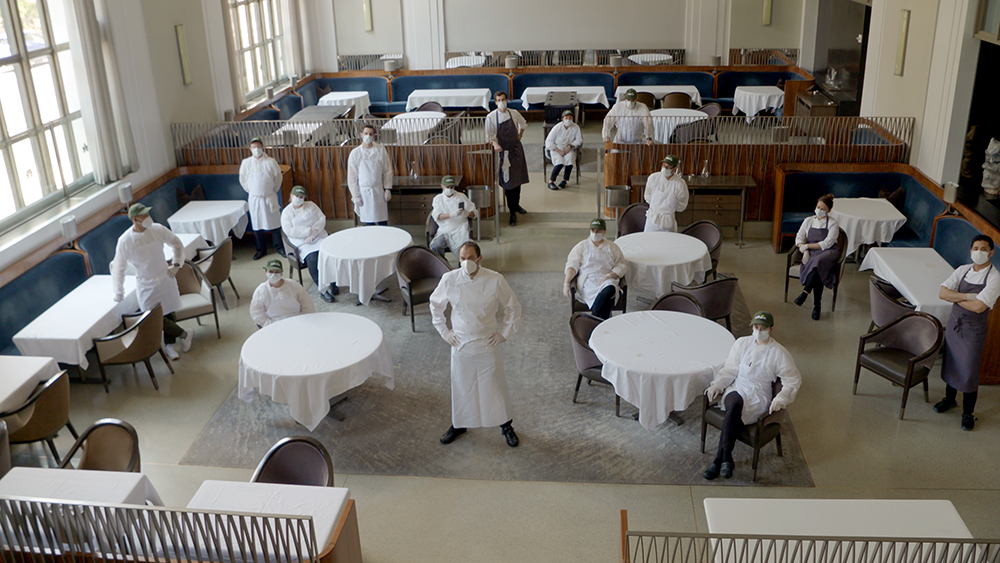 Although his very industry is being ravaged by Covid-19, Daniel Humm has not given up. After fundraising $50,000 for restaurant staff affected by the pandemic, the Michelin-starred chef has started churning out thousands of meals a day to feed New Yorkers in need.

Humm, who helms hospitality group Make It Nice, has turned the crown jewel of his empire, New York’s Eleven Madison Park, into a “commissary kitchen.”

“The most important thing any of us can do is find ways to support the healthcare workers on the frontlines of this battle and those struggling to survive it,” the chef said in a statement.

Eleven Madison Park—which was named the World’s Best Restaurant in 2017 and boasts three Michelin stars—had been closed since dining in at restaurants and bars was banned by the city in mid-March. Now, it’s making more than 2,000 meals a day for hospital staff and underprivileged New Yorkers.

The chef is not alone in his efforts. Humm has partnered with NYC-based nonprofit Rethink Food and American Express to achieve the mammoth undertaking. Former Eleven Madison Park employees will work in teams of three across the restaurant’s different kitchens so that multiple groups can work simultaneously. Rethink will then deliver the meals to hospitals and community centers across the five boroughs.

“We’re grateful that this partnership will allow the Eleven Madison Park team to contribute in such a significant way,” the chef said.

Recent statistics released by public health officials in New York City suggest that the deadly virus is hitting low-income neighborhoods the hardest. On top of that, soup kitchens and food banks across the city have closed due to health concerns over the spread of Covid-19. To combat the food shortage, restaurants and organizations like Rethink have ramped up efforts to serve more people in need. In addition to Eleven Madison Park’s initiative, Rethink has launched a restaurant response program that gives up to 30 restaurants as much as $40,000 to reopen as food distribution centers.

“This is obviously an extraordinarily difficult moment for New York, and this program has given our team the chance to not only help people, but to do what they love: cook,” Humm said. Here’s to that.

While most of us may not have restaurant-worthy cooking chops to offer, there still plenty of ways to help. Here are 15 ways you can donate to the coronavirus relief efforts right now.