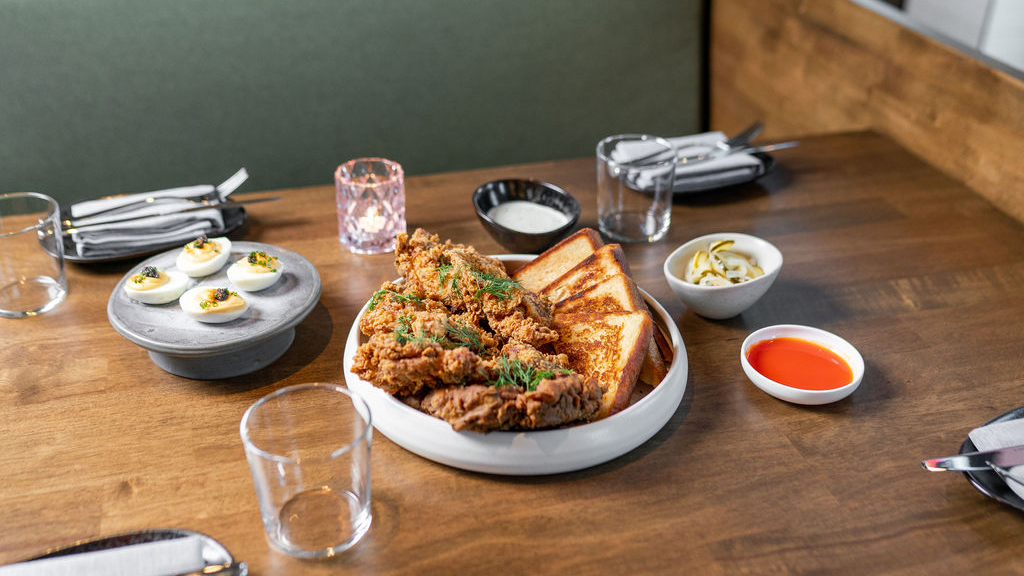 There is something twisted about restaurants that still encourage tables to share tapas-sized plates. They aren’t actually fostering sharing, they’re fostering conflict; how can anyone enjoy a dish when they have to ration bites of a shrimp or licks of an olive with everyone else at the table?

At Emilie’s, a new American restaurant that opens tonight on Capitol Hill, you don’t have to share your food, you actually want to share your food. Many plates are family-sized platters that deliberately require you to reach across and pass things to your neighbors. It’s interactive, it’s intimate. And it all starts with a fresh-baked loaf of sourdough.

“No pun intended, but it’s definitely intended: You’re literally breaking bread when you get there,” Chef Kevin Tien said. “I like to think of it as a true sharing experience. It’s all about creating a sense of community around the table.”

The 5,100-square-foot restaurant is the 32-year-old chef’s sophomore effort, and he’s apparently bringing the entire community with him. Emilie’s is fully booked out for the next month. (The restaurant has an open kitchen layout and seats 110 in the dining areas and 48 in the lounge areas; an 80-seat patio will open at a later date.)

“Everyone keeps coming by to say hello or drop off food because they know we’re not eating because we’re working so much,” he said. “Not just other chefs, but we have neighbors stopping by, saying, ‘we don’t know what we can do, but we’ll be here.’ It’s really nice to see all the support and the love.”

Tien stans know him as the founding chef of Himitsu, a tiny restaurant in Washington, D.C.’s Petworth neighborhood that garnered national acclaim for its Southeast Asian-meets-American South-meets-Latin American cuisine. It earned Tien a finalist spot for the James Beard Foundation’s Rising Star Chef award. But last month he severed ties with Himitsu, completely turning it over to partner Carlie Steiner. (That restaurant has since been renovated and rebranded as Pom Pom.)

“[Emilie’s] is about five times the size [of Himitsu],” he said. “There are a lot more programs that we have here that we didn’t have at Himitsu just due to the space constraints. So with so much going on, I wanted to be able to have the time to focus on everything over here. Otherwise I just think we’d end up doing kind of a half-ass job.”

Emilie’s will have the same sensibilities that Himitsu had on Tien’s way out the door. The cuisine is globally inspired and eclectic, but defined by what he dubs “New American,” which includes all the ethnicities and backgrounds of people who define themselves as American in the U.S. today. He’s surrounded himself with a diverse crew with a wide range of specialties—bread-making, butchering, fermenting—to pull it all off.

“If I had a team that ended up executing everything I did to a ‘t,’ this restaurant could only be so good,” he said. “We wanted to be well representative of everybody.”

The communal menu is reflective of his and his staff’s backgrounds. Tien himself is of Vietnamese heritage and grew up in Louisiana. He’s serving mounds of fried chicken alongside Texas toast, a 32-ounce pork blade steak, beef tartare laced with crab fat mustard and ricotta cavatelli spiced with paprika, among other dishes.

The restaurant will also feature mobile food carts for what Tien calls “Choose Your Own Adventure-style dining.” The bread comes out on a breakfast-in-bed-style tray, with a variety of spreads to choose from including pâté and eggplant dip. Another wandering cart is filled with pickles and fermented foods, which diners can use to add some acid to richer dishes. And the restaurant will soon incorporate an oyster cart, where they will shuck bivalves tableside.

And at the end of the meal, a dessert cart circulates with ready-to-grab sweets. Those include coconut and pandan pudding with tapioca and roasted bananas; honeycomb candy-flavored milk with salted rye cookies; and five-spice cake with roasted squash. Other dessert plates are more composed and made fresh-to-order in the kitchen, like a molten cake that’s filled with Gjetost, a Scandinavian cheese.

Tien—who has worked under Aaron Silverman at Pineapple and Pearls, David Chang at Momofuku CCDC, Tyson Cole at Uchi and José Andrés at Oyamel—wants his restaurant to also be dedicated to philanthropic causes. He has plans for a series of visiting chefs dinners, the proceeds of which will be donated to charity. Emilie’s will also donate all of its reservation cancellation fees to a rotating list of charities.

“I heard this from someone else, but when chefs cook, what’s on the plate is important,” he said. “It has to be tasty and beautiful. But everything that we do at the restaurant, off the plate, should mean even more. This sounds cheesy as hell, but we’re not cooking just to cook. A lot of people love chefs and listen to chefs, and as a chef, we have a platform where people will listen. So why not use that to make a difference?”