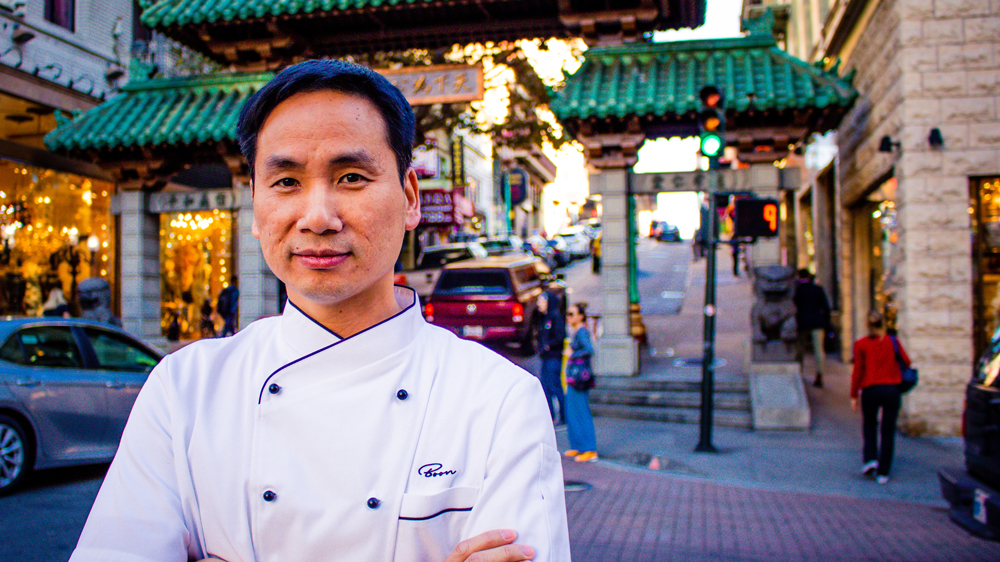 Before it became known as a nightlife brand associated with globetrotting DJs and elaborate bottle-service presentations, Hakkasan was a global pioneer of contemporary Asian food. Ho Chee Boon, who was Hakkasan’s international executive chef, opened restaurants for the high-end hospitality group in London, Moscow, Bangkok, New York, San Francisco and beyond. Under Ho’s leadership, Hakkasan restaurants earned Michelin stars in both London and New York.

Now in 2021, a year that’s seen hospitality behemoth Tao Group acquire Hakkasan (which closed its New York and San Francisco restaurants in 2020), the Malaysian-born Ho is writing his own path at a new buzzworthy restaurant in San Francisco. On June 18, Ho will open Empress by Boon with modern Cantonese food at the former location of Chinatown’s iconic Empress of China restaurant.

“I was fortunate to visit San Francisco for the first time 10 years ago as we were preparing to open Hakkasan and I immediately fell in love with the city,” Ho says. “I had visited other parts of the United States, but they didn’t compare with the people I met here. It created a dream for me to someday have a restaurant in San Francisco.”

The restaurant takes over the space formerly occupied by the beloved Empress of China.  Photo: courtesy Jean Bai

For its first month, Empress by Boon will serve a family-style prix fixe menu that includes steamed shrimp with kaluga caviar and grilled ribeye with tofu and mala sauce. There will also be Ho’s renditions of salt-baked chicken and hand-pulled noodles with enoki and shiitake mushrooms. And Ho plans to add an à la carte menu with dishes that change frequently.

The chef describes his food as “modern Cantonese,” but Empress by Boon is also very much a California restaurant. It even has its own Northern California farm, where Ho and his team are growing bell peppers, cauliflowers, onions and more.

“I’m serving modern Cantonese cuisine utilizing ingredients different from typical Chinese food,” he says. “The menu will be seasonal and will incorporate fresh ingredients from local purveyors and organic produce grown on our farm in Gilroy. With the farm to support our restaurant, this really will allow me to constantly change our menu to ensure our guests never get bored and are always offered a seasonal menu.”

Beyond California, Ho will serve duck that’s exclusive to Empress by Boon. He’s been working with renowned Pennsylvania duck farmer Joe Jurgielewicz on a bird that’s raised humanely and fed an organic diet.

Ho at the restaurant’s farm in Northern California.  Photo: courtesy Empress by Boon

Ho knows the stakes are high at Empress by Boon, which has taken over the location of what was a beloved restaurant, banquet hall and wedding venue where guests enjoyed family-style feasts and celebrated special occasions for nearly 50 years. U.K.-based design studio Atelier LLYS has updated the space and restored details from Empress of China, including carved panels and the original wooden pergola. And the restaurant’s perch, atop a Grant Avenue building in the heart of Chinatown, means there are stunning views from downtown to the Bay.

“We are thrilled to bring the restaurant back to its former glory and pay homage to the special place it held in the hearts of the community,” Ho says. “Our team was honored to take on the responsibility of restoring not only important original interior-design details, but also the vital role the restaurant played in the community as a place to celebrate and gather with loved ones.”

Empress of China delighted a diverse group of guests with its high-end Chinese cuisine. It was opened in 1966 by Kee Joon Lee, an immigrant from Canton, China, who envisioned a rooftop restaurant that would expand the range and amp up the sophistication of Chinese food in San Francisco. He wanted to make eating Chinese food feel like a grand occasion.

“He wanted to serve people not only of Chinese descent, he wanted to introduce the Chinese cuisine to everyone—Westerners, Easterners, foreigners—in an exquisite, elegant manner,” Lee’s daughter, Barbara Yee, told the San Francisco Examiner in 2014, the year the restaurant closed. “When it started, people couldn’t even go up there to eat unless you wore a tie. If you didn’t have a tie, they had a tie ready for you.”

Tables will have sweeping views of the city.  Photo: courtesy Jean Bai

It’s now 2021 and the San Francisco Bay Area is a place where many Silicon Valley titans and tech bros might not wear a tie even once this year, but Ho certainly feels Empress of China’s legacy.

“Fifty years ago, Empress of China introduced guests to upscale Asian dining, and now Empress by Boon will offer diners a more modern take on Cantonese fare in a beautiful atmosphere with views of the city,” says Ho, whose opening menu will also include clove-smoked ribs with plum and lemon; crispy quail with chilies, garlic and 20-year-old Huadiao wine; and baked cod with kumquat sauce. “We’re expecting to attract locals and visitors alike. We want to ultimately serve as a culinary destination.”