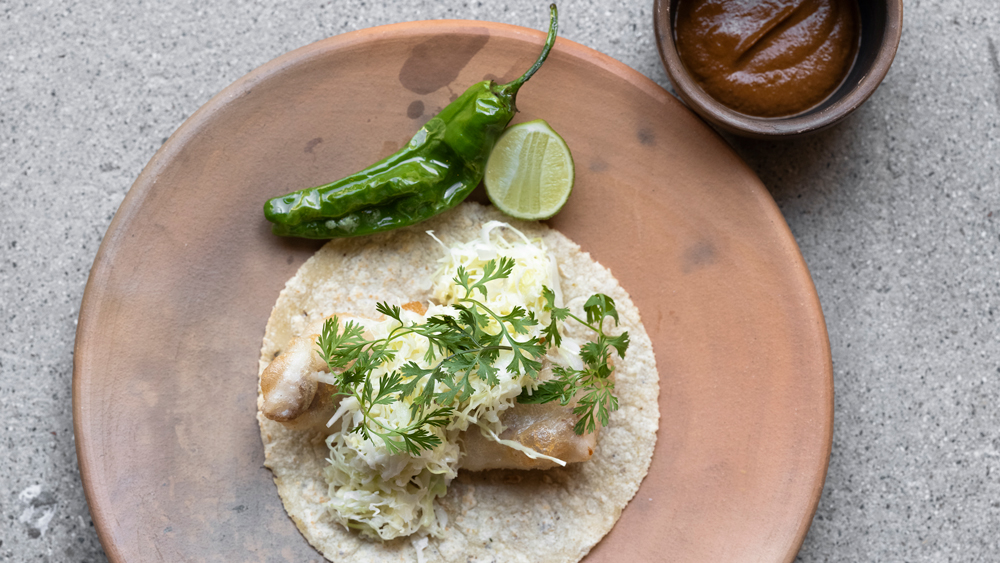 Damian, which Enrique Olvera is opening for patio dining in Los Angeles, is billed as the “twin brother” of Cosme in New York City. (The restaurants were named after brothers who were third-century saints.) Think of Damian, which serves a lot of Pacific Coast seafood and is located across from hit Italian restaurant Bestia in Downtown LA’s Arts District, as the surfer-chic, Baja-loving, fish taco-devouring sibling.

While Damian shares some modern Mexican DNA with Cosme, Olvera and Damian head chef Jesús “Chuy” Cervantes (who cooked at Cosme) have created a menu exclusively for Los Angeles that includes rockfish ceviche, uni tostadas and smoked clams. With the exception of an iconic meringue dessert that was born at Cosme, all the dishes at Damian are new. And even that meringue—currently made with pomegranate—will change its flavor in line with the Southern California’s seasonal fruit, as a nod to Damian’s location.

Despite the stature of Cosme (whose No. 23 ranking on the 2019 World’s 50 Best Restaurants list was the highest of any restaurant in the United States), Damian wants to keep things fairly chill. Olvera understands the old refrain, that people in LA are “more laid-back.” He wants to serve premium ingredients without overcomplicating things. At Damian, a spiny lobster comes with tortillas, so you can make your own tacos.

“Elevated cuisine to me is more and more about the precision of the execution and the quality of the ingredients instead of the creativity,” says Olvera, whose avant-garde cooking at Mexico City’s Pujol made him world-famous. “I’m more concerned about how we execute the food and not so much concerned about creating a dish that’s never been eaten before. Obviously, we like to be playful, and we like to make the food ours. It’s still a big element of our work, but it’s not the center of it anymore.”

All that said, Olvera’s food tells a story that is always evolving. Instead of Cosme’s beloved duck carnitas, Damian is serving a big hunk of albacore carnitas that’s prepared with orange, pork fat, a little Coca-Cola and some evaporated milk. The albacore is slow-cooked, using a method similar to how cod is poached in Portugal.

This being Los Angeles, Olvera sees opportunities to put different Asian and Mediterranean influences into the food at Damian. Rockfish ceviche comes with an olive kosho and white soy sauce. One future dish that’s being developed is carne asada with a tabbouleh consisting of different grains and Rancho Gordo beans. The plan is to serve that with a chile relleno.

“Right now with the menu, we want to make sure people feel comfortable and don’t think it’s too crazy,” Olvera said. “We’re starting very subtly and very clean. Then as time progresses, we’ll be able to be more playful. The start of the conversation should be about having the basics really strong. We’re focusing a lot on our tortilla program and our salsas.”

Damian is getting heirloom Mexican corn from renowned supplier Masienda (which also works with Cosme). The corn is nixtamalized at Damian, and the restaurant has a station for making tortillas. Salsas include a salsa macha with chicatanas, which are flying ants that are a delicacy in Mexico. The salsa macha adds spiciness, nuttiness, smokiness and earthiness to a tamal with strikingly sweet fresh California corn.

Damian’s cocktail list has a heavy focus on agave, with small-batch tequila and mezcal. There’s also Mexican wine, including a house label from Vena Cava in Valle de Guadalupe.

Damian is the first Los Angeles restaurant from Casamata Group, the hospitality company led by Olvera, chef Daniela Soto-Innes (who’s still holding things down at Cosme), partner Santiago Perez and architect Alonso de Garay. Olvera looks forward to having a 120-seat LA restaurant, which will happen when Damian opens its dining room. He’s also moving ahead with Ditroit, a back-alley taco window that’s adjacent to Damian. He hopes to open Ditroit by the end of the year or early next year.

“I think we’re meant to be doing thousands of tortillas a day,” Olvera said.

The plan is for Ditroit to serve one or two vegetable tacos each day, along with a meat or seafood taco that will frequently change.

In the meantime, Olvera and his LA team will be busy at Damian. They wanted to start things slow with two seatings per night. But after seeing how the first month of reservations was booked in a couple hours, they’re thinking about adding a third seating that might be at 10 or 10:30 p.m. This party is just getting started.