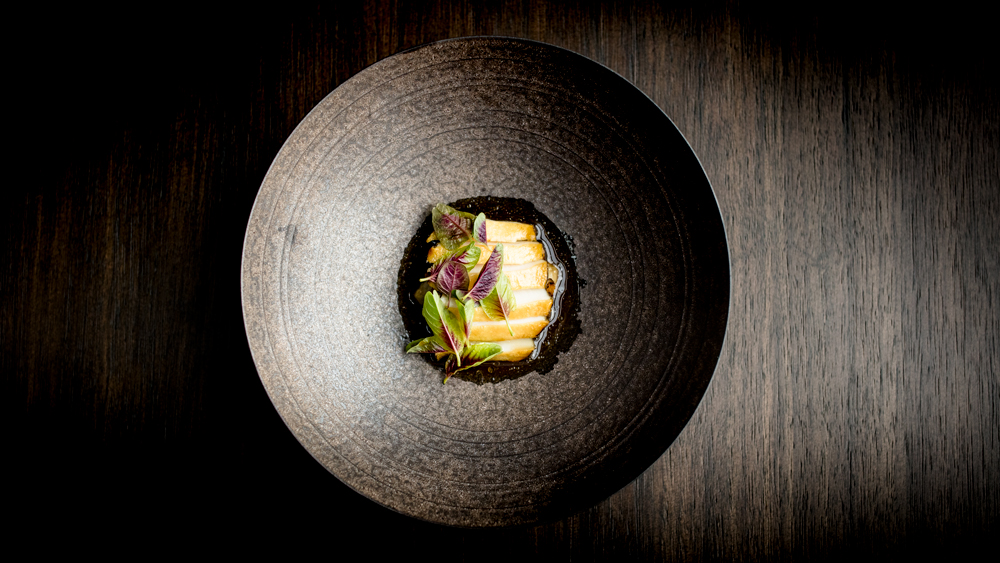 When California chefs head east, they usually try opening projects in Las Vegas or even New York. But Christopher Kostow, who has earned three Michelin stars for the past nine years for his Napa Valley restaurant, The Restaurant at Meadowood, went much farther east: China.

On Tuesday Kostow opened Ensue in Shenzhen, China, a $7 million gamble to transform the megalopolis into a worldwide culinary destination. How invested is Kostow in the project?

“I’d like it to be the best restaurant in China,” he says.

Ensue was funded by 26-year-old Ricky Li, a world traveler whose family owns the financial services and investment firm Dingyi Group. A frequent diner at Michelin-starred restaurants, Li was hungry to bring upscale dining back to Shenzhen. He approached Kostow a year ago, and while the California chef had turned down offers like this in the past, he couldn’t pass on the rare opportunity to cook Western-style food in mainland China.

“This market is interesting because it is a city of 13 to 15 million people,” Kostow said of Shenzhen, which is located near cosmopolitan Hong Kong. “There’s a lot of tech, there’s a lot of affluence and yet there’s really not much in the way of high end, Western cuisine.”

“They’re more similar in point of view than I realized,” he told the Wall Street Journal. “Ingredients and simplicity are drivers of both cuisines.”

To understand regional ingredients and the local palate, he’s taken lots of feedback from Li and recruited Agnes Chee, a food critic and cookbook author. Kostow has even taken the advice of feng shui and Chinese numerological masters. His sous chef, Sean Yue, is a native of Shenzhen.

“There is the perception of Western food as being very French,” he says. “But we’re doing things like water turtle soup that in our minds are pretty respectful of local traditions and yet are very much in our style. I don’t know yet if the diners there understand that degree of nuance; they just don’t have the frame of reference yet. That’s something we also need to be mindful of—how they perceive what Western food is, what their expectations are.”

The subtle, California-style of cooking that Kostow is known for has been difficult to translate. Chinese diners expect their fine dining experiences to be an experience—“they want a sparkler in there somewhere”—so Ensue is attempting to find the sweet spot between being nuanced and being showy.

The chef has also learned Chinese fine-diners prefer their ingredients treated more delicately in preparations such as steaming, and embrace aromatics such as ginger, citrus and flowers and they care about traits such as viscosity and gelatinousness.

“People are very forthcoming with feedback; it’s a bit of a cultural thing. You’re like, ‘hey, how are you?’ and they’re like, ‘nice to meet you, we didn’t like your chicken,’” he says, laughing. “There’s no reputational equity. You have to build goodwill. And it’s also this idea, which also you see in the U.S., that if [the dish] isn’t what you expected it to be, then it’s wrong. Every restaurant opening involves a recalibration of guest expectations.”

The key is telling the story before the dish arrives: This is why it’s special, this is why it’s noteworthy. He has sourced local ingredients such as abalone from Dalian, red seabream from the South China Sea, pork from Jiangxi, mushrooms from Yunnan, river eel from Guangdong and Chinese olives, amaranth and water chestnuts from Dongmen Market. He smokes the eel over green tea leaves, poaches the scallops in dried roe broth and makes lap cheong sausage en croute with the pork.

The only thing Kostow’s importing right now is beef and black truffles, although he soon hopes to add Napa wines to the menu. But he will be exporting a few things; he says the way he cooks in China will influence how he cooks at The Restaurant at Meadowood.

“There’s a preciousness to things in China, in Asia in general, that we don’t cook with,” he says. “I don’t mean like silly preciousness. I mean more like elegance in terms of plating. And I think there’s a real beauty there.”

His ambitions are big, but not grandiose: He wants it to become the best Western-style restaurant in China, of which there are currently only a handful.

“I’m not going to compare ourselves to the incredible Szechuan restaurants there,” he says. “I’m not approaching it with some sort of weird, neo-colonial perspective. We want to make use of everything there and be mindful. I’m not going to come in and claim that I know what the hell I’m doing as it relates to the thousands and thousands and thousands of years of culinary tradition. I can only do what I can do.”