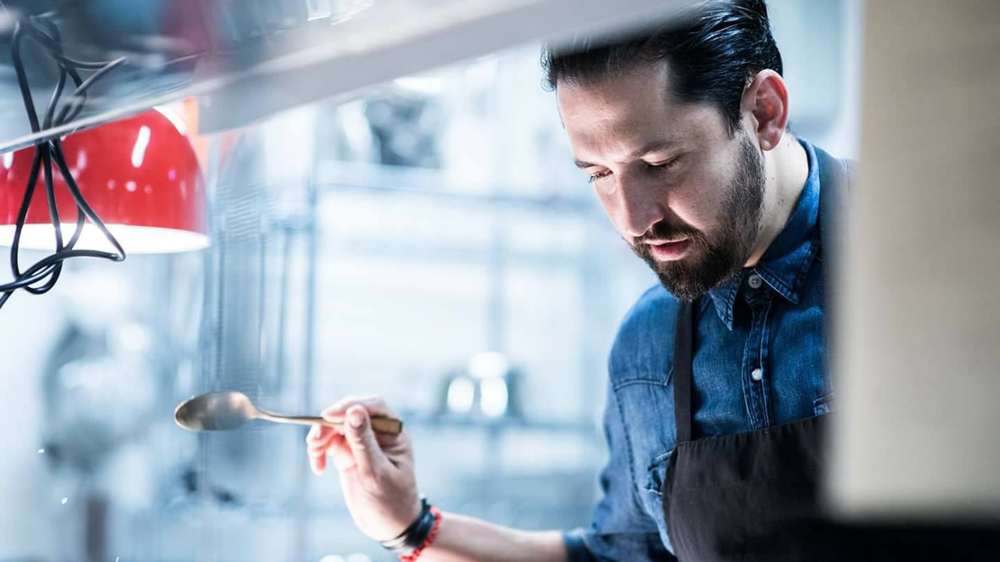 There are many good Chinese restaurants near global taco king Esdras Ochoa’s newest outpost of Mexicali Taco & Co. in Los Angeles, but the inspiration for his Cantonese-style al pastor came from a kitchen more than 7,000 miles away.

Ochoa was at 11 Westside, his Hong Kong restaurant, where he greatly enjoyed the staff meals with Cantonese dishes like steamed fish and char siu prepared by his talented cooks.

“The guys would really show off what they knew how to make, the local cuisine,” Ochoa tells Robb Report. “And I loved it. It got to the point where I was like, ‘Dude, let me try to make some stuff like that.’”

So when it was time to open his Mexicali taqueria in LA’s San Gabriel Valley, Ochoa saw an opportunity to riff on char siu. This restaurant is part of a community that’s largely Asian but also has a sizable Hispanic population. Putting his version of Cantonese-style barbecue pork on tortillas made sense here.

Plus, being back in LA made it clear to Ochoa that blending cultures while expanding the range of his cooking should be his goal. Chefs and taqueros all over this city are redefining Mexican food in unexpected and beautiful ways. After all, why put limits on what a taco can be?

“When this opening came along, I was like, ‘This is the perfect time, the perfect story, the perfect location to do this,’” says Ochoa, who opened the San Gabriel restaurant in September.

A lot of traditional al pastor recipes call for cinnamon and cloves. So Ochoa seasons his pork shoulder with Chinese five-spice powder, which includes cinnamon and cloves. Ochoa grew up in Mexicali, Mexico, where there’s a big Chinese neighborhood and where many taqueros use soy sauce to make carne asada. It was a no-brainer for him to add soy sauce to his new al pastor, which is only available in San Gabriel.

“To really tie the knot, I added some ginger,” Ochoa says. “The traditional recipes already have garlic, onion and vinegar.”

Instead of the honey often used to glaze char siu, Ochoa sweetens his al pastor with pineapple. This, of course, is a nod to how al pastor is typically prepared.

Ochoa’s new al pastor is fantastic on tortillas, but it might be even better atop nachos that are drenched in his new Austin-inspired queso, which is made with pickled Fresno chiles, heavy cream and a secret blend of three cheeses. Ochoa also has a restaurant in Austin, Reunión 19, and he’s a confident chef who loves blending influences from all his journeys.

More than ever, Los Angeles is a city where a tortilla can be a canvas for anything. And Ochoa, who started with a taco stand at a downtown parking lot in 2009 and became Netflix-famous on competition-cooking show The Final Table in 2018, is an inspiration for other LA taqueros who are splashing salsas all over their own boundary-free cooking.

Ochoa’s friend Jonathan Perez, who attended the soft opening of the San Gabriel Mexicali, is the new-school taquero behind Macheen, which just started a residency at Milpa Grille that features mole blanco tacos with dashi-braised chicken, birria tacos with a guajillo demi-glace, oyster tacos with salsa macha and purple heirloom-potato tacos. Another guest at the soft opening was Anajak Thai chef Justin Pichetrunsgi, whose new Thai taco Tuesdays showcase dry-aged seafood from fish market The Joint.

Ochoa is also a fan of Tacos 1986, where charismatic frontman Jorge “Joy” Alvarez-Tostado serves adobada tacos and mushroom tacos with a lovable swagger.

“It’s the evolution of food, the evolution of culture, the evolution of knowledge,” Ochoa says. “Especially as chefs in LA, people are more supportive now. People like me, Macheen, 1986, just showing love to each other and trying each other’s stuff, blasting each other on social media. That opens so many doors for inspiration, for flavor, for ideas. People used to get stuck on what was ‘authentic.’ But authentic doesn’t have to mean a specific style. You can be authentic to your interpretation, to your life experiences, to the flavors that really drive your passion.”

“Honestly, shoutout to Roy,” Ochoa says. “He’s such a big influence. He’s the guy we looked up to back in the day. He’s the one who really just went for it full-throttle and never looked back. He wasn’t scared, man.”

LA has now become a city where Saw Naing makes tandoori chicken fajitas and grass-fed masala beef tacos at Tallula’s, a Mexican restaurant that celebrates his Burmese and Indian roots. LA is also where Vartan Abgaryan and Mesraim Llanez serve falafel tacos and Mediterranean octopus tacos at their new Nueva cantina. At the new Mírame, Joshua Gil has a taco with pork belly, Sichuan eggplant and strawberry-tomatillo pico as well as a tostada that combines Dungeness crab with a pork terrine and ikura. At Sky’s Gourmet Tacos, which recently opened a third location that’s a downtown ghost kitchen for takeout and delivery, Sky Burrell’s “Mexican with a splash of soul” food includes lobster tacos and crawfish tacos. At Banh Oui, Casey Felton and Angel Padilla recently did a taco pop-up with birria and also the five-spiced crispy pork belly that the restaurant usually puts on sandwiches. This was the beginning of a “culinary lab” where Felton plans to experiment with different cuisines.

Ochoa, whose new Mexicali outpost also has Ensenada-style fish tacos that are crispier than what you’ll typically find in Mexico, loves seeing different interpretations of tacos.

“You really get to feel the soul of the chefs,” he says. “They’re making it because they want to share a message with you. They’re prideful and excited to show you what they think is delicious. I’ve gotten to travel a lot for work. And I get excited about things that I eat and things that I learn. I can’t take all my friends and family and fans along, but I can bring these flavors to them in my restaurants.”

Sometimes, though, the flavors come from Los Angeles itself. Ochoa’s famous vampiro has a garlic sauce inspired by local chicken chain Zankou. And at the new Mexicali, you can have your al pastor mustard-grilled because Ochoa really likes In-N-Out Burger and its willingness to customize orders.

“With the fresh grilled al pastor, you build this crust with mustard and then put caramelized onions on top,” Ochoa says. “You scrape that crust, put it on your tortilla with salsa and guacamole, and it’s heavenly.”

The result is a taco that might trigger all sorts of taste memories while also seeming brand-new. It’s Mexican. It’s Cantonese. But more than anything else, it’s barrier-breaking Los Angeles at its best.