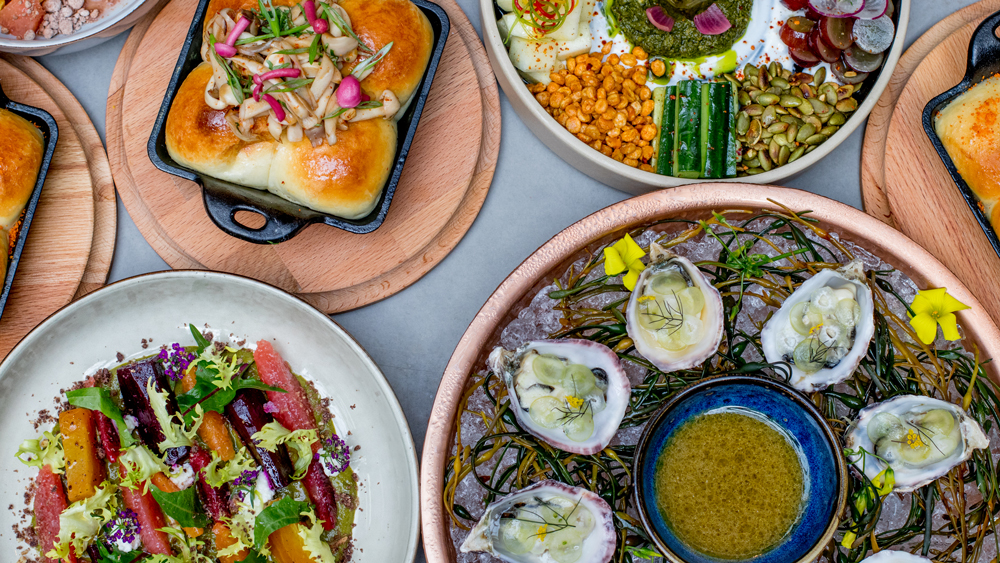 Chef Srijith Gopinathan didn’t want a tandoor in his new kitchen. Yes, he was building an Indian restaurant, but he felt the cylindrical oven—which is used widely across South Asia to bake flatbreads like naan using radiant heat—was stifling him.

“In traditional tandoor we can only make breads one way,” said Gopinathan, who goes by “Sri.” “It’s like a pot: You slap the bread on the wall of the hot pot and it cooks. I feel it is limited to one, two styles of bread. I wanted to get the same temperature and flavors of a tandoor, but I wanted it to be more flexible, where I could not just slap the bread. I also could place the bread and I also could make more delicate bread.”

So while constructing Ettan, Gopinathan’s progressive Indian restaurant opening next week in Palo Alto, he approached a pizza oven maker with his conundrum. They brainstormed and the builder returned with a custom, charcoal-fired oven that incorporates the best elements of each of their cookers. With this, Gopinathan is able to make dishes like naan buns, or his version of naan crossed with a dinner roll. He plans on serving them with homemade spreads like relish, butter and yogurt.

This is the kind of ingenuity Gopinathan is bringing to Ettan.

He comes to the restaurant from Michelin two-star Campton Place in San Francisco, where he has been starred for nine consecutive years. (He is keeping his position as executive chef there and will split his time with the new restaurant, where he is also a partner with owner Ayesha Thapar.) His work at Campton Place has been lauded for its contemporary take on classic Indian cuisine using West Coast ingredients, or what Gopinathan has dubbed “Cal-Indian” food.

“The amount of time I’ve spent in California has changed a lot in terms of how I think about putting Indian food together,” he said. “The variety of what you get [in California] is not what Indian cuisine was originally built on. Now I have an opportunity to build it in a slightly different way, with different ingredients.”

Gopinathan, who grew up in the coastal state of Kerala, in southern India, says Indian cooks do not use many raw ingredients. They prefer to dry and preserve them, so they can be stored for later use. This can be attributed to a number of reasons such as the tropical climate, which spoils food quickly. So something like chickpeas, which are grown in India, are never used fresh, he said. But he will.

In fact, he’s going to use everything available to him the Bay Area—from the vegetables to the shellfish—and apply Indian techniques and spices to them to make something wholly unique. Take paneer, for example. In Indian cuisine cooked around the world, paneer is made from buffalo’s or cow’s milk. But at Ettan (which translates to “breath” in Sanskrit) Gopinathan is making the squishy cheese from mung beans. His version is completely vegan and, according to him, does not compromise on taste.

There will also be a secret menu that Gopinathan says will include Indian comfort food dishes like butter chicken, but with interesting twists. And Ettan will offer everything à la carte, unlike at Campton Place.

Gopinathan says while awards and accolades at Ettan would be great—they do, after all, keep a restaurant in business and keep employees motivated—that’s not why he’s doing this project. He wants to bring Indian cuisine mainstream in the U.S. and “move the needle when it comes to the idea of Indian food being an ‘ethnic’ or boxed kind of cuisine.”

“Ettan is beyond that for sure,” he said, acknowledging the responsibility he’s taking on. “I love challenges. Challenges give you an opportunity to open yourself up more. If you have a challenge you force yourself to do more research, more study, more figuring out, more experimentation. It keeps you young.”

Ettan is located at 518 Bryant St., the former home of the Three Seasons Restaurant, which closed in 2018 due to a kitchen fire.