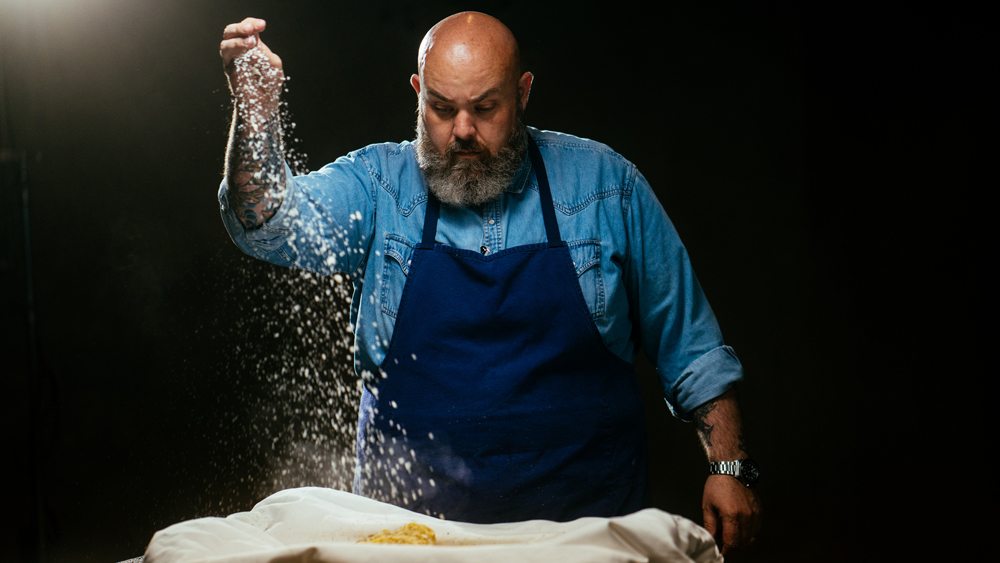 LA chef Evan Funke wants his new Hollywood restaurant, Mother Wolf, to be a portal to Rome. Funke, of course, is known for his devotion to handmade pasta at Felix, and he will have even more of it at his new destination.

“We’re running, I think, eight or nine pastas at Felix, and there will be a few more than that,” says Funke, who plans to open the 200-plus-seat Mother Wolf with Ten Five Hospitality in the coming weeks. “My ultimate goal is to provide a glimpse into how I see Rome. I’ve spent a significant amount of time in Rome, saturating myself with the styles and techniques of not just the quote-unquote ancient ways, or what is perceived to be ancient ways, of making Roman pasta but also the contemporary chefs that are pushing the envelope a bit.”

For Funke, who mentions new-school chef Sarah Cicolini of Rome’s SantoPalato as an inspiration, making pasta is about “having a firm footing in tradition but never allowing tradition to inhibit respectful progress.” So he’s putting a “gentle contemporary touch” on linguine alle vongole by using pureed green garlic instead of regular garlic to brighten up the dish. The puree, which is added at the last moment, is bright green and makes the clam pasta resplendent.

Meanwhile, Funke is getting cheese, guanciale and different flours from Italy to play the classics at Mother Wolf.

“There will be the quintessential four pastas: cacio e pepe, alla gricia, amatriciana, carbonara,” he says. “Part of my job as a culinary custodian of these histories is to tell the stories in a true and authentic manner. Within that, I get down to the molecular level when it comes to pasta and hydration and coaxing the natural terroir out of things.”

“America has done horrible things to it, added blackened salmon and peas and all this other shit,” Funke says. “We want to pay the utmost respect to these dishes but also apply a gentle hand when we’re making them more contemporary.”

Part of this is about understanding that the ethos of Italian cooking revolves around showcasing local ingredients.

“I’ve always had the approach of treating California as if it’s its own region in Italy,” Funke says. “And I’m cooking as Italians cook, with what is directly available within arm’s distance, what is hyper-seasonal.” He’s gone so far as to bring 60 employees with him to the farmers market to connect with purveyors and has even brought seeds back from Italy to share with farmers who have the right growing conditions for the produce to thrive. That will allow him to cook with Italian ingredients that have a Californian terroir.

Funke’s focus on precise flavors and combinations extends to the wood-fired pizza at Mother Wolf. He’ll serve pizza tonda (round and thin) made with a blend of Italian flours.

“The pizza is very thin, roughly 215 grams, as thin as possible but with a good amount of irregular bubbles,” says Funke, who admires the work of chef Jacopo Mercuro at Rome’s 180g Pizzeria Romana “It’s not a super-thin cracker crust. I like a Roman pizza that bites back a little bit. But it’s very light. We’re not overdressing the pizzas.”

Funke’s restaurant Felix has been one of LA’s most popular since it opened in 2017.  Photo: Courtesy Alan Gastelum

Funke knows he has strong preferences. He understands that he can be a polarizing figure. Last year, he was on Joe Rogan’s podcast and said that he doesn’t eat fresh pasta in North America.

“I don’t regret it, but I have to say, it was mid-pandemic, when the shit was really hitting the fan, and I don’t think I was in the greatest of head spaces,” Funke says. “Everything in life that I’ve done or said has been a learning experience, good or bad, and I essentially said what any Italian would say. The majority are going to say, ‘You know what, I’m not going to eat pasta in America.’ I think that I took a lot of shit for it, but anybody who’s going to draw a hard line and hold true to what they believe is going to take some. And I’m not scared of that.”

“In order to understand modern pasta-making, you have to understand ancient pasta-making,” he continues. “And I don’t think the majority of people who make pasta in this country have taken the time to do their due diligence and make it correctly. I’m not trying to shit on people that are trying. I applaud that. There’s a multitude of pasta makers who do an amazing job. I’m just saying that when chefs say, ‘Oh, we need to round out the menu, let’s throw a pasta on,’ that’s the stuff that I don’t like. Pasta should be given the proper amount of respect, and I’ve devoted my career to this, right? I don’t dabble. I live this 24/7.”

To be clear: Funke does eat pasta in America “for analytical purposes.” He says he doesn’t want to “rehash this discussion,” but he’s cordial enough to explain his intent.

“I want to eat pasta in America, I really do,” he says. “But I love to eat pasta in Italy. And anything that sits below that, I don’t have time for it. I can’t apologize for that. And on top of that, everyone’s an expert in what tastes good to them. And I can’t argue that. Everyone is entitled to their opinion, including me. For the people who disagree with me, I get it.”

Ultimately, it’s what Funke does in the kitchen that matters most. Mother Wolf might seem like a lofty restaurant. But on one level, Funke has a simple goal. Pasta makes him happy, and he wants to create delicious pasta.

Whether you think his cacio e pepe is worthy of Rome or better than any other cacio e pepe in America is going to be based on your palate, travel history and many other factors, both tangible and intangible. Food brings people together, but it also leads to intense discussions with differing opinions. So you can see Evan Funke as a living, breathing statement of purpose or as a man making noodles by hand. You can view what he does as maniacal or workmanlike. You can see his cacio e pepe as a representation of history or just as a dish you crave at this very moment.

“I want to make the best pasta in America, right?” Funke says. “And I hope that me saying what I did pissed a few people off, which it did, and pushed them to get better. I would say the same things to my cooks. I push people to get better, to hold themselves to a higher level of excellence.”

Anything less, he believes, wouldn’t be a proper homage to Rome.

“Every trip I’ve made to Italy over the past 12 years has begun in Rome,” he says. “For my money, Rome is the most important city in the entire world, if you look at history, culinary, fashion, finance, politics, etcetera, etcetera,” he says. “It’s a living museum. It’s a perfect balance of the new and the old. It’s very modern. But at the same time, you can feel the pastoral and the urban living in the same space.”