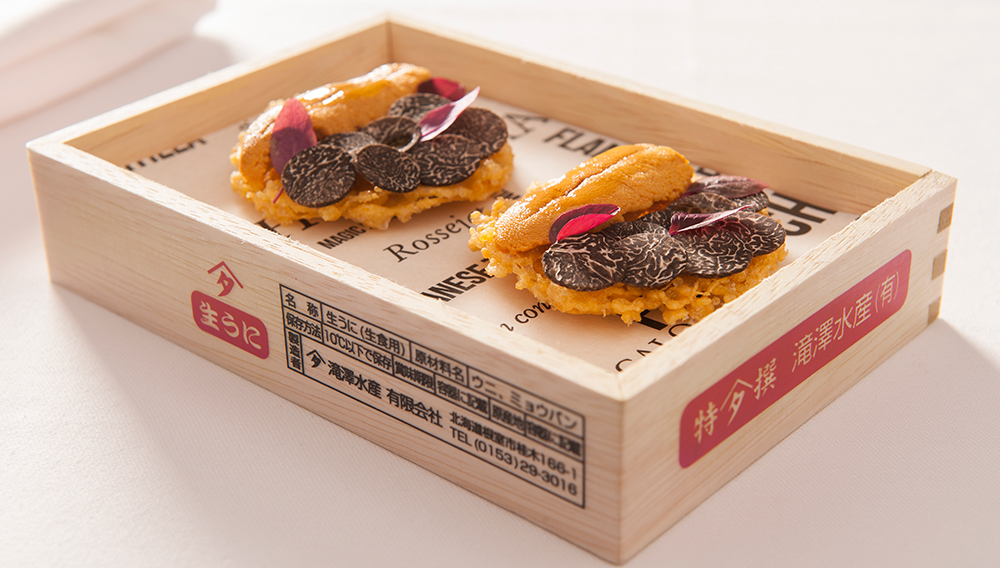 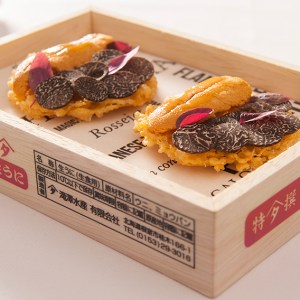 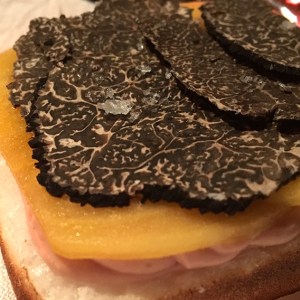 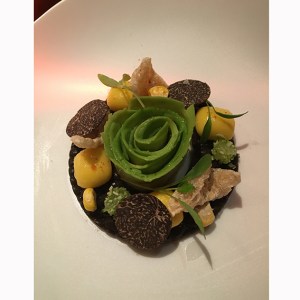 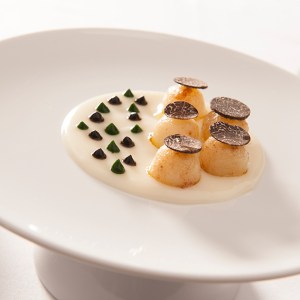 White truffles often make a big splash—their annual stardom is so brief, their flavor so delicate, their appearance so rare, that gourmands race to gobble them up. But many chefs prefer cooking with the sturdier but equally aromatic black Perigord truffle. There’s so much more they can do with them.

Chef Aitor Lozano Zabala at the Bazaar by José Andrés at the SLS Beverly Hills is among that group of toques who enjoy a playful repertoire of truffle art. Starting January 26 and running through February 25, Zabala and his team are serving up a series of truffle-tasting dinners Thursdays through Saturdays at Saam, the exclusive private dining room inside the Bazaar. Each meal consists of approximately 18 courses, with truffles chopped, sliced, diced, or crumbled into every one, often in surprising pairings. For instance, in a “piña colada,” the chef crumbles pieces of truffle over a cloud-like white coconut and pineapple spuma that floats in a dram of rum. Bright green spherified basil also dots the foamy top. Somehow, these flavors all marry well. And the chrome pineapple vessel it is served in adds a layer of drama.

In an exclusive preview of the truffle series for Robb Report, Aitor showcased a Mexican dish—La Rosa Mexicana—with a blend of textures that was as satisfying as the intermingling of flavors. A rosette of curled avocado encircled by crispy chicharrones, sweet dehydrated corn kernels, and yellow pillows of spherified corn all atop a creamy layer of huílacoche. Tiddly-wink-sized disks of truffles topped the creation before the chef poured a smoky birria sauce over the dish. Sommelier/wine director Brandon Miradi poured a rare sip of a 1999 Pingus red to match the earthy tones.

But perhaps our favorite was Zabala’s playful truffle sandwich, meant to be eaten with your hands. Between two slices of “bread”—actually a dry and tangy apple meringue—he layers a foie gras terrine; big, thick slices of black truffle; and bright yellow circles of pickled persimmon. From the side, it poses as a humble ham and cheese sandwich on white bread. The blend of rich, savory ingredients with tart fruit is a classic combination, but here it is elevated to gastronomic theater.

Other courses might include a surf clam in a saffron mussel sauce covered in minced truffle with tarragon flowers or sliced scallops and truffle tucked beneath a vibrant green cabbage leaf with fresh mozzarella in a bath of rum, buttermilk, and basil oil.

In addition to his role as head chef at Saam, Zabala is the creative director for Andrés’s ThinkFoodGroup. The Spanish chef grew up cooking at his mother’s Basque restaurant and worked at Ferran Adria’s El Bulli, which is evident in the molecular gastronomy perfected in the truffle dinner series as well as at his weekly 22-course tasting dinners in Saam. (sbe.com)