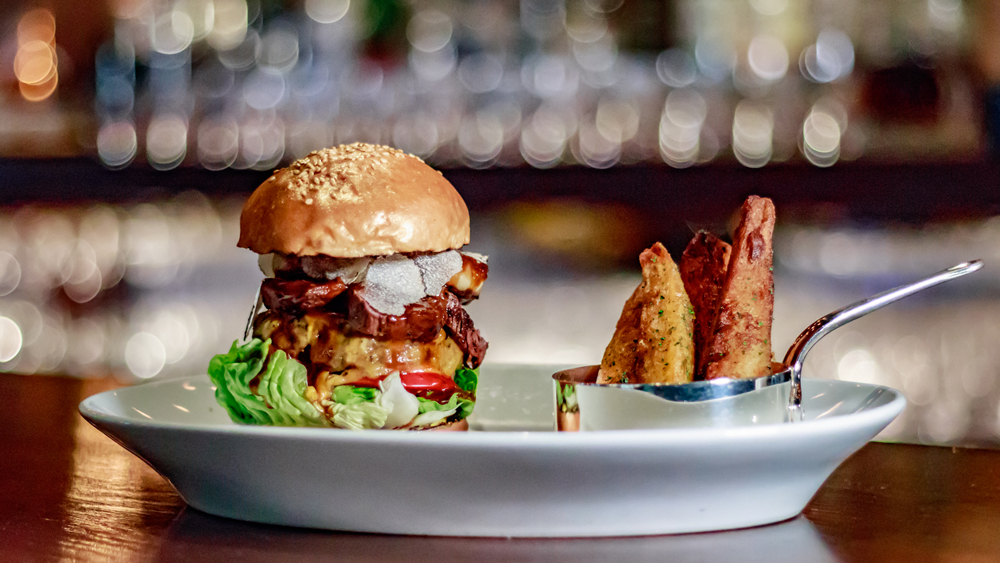 On my way to eat one of the world’s most expensive burgers I saw something that stopped me in my tracks. It had nothing to do with beef or truffles or foie gras, or anything to do with burgers, really. But it gave me a pretty good idea what I was in for as I arrived to the restaurant that would serve me a $182 ode to the new emperor of Japan.

I’d arrived in Roppongi Hills, Tokyo’s posh little city within a city that, up until 2003, didn’t exist. A sprawl of luxury retail and residential buildings emerged last decade like a proto-Hudson Yards. As I wandered past windows filled with haute brands you’re accustomed to seeing in any high-end shopping district in the world, one local boutique stood out. Through a window I spied a shiba inu perched on a pedestal, with a groomer—tiny scissors in hand—going over the pup with more care than any barber has ever given my hair. I watched a dog experience a level of luxury I rarely lavished on myself right near where I’d be dining on the day. I knew this burger was going to be a little extra.

The Oak Door, the steakhouse inside the Grand Hyatt Tokyo, would argue the occasion deserved such an over-the-top burger. Just a few weeks earlier history had occurred. For the first time in two centuries, Japan’s living emperor abdicated his throne. Akihito stepped down on April 30, clearing way for his eldest son Naruhito to ascend on May 1. A new imperial era had begun, people celebrated, the government gave everyone 10 days off work and chef Patrick Shimada created a tribute of his own.

The San Diego native with Japanese heritage dreamed up two different burgers to honor the incoming emperor. The first, he dubbed the Golden Giant Burger, weighs in at 6.6 lbs. and comes topped with luxury ingredient you can imagine inside a massive housemade bun covered in gold. It’s large enough to feed a royal court. “When you’re having a big celebration, you don’t celebrate by yourself,” Shimada tells me. The Oak Door is charging a king’s ransom of 100,000 yen, or roughly $912 for it.

Since I was alone and had no interest in re-enacting the iconic scene from The Great Outdoors where John Candy eats the entire “Old 96er” steak, I opted for the smaller Golden R Burger. This 20,000-yen ($182) version was still large enough to make me have to unhinge my jaw like a snake to eat it.

Before my moment of truth, I ventured to the kitchen to watch Shimada at work. He began with a 6-oz. portion of prime American beef that he grilled over binchotan charcoal alongside a chunk of A5 wagyu tenderloin. The burger then went under a broiler to melt the Japanese cheddar. He pulled the patty and let it rest while he sliced the dense and sweet Japanese tomato and slathered saffron-laced garlic aioli on the grilled bun. He piled on a mountain of toppings, finishing with a generous pan-seared portion of foie gras, and a large spoonful of caramelized shallots in a veal demi-glace.

I returned to my seat ahead of the burger, but the extravagance wasn’t done. Shimada proceeded to shower the whole thing with black truffles he shaved tableside. At that point, if he’d topped it with a Rolls Royce hood ornament I wouldn’t have batted an eye.

The chef returned to the kitchen and I focused on my task at hand. It was hard to concentrate with people watching this good. Around me at midday waiters in bright green gingham vests swirled, a trio of salarymen had snuck away from the office to dine, a champagne bottle popped for a couple enjoying some bubbly in front of their toddler and eight stylish ladies who lunch were most definitely not ordering anything heavier than a salad, let alone a 6.6-lb. burger.

Enough distraction. Seeing as I’m not classy enough to use a knife and fork on a burger, I smash the mountain in front of me to make it fit into my mouth. It’s not the easiest thing to eat. As I bite down, I fight against a lobe of foie escaping out the back, but the rest of the ingredients manage to stay put. The first flavor I get is of the hard sear on the iron-rich duck liver, followed by the depth of the caramelized onions and demi. Shimada uses a coarse grind on the beef patty, which gives a nice textural contrast to the soft tomato and foie. The wagyu is so tender it doesn’t impede on my bite. The lettuce does double duty: It protects the bottom bun against disintegrating from the fat flowing from the meat above it, while also adding a freshness the rich burger needs. And the dense, sweet Japanese tomatoes have just enough acidity to cut through the fat. It’s a pretty tasty burger.

However, I had some quibbles. The gold on the top of the bun only adds to the aesthetics and price tag, not the flavor. And the same can be said of the truffles as well. The spendy fungi get a little lost in the umami bomb of the other ingredients. The truffles seem to be there to say I can have truffles, as opposed to actually needing them.

Really, I only have one regret when it comes to the burger. I thought that no one would possibly order the behemoth, so it didn’t even cross my mind to try it. But I was surprised to learn that Shimada had already sold 25 in the first few weeks he was offering it. (He was kind of surprised too, he admitted.) Sure, groups bought the burgers, but I should have been order No. 26, proudly taking down the Old 96er alone for Naruhito. The celebration of the emperor at the Oak Door will continue until the end of June, so there’s still time for you to not be a coward like me and do John Candy proud.