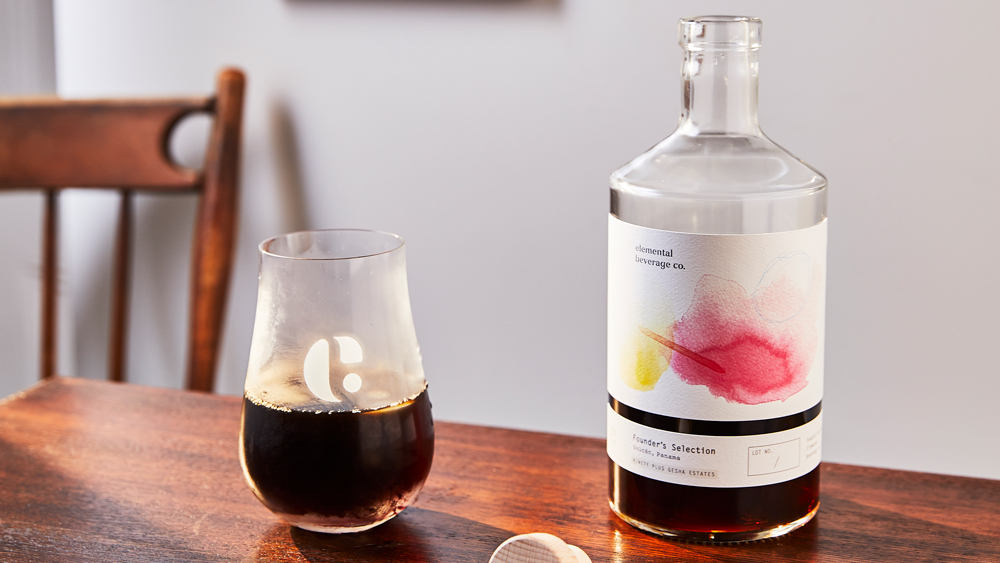 Listen, it’s summer for coffee snobs, too. So, as much as they’d like to delight in the nuance of their piping-hot, organic, single-origin, fair-trade, shade-grown, pour-over coffee, they need a respite from the heat like the rest of us. But they can’t just enjoy a bodega iced coffee or a Dunkin’ Coolatta. No, coffee snobs still need the best.

Elemental Beverage Company tells me they have the aficionados among us covered. The Massachusetts-based company has developed a cooling technology it calls Snapchill that brings down the temperature of hot coffee quickly in order to preserve more of the flavor notes in the brew. Then they package it up in an airtight can or bottle and ship it to your door.

The company sells three different single-origin coffees that highlight the terroir of their respective growing regions. But for one bottle in particular—the Founder’s Selection Gesha—they use a coveted and expensive bean that pushes the price even higher. Gesha beans originated in Ethiopia, but the ones grown in Panama have become prized by coffee purists and baristas taking home trophies in international competitions. A bottle of the Founder’s Selection will set you back $235. So, of course I had to try it.

Drinking Elemental’s top-of-the-line joe, of course, I couldn’t merely throw some ice in a plastic cup and pour the coffee on top. Elemental provides tulip-shaped tumblers so you can create an experience that approximates having a glass of wine. Instead of adding ice that would dilute the coffee, I follow Elemental’s instructions and chill the glass in the freezer and wait patiently. After 30 minutes, the moment of truth arrives.

After filling the tulip halfway, I press my nose in the glass, getting muted earthy notes, but nothing too distinct. On the first sip, it’s light-bodied and perhaps a little thin. Upon taking a bigger drink, I notice it’s not at all leaden on the palate and almost floats above my tongue when I give the liquid a quick swish. There’s an acidity that’s pleasant—not as sharp as other premium coffees tend to be these days—and a bitter note that comes through before finishing with a hint of Cognac. Overall, the bitter fruitiness reminded me of a bar of premium dark chocolate.

I couldn’t help but think about one steaming hot cup of joe in particular while sipping Elemental’s brew. A few years ago, I drank the world’s most expensive cup of coffee. Hacienda La Esmeralda Cañas Verdes’ Geisha Natural beans had sold at auction for a then-record $601 per pound, and the Southern California-based Klatch coffee bought up the American allotment and I got the chance to try it.

Though Elemental and Klatch’s coffees hailed from different plantations, both were Panama-grown Gesha beans. And while the notes in the Elemental coffee were similar to Klatch’s Esmeralda 601, they weren’t as expressive as its hot counterpart. There just wasn’t the same freshness on the palate. Could my reaction have been psychosomatic, owing to the fact that I knew this coffee was brewed, chilled and then shipped to me instead of made in my presence? Perhaps, but I think the time lag between brewing and drinking may have actually contributed to it and not just be a figment of my imagination.

What the Founder’s Selection has in common with Esmeralda 601, though, is that the finer points of this cup will be lost on the majority of proud coffee philistines. That’s not to say the distinctions don’t exist between Elemental and a Starbucks iced coffee, but it mirrors the debate between audiophiles chasing high-end sound quality and the vast majority of people who think compressed MP3s are good enough.

You’ll need to be the coffee equivalent of the audiophile in this instance for Elemental’s coffee to be worth it to you. I may fall outside of that camp. In fact, the coffee snobs probably would have had me forcibly ejected from the camp after seeing me—gasp!—add a splash of cream to my coffee before finishing my glass.