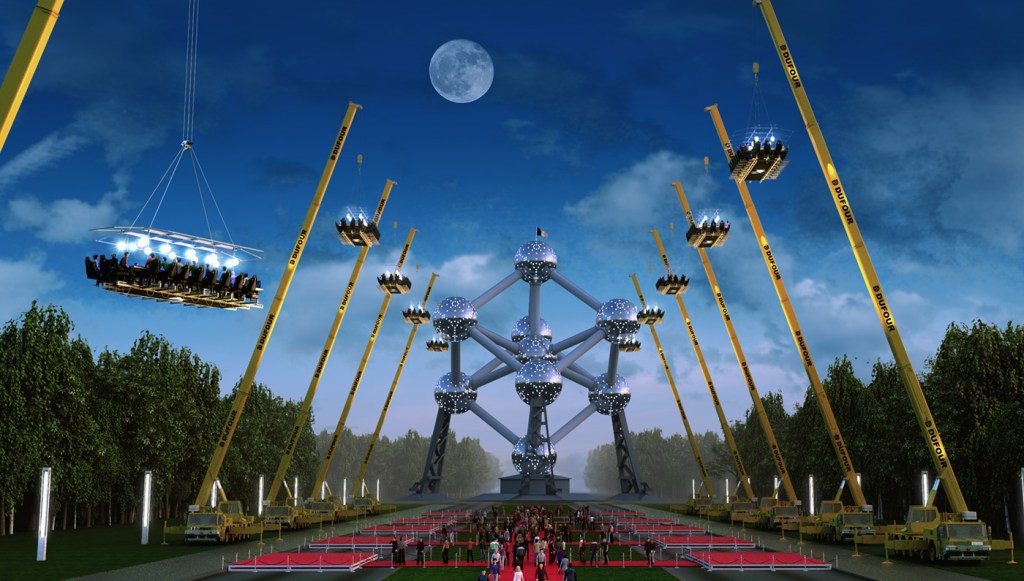 In 2006, David Ghysels and Stefan Kerkhofs created Dinner in the Sky, an alfresco dining experience that treats guests to dinner with a view. Cranes hoist standalone dining rooms more than 160 feet in the air, where guests can take in sweeping views of the city while dining on epicurean delights. The concept has been implemented in more than 50 countries, including Japan, Canada, Australia, and Brazil. Offering bird’s-eye views of famous landmarks like Sydney Bay, the City of the Gods in Teotihuacan, and the Strip in Las Vegas, the dinners provide an unforgettable gastronomic experience for adventurous foodies.

The 10th-anniversary celebration will take place in Dinner in the Sky’s birthplace, Brussels, from June 1 through 5, with the iconic Atomium—a structure built for the 1958 World’s Fair that is shaped like the atoms of iron crystal—serving as the backdrop. Ten Michelin-starred chefs—including Yves Mattagne, Pascal Devalkeneer, Filip Claeys, and Viki Geunes—will cook scrumptous meals for a select few. Guests who need to use the restroom during dinner simply notify the waiter, who arranges for the table to be brought down to ground level in a process that takes less than a minute. The dinners last for 3 hours, 1.5 hours of which take place up in the sky. The cost is around $313 per person. (dinnerinthesky.be)