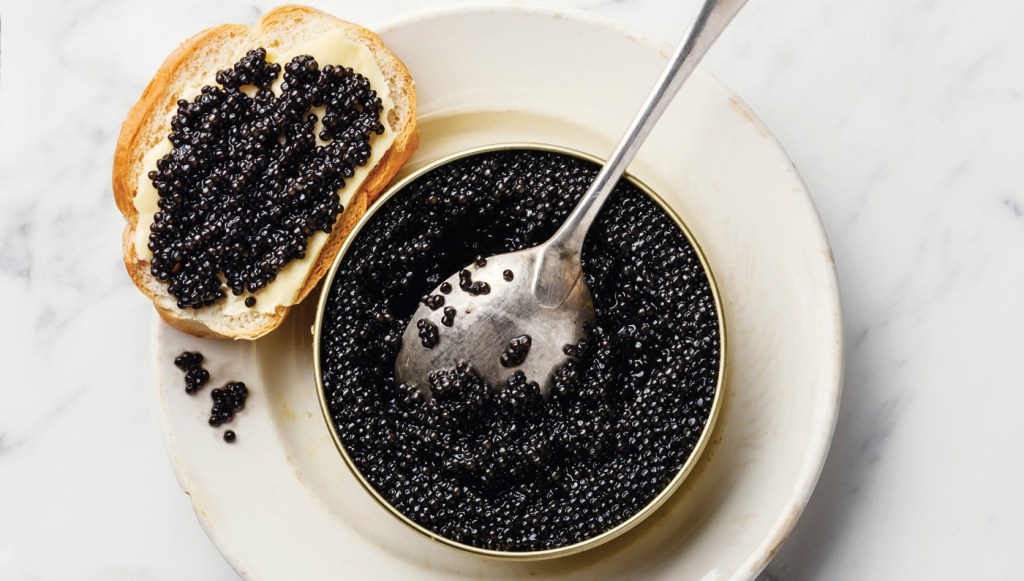 Once upon a time the sturgeon reigned supreme among all the freshwater fish. Queen Beluga wore the crown and was lauded for the wisdom of age, her great size, and her most delicious roe. One day, however, the numbers of her royal family became so few that her realm collapsed, and sadness spread across the land. Chefs and fishermen and venture capitalists wept tears as salty as the caviar they so missed. But then a group of wizards cast a powerful spell, creating a new world in which the fish could thrive, so the sturgeon’s tale just might have a storybook ending after all.

While a spell might have sped up the shift if this were indeed a Russian fairy tale (such stories are well stocked with sturgeons), this new world has come about instead because of significant changes in the caviar industry. The sturgeon, from which all true caviar is harvested, is a rather remarkable animal, having survived relatively unchanged for roughly 200 million years. The beluga sturgeon is the largest freshwater fish in the world and can live as long as a century. While the sturgeon’s precious roe has long been prized, in the last decade the ways in which humans obtain it have changed drastically.

Caviar used to be relatively simple: The best was Russian or Iranian, wild, and from the beluga, sevruga, or osetra species of sturgeon. About 10 years ago, because of overfishing that critically endangered wild sturgeons, the United States Fish and Wildlife Service and the Convention on International Trade in Endangered Species put a series of bans and trade embargoes in place, making caviar from wild sturgeon illegal to import to the States.

For some nostalgic connoisseurs, caviar will simply never be what it once was. The upside of that change is that in order to meet demand, quality farmed caviar has risen to meet a bar of excellence and consistency that, in some opinions, actually exceeds the wild-sourced days of yore. Where farming caviar was once looked down upon, it is now the method of production for some of the best caviars in the world, and certainly the best available in the United States.

State-of-the-art caviar farms have emerged in the States, Europe, Israel, and China. The improvements are chiefly the result of university research. “The sturgeon has been studied intensely in the last 10 years,” says Rod Browne Mitchell, the owner of Browne Trading Company, a top caviar supplier in Portland, Maine—“its bio-characteristics, habits, and diet. Every farm has its own special diet they feed the fish, and that makes a difference.” Other nuances, he says, can be traced to the ripeness of the roe when it is harvested, which is usually a decision made by sight by the farmer after extracting a sample of the roe, and the age of the fish at harvest (the older the better). To hasten maturation, some farmers use injections of natural hormones from male sturgeons, which are not banned in the United States, but Mitchell believes better eggs come to those who wait for the sturgeon to mature naturally. The brine mixture and length of curing of the savory beads determine the final notes of flavor.

If there is a downside to the proliferation of farmed caviar, it is confusion in a marketplace that has been turned on its head. But with a little education and a trusted supplier, exploring the new world of caviar can deliver a delicious payoff.

“There’s a lot of bastardization when it comes to caviar,” says Ian Purkayastha, owner of Regalis Foods and author of the forthcoming book Truffle Boy. “There’s a lot of mis-labeling. The only way you can really know what you’re buying is to look for the Latin name on the label, and that isn’t always listed.”

The name beluga used to be the familiar hallmark of quality. But beluga (Huso huso) is now banned domestically. Instead, consumers are presented with an array of choices in an industry with very little regulation of packaging and labeling. There are just a few main species of sturgeon from which we now source caviar, says Christopher Klapp, the general manager of the West Hollywood, Calif., caviar importer and retailer Petrossian. “Think of them like wine varietals,” he says. The best-known of these is osetra (also known as Russian sturgeon), which is farmed all over the world, “but sometimes domestically farmed white sturgeon is mislabeled as osetra.”

Many labels do not provide accurate information about region of origin or species. Paddlefish roe is often marketed as caviar, but because the fish is not a sturgeon it does not produce true caviar. Ideally, consumers should look for the Latin name of the sturgeon species, which begins with either Huso or Acipenser. Purkayastha recommends being wary of any odd-sounding ingredient on the label. “The only ingredients that should be listed are fish roe and salt,” he says.

While there are standards for determining quality with regard to flavor, color, and texture, personal preference plays a role in deciding which kind of caviar gets the highest marks. Of the four main caviar-producing sturgeons (and two popular hybrids), there is no clear consensus about which is best. Some connoisseurs look askance at caviar farmed in China; others believe that kaluga, farmed exclusively in China, is the closest thing on the market to beluga. Unfortunately, pure kaluga, like its cousin beluga, is illegal to import. All “kaluga” caviar sold in the States is actually a kaluga hybrid. Siberian sturgeon is growing in supply and popularity, in part because it takes only 5 years for the fish to reach optimal age for caviar harvest (compared with the 12 or more necessary for other varieties), but it remains less prized than osetra or white sturgeon. Some connoisseurs place the greatest value on osetra farmed in Europe. Mitchell extolls the virtues of the osetra from Royal Belgian Caviar, in particular, because the farm allows its fish to reach 12 to 15 years old before the caviar is harvested, and it has an on-site expert in fish food. The color of the caviar is a light brown to golden yellow, and its taste has a clean salinity.

But many, including Mitchell and some notable chefs, also appreciate caviar farmed in Idaho as the loveliest, creamiest, and most complex roe taken from white sturgeons because of the pure spring waters there that are constantly replenished. When pushed to the roof of the mouth, the caviar has a natural pop from the salt curing, something common to all great caviar. Mitchell warns that if caviar is mushy, it either is past its sell-by date, was harvested before its time, or was stored at an improper temperature.

Klapp says that individual preference is where the fun of caviar comes into play, and that focusing on country of origin is perhaps misguided. “There are great producers all over the world,” he says. “Because the roe is so valuable, and because sturgeon take a very long time to raise, these fish are kept in extremely controlled environments. There are no shortcuts to getting great-quality eggs.” Reputable companies such as Regalis, Browne, and Petrossian (the largest caviar company in the world) deal only with farms that adhere to certain excellence and sustainability standards. Beyond that, the financial impetus is to produce at the highest quality and subsequently garner a higher price.

Chef Michael Cimarusti (who sources his caviar from Regalis) serves that Idaho white-sturgeon caviar at his L.A. seafood fine-dining restaurant Providence, in part because he loves the flavor and in part because he is a proponent of sustainable aquaculture. “If it’s farmed in the U.S., I at least know there are standards in place,” he says. “If you’re truly worried about sustainability and responsible farming practices, buying U.S.-produced caviar is probably the safest thing.”

But Cimarusti also serves a golden osetra that comes from Bulgaria; many farms in Europe and Israel have impeccable reputations for sustainability and also quality. “You have to trust your supplier,” he says. Or your favorite chef.

Now, once again, with the help of the royal tastemakers and the university wizards, there is nothing in the world quite like good caviar. The fishermen have become farmers, the chefs have dried their tears and invented new dishes, and the venture capitalists have piled the briny beads upon their plates. And the sturgeon expands her realm across the globe.