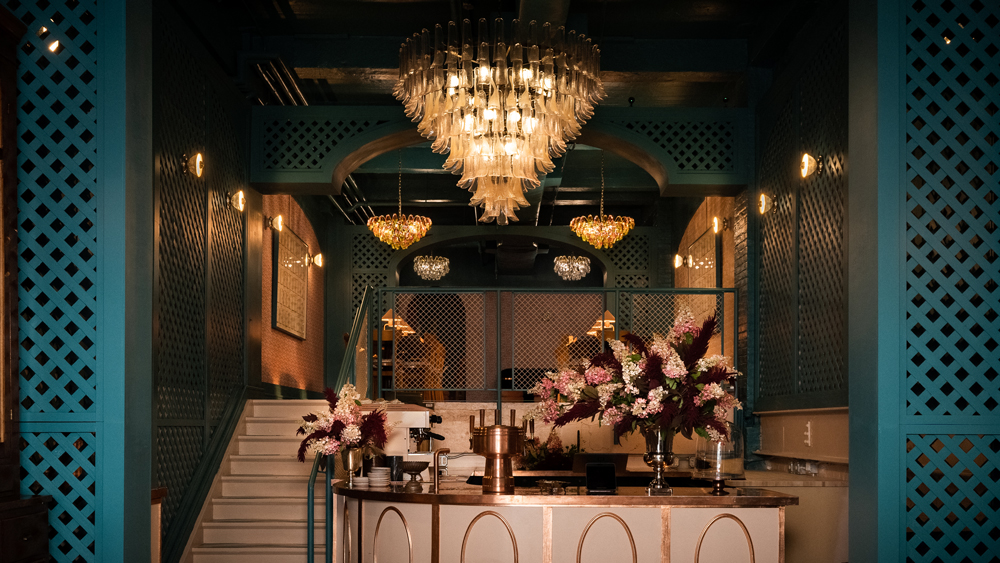 If you’re going to create a second outpost of New York City’s most stylish coffee shop, you might as well do it on one of the city’s most fashion-forward and luxurious blocks.

So Felix Roasting Co., known for its specialty coffee, its transporting interiors from celebrity designer Ken Fulk and its over-the-top drinks like an espresso tonic that features housemade tonic water infused with Persian lime and cardamom, is opening at 104 Greene Street in SoHo on Tuesday and we’re giving you a first glimpse inside.

Felix’s beautiful cups with copper foil fit in nicely on a block where there’s a steady stream of shoppers with yellow Louis Vuitton shopping bags. Their neighbors will also include Stella McCartney, Dior, Chloé and Tiffany & Co., making Felix stand out as the only food-and-beverage outlet on the block.

The original Felix, which founder and owner Matt Moinian opened at 450 Park Avenue South in 2018, did the unthinkable: It got downtown scenesters to go north of 23rd St. and hang out in a coffee shop. It also got the fashion set, including Zac Posen, to post Instagram photos from a coffee shop. Felix has also been a regular destination for style-seeking tourists (including many women from Asia) who love the coffee and the lush Fulk design with brightly colored wallpaper, terrazzo floors and a hand-drawn mural.

One Instagram favorite at the original Felix is a $15 hickory-smoked s’mores latte, which Moinian plans to offer in SoHo soon. That drink is smoked at the counter in a glass dome. Felix makes its own marshmallows, which are only used for the s’mores latte.

A flair for the dramatic.  Photo: courtesy Felix Roasting Co.

This sums up the ethos of Felix, where every detail is extremely specific and “nothing comes off the shelf.”

The SoHo outpost isn’t a copy of the Park Avenue South location.

“We give an homage to the neighborhood,” Moinian said of the 1,500-square-foot Greene Street coffee shop, which has 60 seats inside and 30 seats outside (inside will be closed for the time being but the outside seats will be open immediately). “This is SoHo-inspired. It’s a little more architectural. It’s a tad industrial.”

But it’s also overtly maximalist. There are custom garden trellises. (In his design statement, Fulk said he wanted to “apply the all-out layered aesthetic of Felix to the classical realm of an English cottage garden.”) Century-old apothecary cabinets were shipped from the Ukraine, and a giant chandelier was delivered from Venice. There’s a copper-plated bar and custom-coated machinery. There are two and only two colors of Farrow & Ball paint: Vardo (a rich teal) and Setting Plaster (a dusty millennial pink). The design of both the wallpaper and the copper foil on Felix’s cups is hand-drawn.

The attention to detail involved in sourcing Felix’s coffee is equally striking.

“We buy directly from farmers all over the world,” said Moinian, whose current favorite coffees at Felix include Ethiopia Keffa Wush Wush, produced by Dinkalem and Shimelis Ademe. “‘We taste the crop every season. And if it’s good, we buy the entire lot. Otherwise, we pass. Doing it this way means the flavor of our coffee totally evolves every three or four months, but the quality will always be the same.”

The process of one coffee started when Felix told Elgar Ramirez in Huila, Colombia, to go crazy. The coffee producer used a carbonic maceration process adapted from winemaking to break down ripe cherries and create Felix’s deeply fruity but balanced Castillo.

Because New York City water is so pure, Felix has a proprietary filtration system that adds a mineral solution for specific beverages. There’s a filter just for espresso, another for filter coffee and another for still and sparkling water.

Felix also makes its own chai blend and mocha blend. Instead of jugs with lukewarm nut milk, Felix has temperature-controlled on-tap almond and oat milk that are made with the coffee shop’s own recipes.

Despite all its lofty ambitions, Felix is a place where most drinks are in the $3 to $6 range.

“What I love about Felix is that it’s a luxury product, but it’s a democratic luxury project,” Moinian said. “You don’t have to be super-expensive to be super-luxury. The luxury’s in the atmosphere. It’s in the products. It’s in the service. We’re delivering that experience for the price of a cup of coffee. The time and effort is really luxurious. But it’s supposed to be for everybody at the same time, because that’s what coffee is.”

Meanwhile, those who decide to splurge on a $10 espresso tonic will get a concoction with Felix’s housemade tonic water, three types of basil, lemon zest, rose-water spray and a Campari reduction. This is served in a Bordeaux glass with a shot of chilled espresso on the side.

The inside awaits the end of Covid-19 restrictions.  Photo: courtesy Felix Roasting Co.