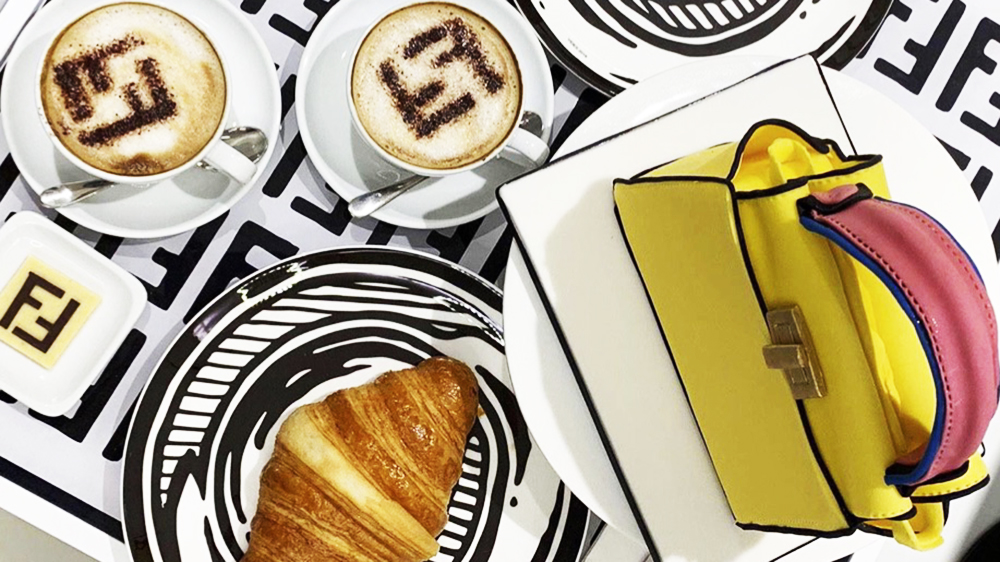 Since Karl Lagerfeld sketched Fendi’s first Double F logo back in 1965—in a reported three seconds, no less—the iconic insignia has been through hundreds of variations. We’ve seen it emblazoned on everything from BMX bikes to Kanye West’s head, and now, for the first time, the acronym of the famed fashion house has been placed atop the foam of a latte.

That’s thanks to a recent collaboration between LA-based artist Joshua Vides and storied London department store Harrods, which has just launched the ultra-Instagramabble Fendi Caffé. Located on the fifth floor of the Brompton Road store, the three-room pop-up installation is a Fendi-themed wonderland in which the monochromatic monogram is featured on furniture, walls, plates, tables, crockery and the floor. Nothing is off-limits, you can even order a decorative Fendi cake, coffee, or bag-shaped cookie.

Vides, who has amassed 144,000 followers on Instagram, is best known for his hand-painted black-and-white creations which are somewhat reminiscent of Roy Lichtenstein’s. He uses thick, bold lines and a comic book-esque aesthetic, which is at once striking and memorable. Thankfully, Vides’s effortlessly cool touch—and Fendi’s trust in his artistic chops—has prevented the space from becoming overly kitsch or tacky. (It also helps Harrods is one of the classiest department stores in the world.)

“Fortunately they approached me at the beginning of the year and they were like ‘hey we have this idea in mind are you interested?’ Obviously I said yes and then from there it was a very organic build-up to where we’re standing now,’ Vides told Hypebeast.

The Fendi Peekaboo Bar at Harrods  Courtesy of Harrods

The Fendi Caffe reflects the brand’s heritage in its bespoke Italian-inspired fare: think antipasti, beef carpaccio, the house special, aubergine parmigiana and more. In addition, there’s a Fendi Peekaboo Bar where customers can create their own custom version of the coveted Mini Peekaboo handbag, with a myriad of different materials and colors available. And a Men’s Piazza pop-up, where the latest Fendi accessories from Fall/Winter 2019 will be on display, including the men’s debut of the Baguette.

The Fendi Caffe will be open for visitors until the end of August, while the Peekaboo Bar will only run until July 28.