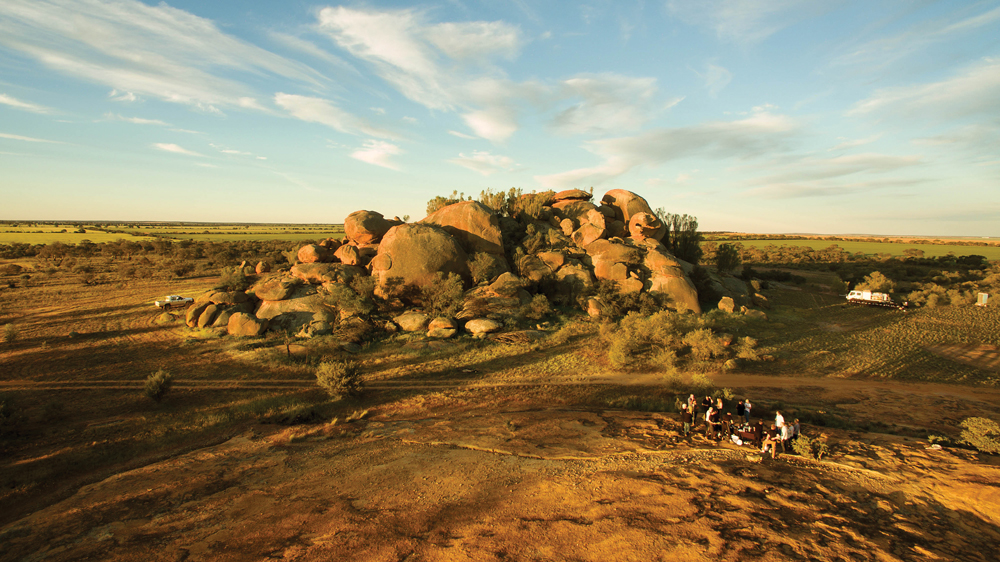 “It’s important to acknowledge where the plants come from,” says Paul Iskov of Fervor, a roving pop-up restaurant in Australia. Depending on the day, he and his fellow cooks are in some remote part of the country to serve a meal inspired by the land. Tonight, he’s crouching in the sand, gently pressing the leaf of a plant between two fingers. He stands and scans the beach for any edible plants to incorporate into tonight’s meal. There’s not much to forage on Western Australia’s Meelup Beach tonight, so he makes his way back to his van parked nearby. Kitted out with flaps that reveal endless drawers and shelves filled with ingredients and utensils, Iskov’s van is his traveling kitchen, from which he serves the most exciting meal you can get Down Under right now.

Beneath towering jarrah trees, diners sit at a public picnic table, which Iskov’s partner, Stephne Pronk, has spruced up with a tablecloth. Tonight the playlist will be the sound of the ocean. Pronk opens a bottle of Brave New Magical Animal wine, an unfiltered Chardonnay from the continent’s southwest tip. “They make interesting wines, which they infuse with native botanicals,” she says as she pours a glass of hazy liquid. It’s an appropriate pairing for tonight’s dinner of native ingredients, which Iskov has foraged from Aboriginal country.

“You have to have a license to forage” on those lands, he says. “We always remain respectful of indigenous cultures.” Foraging has become trendy beyond Australia, but for the Aboriginal peoples it has been a way of life for millennia. The respect for the ingredients and those who have long used them is key to Iskov. “We want to learn about the food, but we also want to learn about the traditional cultures,” he says.

To create the meal, he combines indigenous ingredients with a serious pedigree. Having worked under culinary heavyweights Enrique Olvera, Alex Atala, and René Redzepi, Iskov is no stranger to high-end, multicourse menus—which, to the diners’ delight, is what they get. Dollops of kangaroo tartare are served on a smooth wooden board, and marron (a local lobster) is delicately wrapped and cooked in bark and plated on a glossy, charcoal dish. By the end, the light has dimmed and the air has turned cold. Diners linger and dream of camping out in the nearby tent so they can wake to the chirps of kookaburras and a Fervor prepared breakfast of eggs and native bacon. But even if they did, Fervor wouldn’t be here in the morning. This restaurant has places to go, people to feed, and edible plants to discover elsewhere.