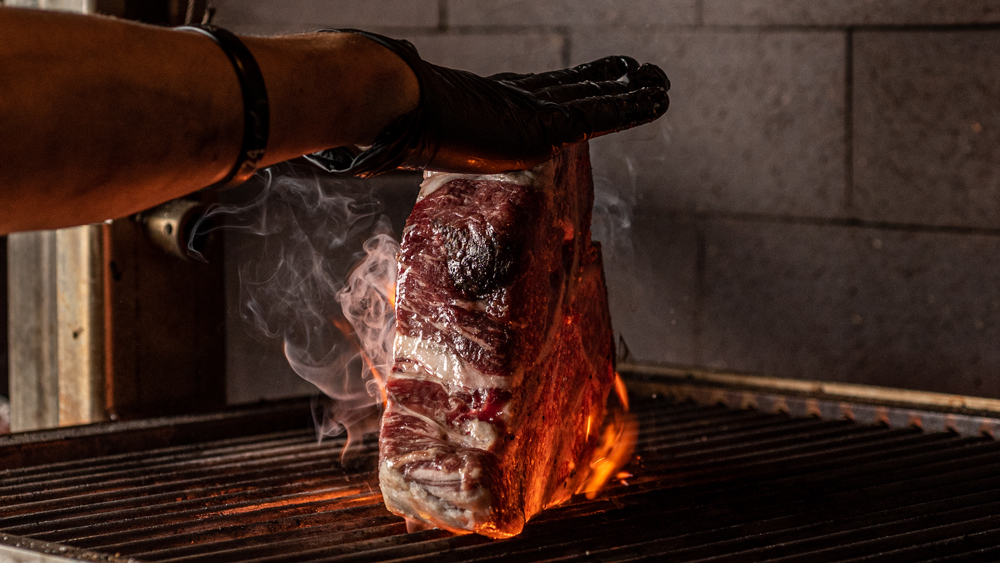 In the pandemic era, having an amazing patio space is a godsend for a restaurant. But chef Brendan Collins and business partner Michael Greco had an uncommon problem: Even before Covid-19 hit, their patio at Fia—which opened in 2019 in Santa Monica, Calif.—was a little too inviting. “It has always been really difficult for us to seat the inside,” Collins says.

As indoor dining fully reopened in California, the same problem remained—everyone wanted to dine on the picturesque patio—so the duo decided to make a change. Collins and Greco would turn one restaurant into two distinct places. Fia, which is devoted to a blend of coastal Italian and California cuisine, would continue as an alfresco restaurant. And the dining room would be transformed into an intimate 48-seat Italian-inspired steakhouse called Fia Steak, which opens tonight.

The menu is built around the steaks Collins is aging in-house, like the Costata di Manzo that’s a 60-day-aged prime boneless ribeye, the Bistecca di Controfiletto that’s a 16-oz. 45-day-aged New York strip, and the big boy porterhouse, a 50-oz. 45-day-aged Bistecca alla Fiorentina. You won’t see that on the menu, but those in the know can order it for $350. Regardless of which cut you choose, Collins has decided to prepare them all over open flame.

“I love the flavor of cooking meat over the grill,” Collins says. “It’s so primal and so ancient—why would you want to cook it any other way?”

Well, to cook over fire, they needed a grill first. Collins and Greco, along with Adam Picker of the firm Morpheus Design, created a kitchen space where there previously hadn’t been one. They blocked off a pair of French doors and in their place put dry-aging fridges. Then they removed the existing fireplace, put in Santa Maria grills and also installed a large antique butcher block as an island dividing the new kitchen from the dining room.

On those big grills and inside the dry-agers, Collins will go beyond just steak. He’s playing around with aging lamb and fish, too. He’s also dry-aging pork shoulder and serving it with apple and fennel pollen, grilling Maine lobster and the English chef with French culinary training knew early on he’d want a Dover sole on the menu. “It’s such an elegant fish and the way it cooks over the fire, the skin gets crispy, but then it’s still so tender when it comes off the bone,” Collins says of the dish he’ll serve with béarnaise and grilled lemon.

He’ll also feature giant seafood platters, caviar bumps and meat grinders that allow Collins’s team to prepare steak tartare right in front of diners. “We wanted to make sure we did things tableside because we wanted people to feel part of the restaurant,” Collins says. “It was about making it interactive and intimate.”

In the restaurant’s test runs before opening, Collins saw how involving diners in the meal—like how people can go up to the dry ager and pick their cut with the chefs—got people moving around and created an energy in the room. It reminded him more of throwing a house party than running a restaurant. And that’s exactly what Collins and Greco are aiming for. Fia Steak should be a boisterous night out, so they’re serving food and running a service that fosters that atmosphere. This isn’t a contemplative Nordic tasting menu restaurant that they’ve created.

“Time is precious and you want to make sure you’re spending your time and hard-earned money on a good time,” Collins says. “I don’t want to be challenged, I want to enjoy my food and enjoy the show.”