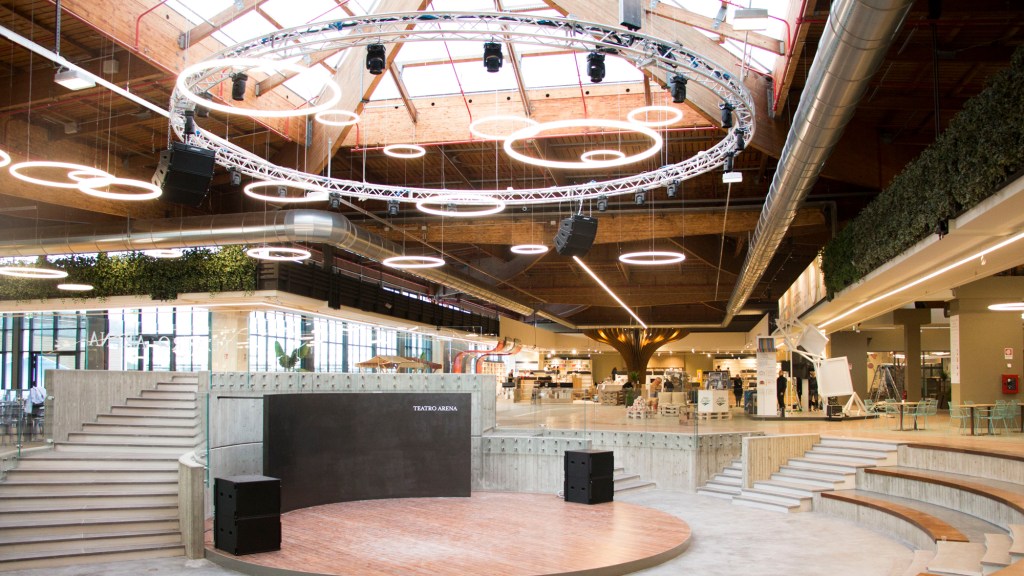 In ancient times, food was just for sustenance; now it’s entertainment. Fast-forward a few millennia, and food became a night out at a restaurant. The last few decades saw food become TV shows. In recent years, Top Chef and Nathan’s Hot Dog Eating Contest have turned food into a competitive sport. And now, with the opening of FICO Eataly World in Bologna, Italy, food is a full-on theme park.

“There’s like, there’s everything. There’s whole buildings of people making salami and prosciutto, cheeses, dairy, grinding wheat, making pasta, canning tomatoes, roasting tomatoes. Every single thing will be there in a Disneyland format,” Mario Batali giddily tells Robb Report. “There won’t be a roller-coaster, but it doesn’t need one.”

Sure, there isn’t a rollercoaster, but this nearly 25-acre interactive ode to Italian food does actually have “rides” for adults. They’re six interactive exhibits called educational carousels where adults can learn about human’s relationship to fire, the Earth, wine, and much more. And that’s just once slice of what will be housed at the world’s largest Eataly. It all sounds so gloriously bonkers.

FICO Eataly World (FICO is an acronym for Fabbrica Italiana Contadina, which roughly translates to Italian Farming Factory) will be nearly 20 times as big as the Eataly that just opened in Los Angeles. The sheer tonnage of what’s available there is what astounds.

There are 40 different places where you can watch how meat, fish, cheese, pasta, oil, beer, and confections are crafted. For those who want to make their favorite Italian foods themselves, 30 to 50 cooking classes and events will happen each day. And, most importantly there will be 45 places to eat and drink throughout the complex. It’s so big that Italian bicycle maker Bianchi has supplied tricycles with attached carts to cruise around the grounds and shop.

What makes it different from other Eatalys you’ve been to is that you get to see the whole production process from farm to table. There is an actual working farm on site that you can tour. It’s not a matter of, ‘Hey, let’s have some animals around here.’ There are six breeds of beef cattle, four dairy cows, five types of pig, three sheep, three goats, bees, three aquariums for fish, hens, geese, two types of rabbits, and even three kinds of donkey.

While admission to the park is free, there are numerous ways to spend your money, from guided tours to wine tastings to pasta-making classes. If you’re taking the time to fly all the way to Bologna to experience it, you should probably book ahead.