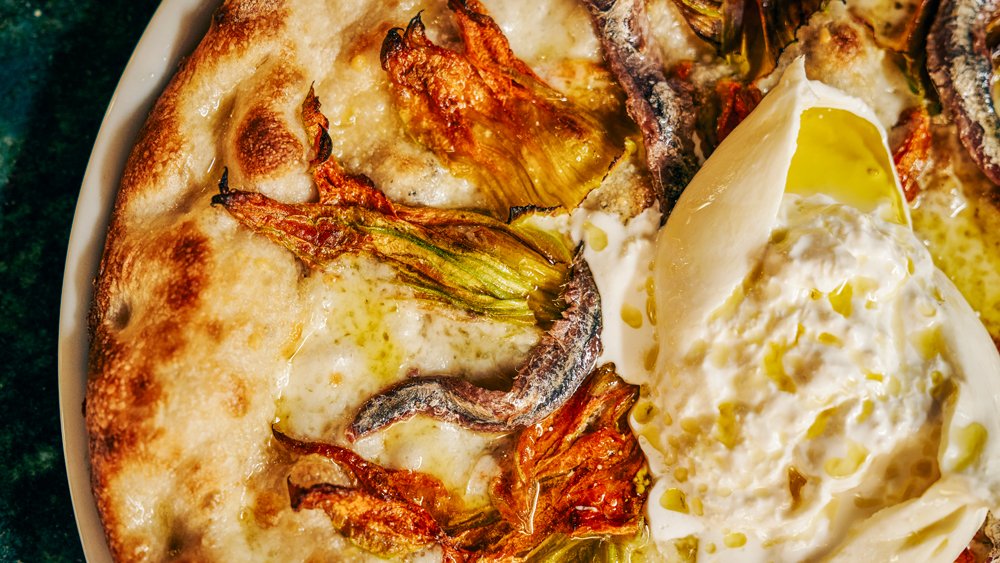 From the buildout to menu development, opening a restaurant can be a years-long ordeal. In the midst of a global pandemic, you’d be excused if it took even longer. Not so for chef Evan Funke and Relevant Hospitality’s new joint venture that opened over the weekend in Hollywood. “We flipped this restaurant in six weeks from stem to stern,” Funke says. “That’s almost unheard of—it was extremely stressful.”

The result is Fingers Crossed, a Roman-inspired pizzeria from the chef behind the acclaimed Venice temple of pasta Felix. “I can’t travel, I miss my friends in Rome and I love Roman food—it’s my first stop when I go to Italy,” Funke says about the inspiration behind his new place. The 70-seat restaurant features an open-air layout to make each table compliant with LA County’s current indoor dining restrictions. While there will be pasta, the star of the show is the crispy, thin-crust pizzas that are a nod to Funke’s favorite places to eat in Rome, like 180g Pizzeria Romano.

The short journey to open Fingers Crossed began about eight weeks ago. “It kind of fell into my lap,” Funke says. The chef had previously been in discussions about possible projects with Relevant—a real estate development and management company that focuses on hotels, restaurants and nightlife in LA—when they presented him with an opportunity. The TAO Group’s pizzeria and bar Luchini had closed, and Relevant asked if Funke would be interested in checking out the kitchen and unused space nearby. He agreed to hear them out, albeit reluctantly.

“At the time, I wasn’t really sure if Felix was going to be okay—so I wasn’t ready because I needed to know my baby was going to survive,” Funke says. “When it became apparent my extraordinary staff at Felix was ready to keep going forward safely, securely and tight, then if I’m given the opportunity to create more jobs and I have the time and the juice to do it, then it’s my responsibility to do that. So I did it.”

Attached to Relevant’s Dream Hotel in the heart of Hollywood, Luchini served slices to people pouring out of clubstaurants nearby until 3 am. Fingers Crossed bypassed using Luchini’s existing indoor space and built out the unused courtyard to achieve a more neighborhood vibe, serving pastas (extruded onsite) including carbonara and cacio e pepe and a handful of fried snacks, like cheese-stuffed squash blossoms, prosciutto, cheese and more.

Because the space used to feature New York-style pie, Funke inherited a deck oven, so he’s tinkering with his dough recipe to get the right level of crispiness—one that reminds him of the pizza at 180g. He’s opening with 12 different pizzas, drawing on in-season California produce from the likes of Kong Thao Farms. “Tomatoes are everywhere right now, so the menu reflects that, with heirloom tomatoes and beautiful cherry tomatoes,” Funke says.

On top of wanting to generate a few more jobs in a tough economy for restaurant workers, a portion of the profits at the restaurant will be donated to organizations including Black Lives Matter and the Independent Restaurant Coalition.

To start, Fingers Crossed is a six-month partnership between Funke and Relevant, and they’ll revisit the agreement later to see if they want to continue. That makes the most sense for Funke right now with how quickly the restaurant world is changing during the pandemic. For example, takeout business was brisk for Felix early on, but as more restaurants got in the game, demand dropped. So he’s gone exclusively to serving guests at the restaurant like before, except this time on the new patio they’ve created. Since then, the restaurant has stabilized.