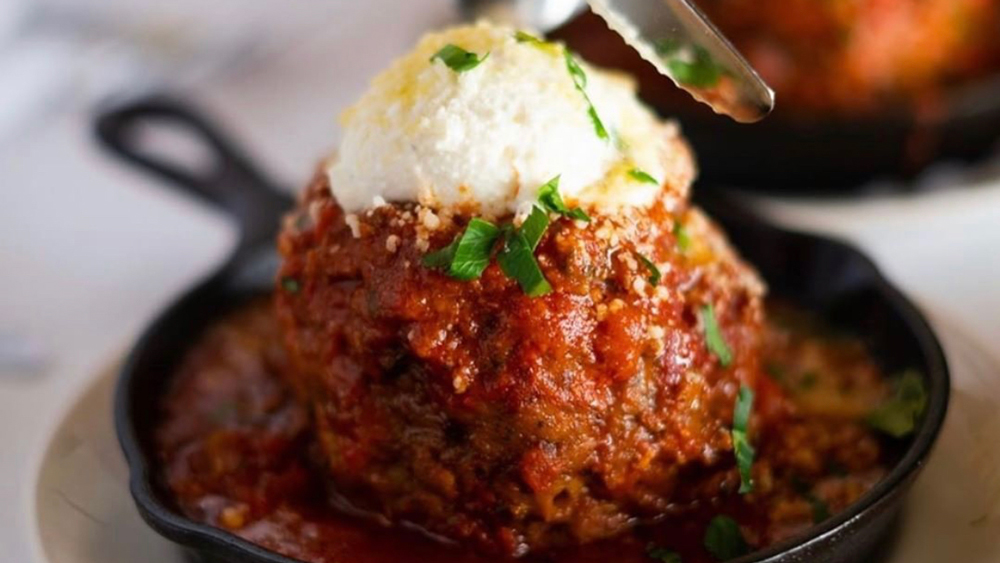 The Los Angeles outpost of Lavo Ristorante will open on West Hollywood’s Sunset Strip in mid-March, so let’s start by answering the biggest and most pressing question: How, exactly, do you make a 1-lb. meatball?

For chef-partner Ralph Scamardella and Tao Group Hospitality, which also has festive Lavo outposts in Las Vegas and New York, you do it in 30-lb. batches. Scamardella—an Italian immigrants’ son who grew up eating red sauce in Brooklyn—bases his meatball on an old-style recipe from his mother. Scamardella knows he’s transforming Italian peasant food into a luxury item, so his meatball has a mix of Wagyu (including chuck and knuckle meat), veal and housemade pork sausage.

“Meatball is one of those old-time Southern Italian comfort foods that started out way back when poor people had nothing to eat,” says Scamardella, whose parents were from Naples. “So they took a little bit of meat and put in five pounds of bread. And now it’s transformed itself with this ball of meat here in America. It’s just so much meat. We use Wagyu beef, which is really fatty. For us, the key is that we grind everything in-house. We make it all by hand. If you’ve ever had meatballs where you can’t really tell if it’s meat or it’s kind of pasty or gritty, it’s because it’s overmixed. Usually, people do big batches with machines.”

Lavo’s gigantic meatball is a signature dish that has become a crowdpleaser in Las Vegas and New York, but the 250-plus-seat West Hollywood Lavo will be a different kind of Italian restaurant than its siblings. One significant difference is that there isn’t a nightclub attached to the restaurant like there is in Las Vegas and New York. (The Vegas Lavo, especially, has had many wild evenings, like the 2012 night that a star-studded group including Leonardo DiCaprio, Jamie Foxx and Jonah Hill celebrated New Year’s Eve after celebrating New Year’s Eve in Australia and then flying private to Vegas.)

At the new Lavo, a focus on tableside preparations.  Ashley Randall Photography

“It’s definitely not the party atmosphere the other Lavos have,” Scamardella says. “We’ve refined our service. We’ve eliminated the dreaded DJ booth. We’ve made it more serious about the restaurant experience and less about just having a party. And it’s great being in California where we have access to lots of local ingredients. One of the reasons the food is so good in Italy is that they’re using local ingredients.”

Scamardella, who is Tao Group’s chief culinary officer and is working alongside corporate chef Jason Hall to open the new Lavo, has tapped Bestia and Bavel alum Michael Priore as his executive chef in West Hollywood. The team will make crudo with Santa Barbara spot prawns; cook with local tomatoes and mushrooms; roast local long-stem artichokes; and make Caesar salads with local little gem lettuce. Scamardella is excited to use California olive oil and California mozzarella and burrata, although he realizes that he has to get certain ingredients, including ​Parmigiano Reggiano and prosciutto di San Daniele, from Italy.

When Scamardella talks about refining service, he’s referring to things like time-consuming preparations and tableside presentations. On a menu that also includes veal chop Parm, steaks, Dover sole piccata and langoustine scampi, he mentions two dishes that especially stand out to him. One is a whole salt-baked branzino that’s stuffed with thyme, fresh oregano and lemon.

“We’re gonna do that tableside, and we’re gonna explain it, and it’s gonna take a little bit of time,” he says. “It doesn’t really work in the other restaurants because of the type of service and the speed.”

The Silk Handkerchief is a pasta with white Bolognese.  Ashley Randall Photography

The other dish is local Pacific halibut al cartoccio.

“Cartoccio means in a carriage,” Scamardella says. “It’s steamed in the bag with local vegetables, a little lemon vinaigrette. The fish is really fresh. I look around in LA and see Chilean sea bass on menus. There’s so much fish around here. They’re going halfway around the world to buy a frozen fish. I don’t get it.”

The Lavo menu will also have numerous pastas, some of which will be finished tableside.

“I think at all different levels of restaurants, people like a little bit of a show,” Scamardella says. “We’re gonna do a silk handkerchief, which is a long piece of pasta, with a white Bolognese. We’ll grate the cheese on, and we’ll fold it at the table. You really have to teach the service staff how to execute these dishes. So we’ll start off slow and grow into all these different presentations as the staff gets better and better.”

Lavo is starting with dinner service, and Scamardella hopes to add lunch in the future. But while the other Lavos have been known for champagne-fueled party brunches, daytime dining will hit a little different at the West Hollywood location.

“It’ll be a relaxed, cool, fun atmosphere but definitely not dancing on the tables or ruining the furniture that we spent like $3 million on,” he says. “That is not gonna happen again.”

Without a DJ booth, Scamardella expects this Lavo to play music that’s “upbeat but not in your face.” Maybe, he says, there will be a mix of ’70s and ’80s rock and pop with some Europop mixed in.

“I kind of like Måneskin,” Scamardella says. “I have a 17-year-old daughter who listens to them, and I listen to some of their stuff, and it’s pretty cool”

“When we started this meatball like 15 years ago, one of the reasons we used Wagyu was because the off-cuts were relatively inexpensive,” Scamardella says. People wanted, you know, Wagyu ribeye, Wagyu sirloin, Wagyu filet. But all the off-cuts, which we call the primals, nobody really bought. Now, since we’ve had this explosion of using ground Wagyu for everything, the price has gone through the roof. But we still use those primals. It’s a much more salacious meat, right? Lots of fat, lots of intermuscle fat that make the meatball really luxurious.”