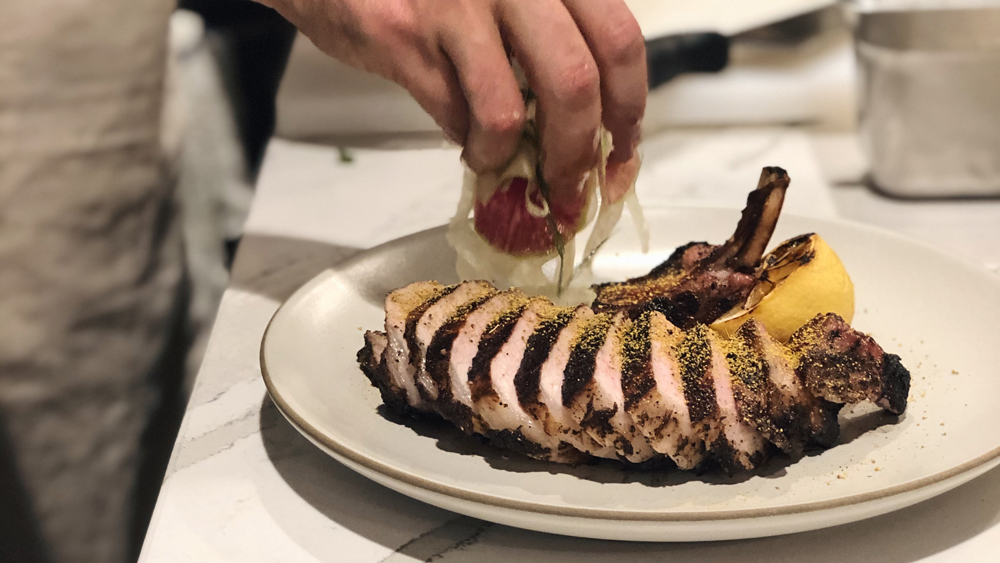 When Los Angeles chef Travis Strickland visited Phoenix this summer, he sat at a bar by himself and noticed something peculiar: Even though it was 115 degrees out, diners were still eating braised short ribs.

“You don’t see that in New York or L.A.,” said Strickland, the co-owner and executive chef of Brentwood’s Baltaire. He was looking to spinoff his restaurant into Arizona, but started to get concerned that his Middle Eastern-meets-Western Mediterranean steakhouse wouldn’t translate. “It told us it’s still very much a down the center, meat and potatoes crowd. So how do you introduce new things to them without being seen as too far out of left field?”

His new venture, Flint by Baltaire, opened in Phoenix last week and he seems to have figured at least one thing out: The most popular dish, which is unique to this location, is the hummus topped with spicy harissa, crispy shallots and pulled short rib.

“There’s certain things you can do that you know people are going to love, and that’s all well and good,” he said. “But one of the things that we have been hearing that really makes us happy is that we’ve brought something that hasn’t really existed there before, which was our goal from the outset. We’re introducing some new flavors and I’m highlighting some regions that haven’t necessarily been done on a larger scale there, while still keeping it approachable enough that it’s not going to come off as hardcore.”

In his white-tableclothed Los Angeles restaurant, Strickland can be bold with his regional influences, steak-heavy menu and fanciful dining experience. But at Flint, he chooses to scale it back, to give it its own identity. In fact, there isn’t much that’s the same between the two restaurants. At Flint, servers are dressed in aprons, not vests, and diners share plates of dips and spreads instead of caviar and towers of Maine lobster.

Dishes at Flint are recognizable, but still thought-provoking. Here, Strickland’s signature wood-fired cuisine has more of an emphasis on vegetables and fish. There is roasted beet tartare topped with tahini and dill; quinoa tabbouleh made with Persian cucumbers and fresh herbs; smoked bone marrow served with Medjool date jam and salsa verde; and wood-grilled lamb chops served with a Lebanese tomato salad.

“Outside of like a little small place in a strip mall somewhere off the beaten path, I don’t think [this style of food] has really been done on this kind of scale before,” he said. “We really invested heavily in the space itself to make it as warm and inviting as possible and give people an opportunity to be exposed to this kind of food.”

While he was initially concerned about not being welcomed into the dining community, he’s been pleasantly surprised. He’s even found that a lot of his diners overlap, as many Californians have begun relocating to the Phoenix area.

“A lot of big cities deal with [communities being fiercely protective of outside influence],” he said. “I experienced a lot of that in Chicago. You’d see chefs from other major markets come in and Chicago would turn their back on them and just go like, ‘you’re not local, we don’t want you here.’ People in Phoenix were even kind of like, ‘why did you guys come here?’ But we’re there because we want to be. It’s a tremendously evolving and growing market.”