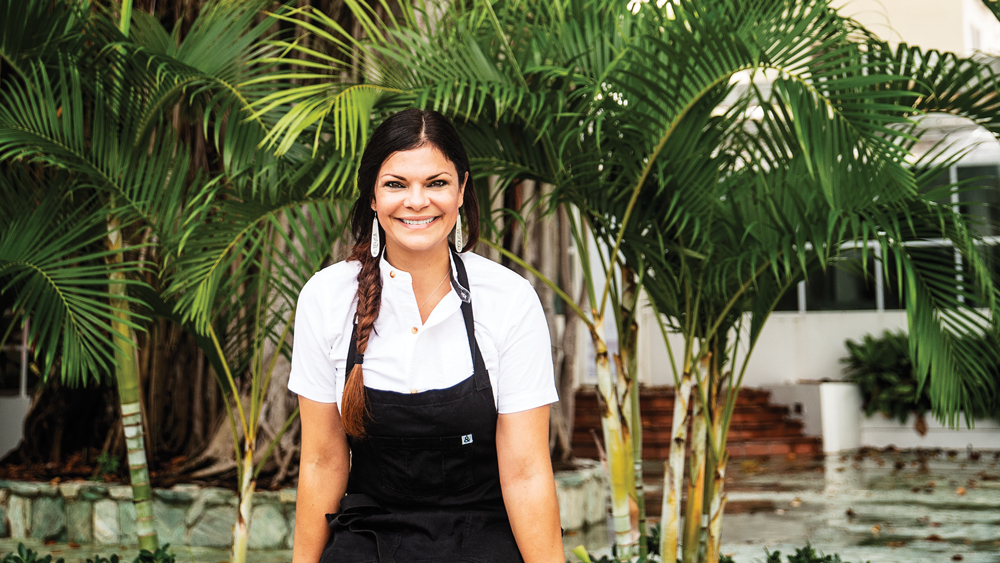 As Puerto Rico emerges from the shadows of tragedy, a small but mighty generation of expat chefs is returning to the island to give its long-lagging culinary scene a dash of new hope.

“This is my first time cooking Puerto Rican food in a restaurant,” Juliana Gonzalez (pictured above) confides. “It’s a whole new challenge to combine the food of my childhood with the techniques that I know today.”

Though Gonzalez, who hails from the southwestern beach town of Cabo Rojo, first discovered her passion for food through the dishes her mother and grandmother made, her tastes during adulthood pivoted often as she embraced one international cuisine after another, from French (which she learned at David Bouley’s Evolution) to Japanese (at Nobu and SushiSamba) to Spanish (which she serves at her critically hailed Miami tapas restaurant Barceloneta). The desire to cook her native cuisine on her native soil, however, always remained a hopeful ambition. “I always said that I wanted to go back to the island,” she says. “Because, really, what Puerto Rican doesn’t dream of going back?”

That dream materialized sooner than expected when the El San Juan Hotel approached Gonzalez last year to conceive a contemporary Puerto Rican restaurant from scratch. For the chef, the opportunity to lend her wide-ranging experience to the cuisine that first sparked her desire to cook was a no-brainer. She set to work, mining long-beloved family recipes—as well as her own memories—to revisit the flavors of her past. “I wanted to create a very Puerto Rican menu but with something different that the island hadn’t quite seen before,” she says.

Thus, Caña was born. Named for the sugarcane that has sustained much of Puerto Rico’s agricultural history, the colorful restaurant will open next month with an eclectic look that blends traditional handmade tiles, old family photos, and modern furnishings. Fusion will carry the menu, as well, with dishes like crudo served with fresh coconut, strawberries, and other fruits of the island; arroz con gandules prepared with a flair of Catalan flavor; and churrasco steak with Asian-inspired sides like bok choy and pickled onions.

For Gonzalez, a return to Puerto Rico also meant a chance to support her island at a crucial time of recovery. “I wanted to focus on the farmers first,” she says. “The farm-to-table movement is finally happening on the island, and we’re now able to get things fresh that we never could before,” she says, noting that everything from the flowers on the tables to the suckling pigs and guinea fowl come from local producers. “It’s so important right now to support the local markets and the local people and, most of all, to help my fellow Puerto Ricans.” 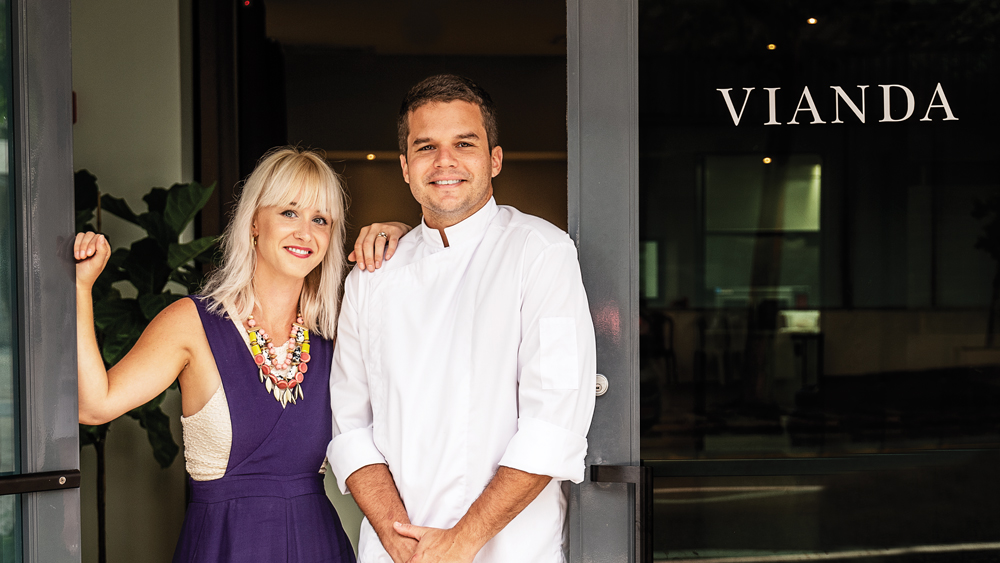 It took Francis Guzmán an entire year to master sourdough. “It was something I really wanted to make from scratch, pero [but] it was one of the few things I had never learned in other restaurants,” the chef and co-owner of San Juan’s Vianda restaurant recalls. “So I got some cookbooks, and started the trial and error, and kept going until I got it.”

It was a year well spent. The wild-yeast bread is the base for Vianda’s signature starter: a sourdough tostada topped with homemade ricotta, organic green and yellow zucchini, and pesto made from local basil. It’s a simple yet confident dish that proves the power of good ingredients. It’s also a soupçon of Guzmán’s cooking style: hyper-seasonal and unfussy, polished and refined.

To be sure, there’s an unmistakable streak of French classic technique in everything the chef creates, a nod not only to his training at the Culinary Institute of America but also to his three years as sous chef at New York’s the Modern. (Other highlights from his résumé include Dan Barber’s Blue Hill and Jardinière in San Francisco.) Yet Vianda is clearly rooted in Puerto Rico, incorporating the flavors from Guzmán’s upbringing—as with his mariscada, which rethinks the island staple of mashed plantains known as mofongo by mixing it with shrimp and mussels and serving it beneath grilled salmon—and manipulating his menu weekly to use only the freshest local ingredients available.

But Vianda, which Guzmán opened with his wife (pictured above), Amelia Dill, in March, isn’t just an act of nostalgia—it’s a play for culinary progress. “San Francisco and New York made us love restaurants, pero when we came back to Puerto Rico, we were frustrated,” he says. “The service was subpar, and the food was just whatever. We saw a great opportunity to come and really do something here.” And do something they did, converting a once-empty storefront in the Santurce neighborhood into a sleek dining space and hiring an impassioned team that includes other returning island natives like Gina Micheli, the restaurant’s effervescent sommelier. Still, it is Guzmán’s careful and elevated dishes—from his sourdough tostadas to his spicy tom kha bacalao to his tagliatelle stuffed with braised rabbit and turmeric— that represent the future of Puerto Rico’s dining scene. And that future, however long it takes to happen, is certainly bright. 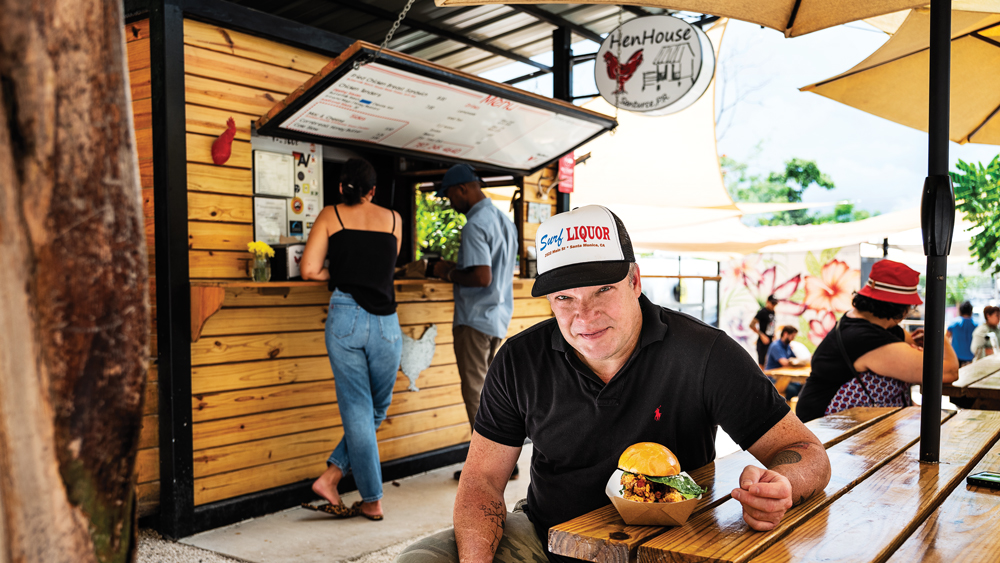 Pierre-Philippe Saussy had seen and done it all: worked in France and Belgium, New York and Los Angeles. Trained under legends like David Bouley and Roger Vergé. Even risen to the head of some of the world’s most famous kitchens. But last year, he suddenly realized he was done. “I’d been in fine dining my whole life, and I always thought that was what my career would always be,” Saussy recalls. “But after 20 years, I realized I wanted to try something different. So I went into the fried-chicken business.”

The move from foie gras and filet mignon to fried birds and brioche buns may seem like a fall, but for Saussy, born in Puerto Rico, it was a leap toward something far more gratifying than a Michelin star: happiness. “Every few years,” he says, “I’d move back for a year or six months and then move on to another city. I finally decided that I just wanted to stay for good.”

He returned home two years ago and immediately connected with a local hotel to create a high-profile restaurant. But the project stalled and an entirely different allure took hold: In the Santurce district, an abandoned lot was being converted into Lote 23, an assemblage of sleek wood-paneled food stalls run by some of the island’s most promising young talents. In the midst of an economic crisis, brick- and-mortar restaurants were failing left and right; this was the next big thing. In March 2017, Saussy opened Hen House, with a small menu featuring just one entrée—a fried-chicken sandwich—and a handful of sides.

“It’s really difficult to take two ingredients and make them taste amazing,” Saussy says. “Every element of this sandwich has technique behind it.” In fact, the idea started not with chicken breasts or buns, but with cucumbers from a local farm. On a whim, Saussy made a killer dill pickle and then visited another local farm to source the perfect lettuce to go with it. Until Hurricane Maria, all of his chickens—which he fries in a homemade buttermilk batter that adds just the right amount of salt and kick—came from Puerto Rican poultry barns. “The ones we’re getting from the U.S. right now just can’t compare,” he says, “but we’re starting to see the local birds come back.”

Also coming back is the brick-and-mortar restaurant: Saussy has plans to open a permanent location of his acclaimed chicken shack in San Juan’s Condado neighborhood early next year. It will feature a broader menu with even more deceptively simple dishes. And, he says, it will be yet another sign of Puerto Rico’s bigger comeback. “People are starting to see that there is definitely a future here. It’s hard to explain, but there’s something going on here. And it’s something good.” 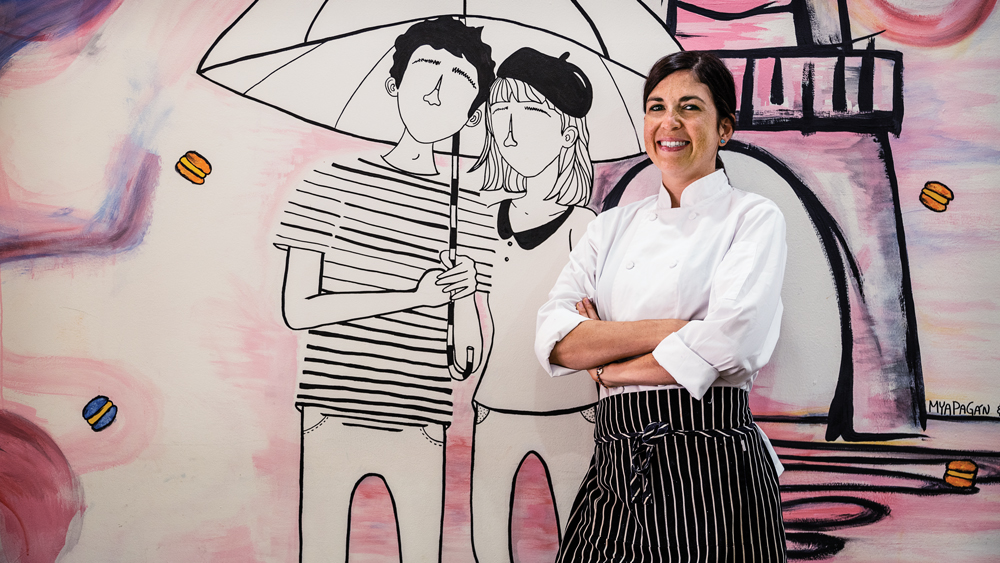 Lucía Merino’s canelés are delicate, precise, and, like everything at her humble patisserie, hard to come by. “We only have 16 molds, and they don’t always come out exactly right,” Merino says of the custard-filled pastries, which she makes with organic milk, eggs, butter, and dark rum sourced from local farms. “They are never officially on the menu, but we always keep them as part of a secret menu.”

Secrets are hard to keep on an island as small as Puerto Rico, but at Lucía Pâtisserie, an air of mystery prevails. That’s because Merino opens her San Juan bakery for just a few hours every Saturday—from 8 a.m. to 12:30 p.m.—and each week the menu is completely different. Frangipane tarts, sweet-and- salty galettes, and hazelnut praline profiteroles are here today, gone tomorrow, replaced by another collection of sweet French classics that fly off the baking sheets the following week. Most Saturdays the shop sells out by noon. Then it’s back to a busy week for Merino and her two pastry chefs, sourcing ingredients from all over the island and brainstorming another menu of carefully crafted desserts.

Merino’s obsessive dedication is no doubt a product of her training. The Puerto Rican native studied for three years under Frederic Monnet (one of just a few dozen master pastry chefs in the world) and traveled to Madrid and Barcelona to expand her craft. But after more than a decade abroad and a stint under yet another pastry legend— Miami’s Antonio Bachour—she felt the itch to return home and start something of her own. In Puerto Rico, she saw an opportunity to turn the sweets scene upside down.

“Everybody here was doing traditional Puerto Rican stuff— pastelitos, rum cakes—and I wanted to bring something different to the island,” Merino says. “I had my doubts because the economy was not the best and everyone told me not to come back, but something was calling me.”

Two years later, after a successful Kickstarter campaign and a few delays (including a three-month setback due to Hurricane Maria), Lucía Pâtisserie opened last December. The long lines of sweet-toothed patrons that snake out the petite bakery’s front door every weekend soon followed. But the draw, Merino says, isn’t just in the intricate execution of each beautiful confection—it’s in the distinctly local story each one tells: Her famous tarts are filled with fresh passion fruit sourced from island growers, and her flaky croissants owe their richness to the butter produced by one of Puerto Rico’s oldest dairy farmers. And on some Saturdays, Merino even offers a new take on that age-old classic, the hand pie, with fresh cheese from Caguas and guava jam from Guaynabo.