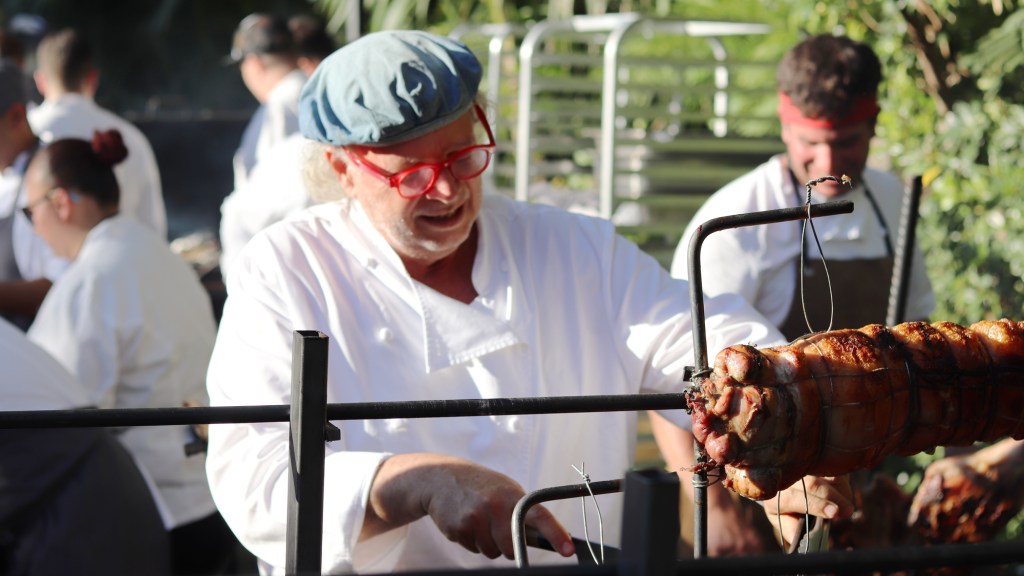 Just a few feet from the chair Francis Mallmann sank into, large billows of smoke wafted around spits covered in porchetta that turned slowly above a makeshift fire pit. This wasn’t on an island in Patagonia; this was in Los Angeles, where he was burning a hole in the manicured lawns of the Bel Air Hotel. He’d come here to cook along fellow culinary greats, including Wolfgang Puck, Nancy Silverton, Dave Pynt of Burnt Ends in Singapore, and Eric Werner of Hartwood in Tulum. This moment served as but a brief repose for the Argentinian chef, whose notoriety leads him all over the world.

“I take five to six planes per week on average,” he says. “I’m going to France on Saturday, where I have a restaurant in the South of France. Then I’m doing two private events in New York, back home to Argentina for a week, then going back to New York for another event, and from there I’m going to my island to rest.”

He’s been in especially high demand the last 2 years since he appeared on Netflix’s Chef’s Table, which chronicled how he’d abandoned the strictures of European cooking that had brought him great success. “I did a big change in my cooking 20 years ago,” Mallmann says. “It was a radical change. I went from sort of French manicured cooking to cooking with fires.”

Now, not a day goes by where people aren’t approaching him to ask if they can break out of their rut and go work for him. He sat down with me to discuss what the last 2 years have been like and to reveal his next challenge of writing a movie.

Did appearing on that episode of Chef’s Table change your life?
Yes. I don’t know how many millions of people saw that, but it has changed. We get hundreds of messages every day in social media, letters, people who say, “I want to go and work, I want to go and learn, I want to change my life.” So, yes, there’s been a big change.

What do you think people connected to in that story?
The worst enemies we have in life are routine and fear because they’re two things that paralyze us. It seems as if people have trouble running away from that. I’ve been doing TV for 32 years, and I realize that it’s not the cooking—it’s the thoughts that people are attracted to. The possibility that they say, “Well, maybe I can change my life. Maybe I can turn around and do something else. Maybe I can drop my job. Maybe I can go out and cook in a park or in a mountain.” The show had a call to it that was very, very strong. It was a confession of my life, that film. It’s the most important thing I did in my career.

Did you sense it changed people’s perception of you alone, or did it change you as well?
No, it didn’t change me, but I was sort of naked there. I took off my clothes, and I think people appreciated that.

Would you call yourself a romantic?
Yeah. I live romantically. People think that romance is mainly a relationship between people, but romance is everything. It’s how you wake up, how you read a book, how you sit, how you choose to live every hour of your day, and I try my best to live romantically, yeah.

Was that romanticism at the core of why you drastically changed the way you cooked years ago?
All of my childhood, this is the way you lived—outside, cooking with fires. When I was 10, 11, I used to be sort of like a servant of the fly fishermen in the lakes, and I would help them take off their boots and cook them lunch. This is a bit how we lived. It’s just that then I went into French cooking, and I became sort of a very much a chef, and then one day I just said, “I don’t have my own language, and I have to find out what should I do.”

And I thought, I have to go back to my childhood because it was such a beautiful feeling inside of me, my childhood. We were raised in the mountains. We spent more than half of the day outside with dogs and used to walk for days in the mountains, and we lived in a very remote and wild place and very beautiful. I just sort of embraced all of that again and created this lifestyle of fires, and I’m very in love with it.

I didn’t invent much in my cooking life. I’ve just been embracing cooking techniques from the Andes, from the natives of South America, the gauchos, and there’s a strong influence of my French work in the ’80s and late ’70s, but I just sort of embrace beautiful things that I like.

You still have a lot of people who didn’t grow up as you did, but they still want to go live in Patagonia and cook with you. Why do you think that is?
I see it a lot. I was in a cooking class like a year ago in Miami. I was giving a cooking class, and there was this young man who came up to me and said, “I’m an investment banker in New York, and I want to change my life into cooking, and I want to work with you.” And I said, “Maybe you can start studying or cooking somewhere in New York, and when you learn a bit, you can contact me.” And then he said, “No, I would like to do it now.”

I said, “You have no experience; it’s very difficult.” At the time, I was doing an interview with a journalist, and he came, walked in, grabbed a chair, sat with me, and he said, “You don’t understand. I really want to work with you. I’m being very rude. I was sort of the trader in New York that last year did most money. I did $28,000,000 in my salary, and I dropped it, and this is what I want to do. Please help me.”

When did they lose it?
It started going away in the ’50s, ’60s. Got really bad in the last 15, 20 years. Really bad. But corporations will have to change, and that makes me very happy.

I’m not a communist. I love money. But it will have to change.

The people coming to you weren’t waiting around for that change.
Some of the people who come on board, maybe they stay for us for some years and then they move on to something different. I always have a feeling that they like the dream.

What dreams do you have right now?
I’m always dreaming, really. I’m a big dreamer. What I most like doing nowadays is writing. I write a weekly column in the newspaper at home. I enjoy that very, very much. I wanted to write a film, so I’m working on a script for that.

What kind of film is that?
It’s a drama.

What compelled you to want to write it?
It started as an essay, but it’s a story that is written in a place where I know every stream, every tree, every cloud, every rock, so it’s adjusted to this scenario that I know by heart. That’s very important. Then there is this sort of drama, romance, of temptation, of desire, of unfaithfulness—all the common human things.

Is the place almost a character in and of itself?
Yeah, the place is very important in the film because it’s very related to the season, to summer, to huge snowstorms, to the life of the Andes or mountains. I would say one of the main characters of the film is that place.

How much of it do you have done currently?
When I have time, I’m writing.