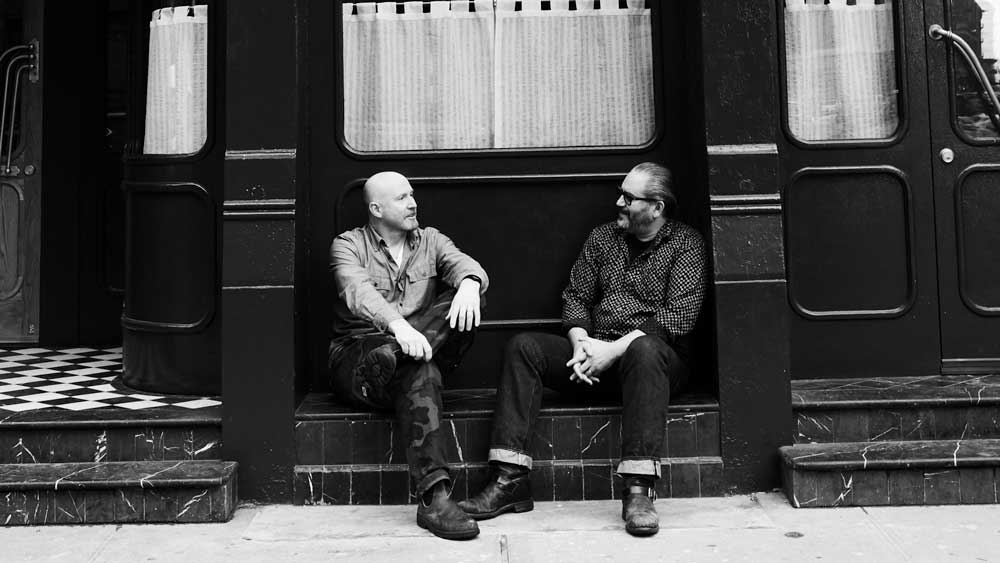 In the popular imagination, there’s the notion of the chef as the singular driving creative force behind restaurants. There’s Gordon Ramsay yelling at the brigade or Rene Redzepi as the genius at the helm. Yet, great restaurants are a team effort, and one of the best to open in the last year has not one head chef, but two. The duo behind New York hot spot Frenchette aren’t brash young chefs bursting on the scene, but a pair of seasoned industry vets striking out on their own.

Riad Nasr and Lee Hanson are no strangers to hit New York restaurants. Before opening their neo-bistro in Tribeca last April, they worked for Daniel Boulud at his flagship fine-dining restaurant, and for more than 15 years they were the culinary force behind Keith McNally’s downtown dominance. They ran beloved spots, including Balthazar, Schiller’s, and Minetta Tavern. After parting with McNally in 2013, they sought to finally open their own restaurant. Frenchette has all the expected touches of a brasserie, but the chefs are pushing themselves to subtly subvert the classics. They’ve managed to create food and a space that feel both familiar and fresh.

We sat down with Nasr and Hanson to discuss how their collaboration developed, the evolution of their cuisine, and how diners becoming more adventurous has allowed the duo to push boundaries in the kitchen.

Why did you open Frenchette?
Hanson: We don’t know anything else. We have no choice. [Laughs]

Nasr: That’s literally the truth, right? We don’t know anything else. Literally. We’ve been in kitchens for a long time—30-plus years.

I’m older than that.
Nasr: Well, you have a youthful appearance.

I appreciate that. What was the connection early on that started you two wanting to work together?
Nasr: It really was friendship.

Hanson: At first it was hockey. When we were both at Daniel, his team was in the playoffs, playing West Coast games that started at 10 o’clock, so we were able to catch the last two periods after work at a bar. That’s how it started. And we just got along. We’re both kinda dicks and like the same things and like to kid each other.

Nasr: We bonded and became close friends outside of work and it made working together easy because we complement each other.

Hanson: The odd thing that happens in kitchens, especially ones like Daniel that are a stressful environment, you look to each other for support, and we saw stuff eye-to-eye.

Hanson: When you’re writing menus, trying to pull stuff together, we divide and conquer and do different things because that’s what the structure of the day dictates. And then I find the best dishes were the ones where we worked together—where we both had input. That’s something I like about our relationship.

Nasr: It’s just complementary. There’s not going to be any ego when we’re working on things. There’s pride, but that’s not about ownership, it’s about doing something together.

How did your styles develop that you’re not big into the fussiness of food?
Nasr: I think you should fuss over quality, or fuss over certain details, but I don’t really fuss too much over—

Hanson: —the placement of a flower petal on the plate.

Nasr: Yeah. Fussing over that can be easy to do. Take microgreens, for example. Remember when they were big? You don’t see a lot of them in our food here. They’re pretty, and that’s a way of making a dish pop, but I’m not sure it’s adding anything other than that. There are better things to make a dish pop.

Hanson: We tend to strip away that stuff. The simplicity of a plate is just two, three, or maybe four, at the most, ingredients in harmony. It should look nice, obviously, but sometimes dishes get composed these days for how they look on a plate, but not how they go together.

Nasr: There’s a heartiness to the food, a comfort to the food. That’s our focus.

What was your ambition when opening the restaurant?
Nasr: We wanted to separate ourselves a little bit from what we’d done in the past. We wanted to feel like there’s a familiarity to the food, but it wasn’t necessarily the same thing you ate at similar restaurants we’d been involved with prior. It’s not just the same thing.

In what ways?
Nasr: We didn’t want to take a literal brasserie from before and do it here with an onion soup, and even though there’s a steak frites, we actually do it with duck instead of steak. Things that give you a sort of foundational familiarity, but at the same time we wanted to distinguish and separate ourselves. And we wanted to challenge ourselves.

Hanson: But we didn’t envision how this looks when we started out. This all happened very dramatically over time.

Nasr: It probably made it a costlier experience, but as we were building the space and adding details, the menu side started to take shape too.

How did the design of the place work into what you were doing?
Nasr: Some friends of ours in Brooklyn, they call themselves Springs Collective, worked on that. We had a humble budget and humble vision originally for the kind of restaurant we wanted to do. Simple space, simple food. They challenged us to break out of our mold. And we challenged them to break out of the whole Brooklyn restaurant vibe. Our early conversations got us out of our comfort zone.

Hanson: It’s almost an extension of how we like food, from plating to cooking. The design elements of the dining room are all high quality and they’re pretty, but not overdone. It’s not crowded with elements. It feels familiar but it’s still fresh.

The restaurant was designed by the Springs Collective.  Photo: courtesy Melanie Dunea

A dish that really stood out to me, and embodies what you’re talking about, is the brouillade—the soft scrambled eggs and escargot. It feels so classic, but it really isn’t. What was the provenance of that dish?
Nasr: We talked about how on classic menus they’d have egg sections, so it was an early inclination to feature eggs in some way. We had the idea to do a soft scramble and we had the idea to do an escargot dish. At one of our preliminary menu meetings, we overheard one of the managers whispering to another that they wanted to dump the snails on the eggs. We both kind of stopped for a second, looked at it and said, “that’s great—we’re going to do that.”

You were going to save them the step.
Hanson: We’ll take that step away and combine the two. It just made sense.

Nasr: You’ve got to find inspiration in the right places and you should acknowledge it as well. You know, some things are accidents. It happens a lot more than people are really willing to admit.

So there wasn’t anything in the French culinary canon you pulled that from?
Nasr: Not necessarily those two dishes together. But you have two elemental French preparations. You have the escargot with garlic and parsley, then you have soft scrambled eggs. It makes sense that their paths cross.

There’s not an obsession with authenticity at Frenchette.
Nasr: We’re trying to have a little fun with French food, to see something through a slightly different lens. But also, we’re pretty staunch about certain things. We had a dish on the menu that’s a very classic dish. There’s layers and layers and layers of flavors with no touching. There’s so much technique involved in just re-creating and mastering that dish, that it is what it is. There’s no need to be idiosyncratic around it. And I don’t think we try to be intentionally idiosyncratic.

Hanson: Well, once in a while. We have this Comté madeleine. Instead of a sweet madeleine, we do a savory one with Comté cheese. It’s basically a cheese puff. We put prosciutto over it and black truffles. So that’s not something we’ve ever done before, but it’s not a stretch to get there. It’s a play on something.

Is that from cooking French food for so long that you know the cuisine at its core, so you know where to play and where not?
Nasr: Certain things marry really well together and it’s hard to escape them. We’re old. We’ve seen a lot of stuff. So, yeah, there’s that intuition you get through experience. We also have to be in the kitchen. A lot of this menu is not conceptualized outside the kitchen. The menu wrote itself very much in those two weeks before we opened. There’s spontaneity in that.

How are you deciding what to add to the menu?
Nasr: The driver is the ingredients. You look at the purveyor who’s coming through and see what’s available. Oh, here comes John Dory, let’s get that. Can we use the same garnish as the sea bass? No, well then let’s find something else in season. So that’s the driver. Then we think of what we’ve done in the past and marrying it with something we’ve never done. Or maybe something we saw in a classic cookbook and we think, how can we bring it back to life?

Hanson: We put sweetbreads on the menu. They sold really, really well. We’re not tired of sweetbreads, but we wanted to try something else. Liver was well received, so let’s try kidneys. First day, 12 kidneys out the door, so we pushed people with kidneys. We got brain in recently and, it’s not for everyone, but it’s eight to 10 a night. There was a point where we had three offal on the menu. We’re not an offal restaurant, but it’s almost seeing how far we can go. Then you see a ticket come in and it’s got tripe, brain, kidneys, and liver on it and you go, God, that’s great. There’s a curiosity out there.

Nasr: Because of people like Anthony Bourdain and Matty Matheson and the Joe Beef guys, people have been exposed to trying food they haven’t seen. There is a competitive element to eating things like that. But again, people are looking for an experience, and there it is in front of them, the experience of trying something they haven’t had.