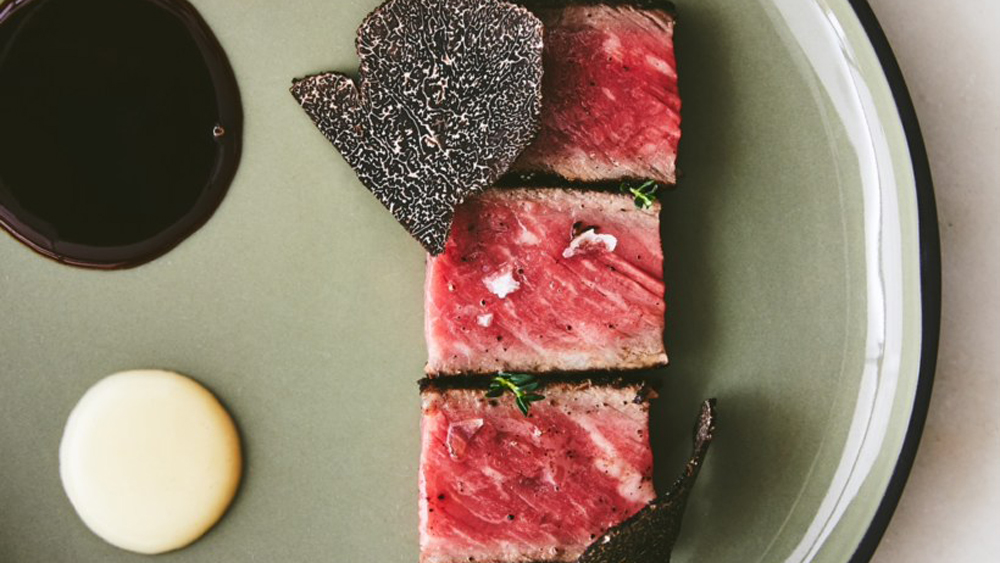 At a time when some of the country’s most renowned fine-dining restaurants are on hiatus (Benu and Eleven Madison Park), just peeking out from hibernation (Le Bernardin), and continuing to lean into casual pivots (Canlis and Quince), Chad Williams reopened Philadelphia’s Friday Saturday Sunday with an eight-course tasting menu.

Williams and his wife Hanna took over the ‘70s-era Rittenhouse Square restaurant in 2017. They gutted and redesigned the interior (buh-bye, 135-gallon fish tank; hello, marble-topped bar and Tuileries-inspired wall coverings) and began the gradual work of building a community of regulars. “We were very much a higher-end neighborhood restaurant and offered all the items you’d expect: oysters, roast chicken, New York strip, salads, pretty traditional fare,” says Williams. “Entrées were proteins with veg, sauce and starch. We had to create within that framework.”

Williams’s tasting menu turning point came in January, when city officials reopened indoor dining at 50 percent capacity for most restaurants. Because of Friday Saturday Sunday’s size and set-up, its dining room maxed out at 25 percent, or 20 seats. “The old menu didn’t make sense financially. We would be losing money to stay open,” says Williams. “So we decided to give it a go with the larger format tasting menu. It became an opportunity rather than an obstacle.”

While a $130 tasting menu might not seem like the logical next step after selling juicy, Cardi B-inspired Wappers, fine dining is in Williams’s culinary DNA. After graduating from Howard University and staging at Guy Savoy and Mugaritz, he worked in Jose Garces’s Philadelphia restaurants for eight years, followed by stints at restaurants including Eleven Madison Park, Manresa and Saison.

He had accumulated lots of ideas and techniques, especially around vegetable-focused cuisine, and finally there was no risk in unleashing them. “We always had ideas that never could fit into the old style menu,” says Williams. “The stuff that’s been in my head for my entire career can now make it onto the plate.”

In his current menu, guests start with oxtail tea infused with annato-spiced beef fat and topped with osetra caviar. Next comes a jewel-box presentation of cured hiramasa; pasta stuffed with the bright and earthy combination of beet and hibiscus; and sweetbreads coupled with mushrooms, plantains, and poached egg. There’s buttermilk dashi sidled up to striped bass, and a duck pie with collard greens.

New York strip survived the change in menu format, but now Williams glazes three slices of dry-aged beef in bone marrow butter that has been whipped with thyme and black pepper. A circle of Comté cream sits to the left of the marbled slabs and below a concentrated onion jus for which Williams’s team caramelizes 50 pounds of onions, steeps them overnight and reduces the resulting liquid to three cups. “Guests say it tastes like A1, but it’s just two ingredients: onions and water. We’re proud of that one,” he says.

As an added benefit, and at a time when more and more chefs are slinging pizzas and sandwiches, Williams’s cooks are contributing their own experiences and dishes to the menu. “As a cook, this is what you want to do: work on ideas and put them out there for other people to try. We’re able to be lighter on our feet, which means that all the fun things we would experiment with and taste in house—dishes we’d never cook for the majority of folks—we can now serve.”

Restaurants can’t be all things for all diners, but last year’s forced experimentation has shown many chefs that their kitchens can do more—while potentially benefiting the business, workers and guests. For some restaurants, that might mean installing a ghost kitchen, adding subscription services, or maintaining retail markets into the future.

As soon as he can, Williams will restore Friday Saturday Sunday’s á la carte and pre-fixe menus. He’ll bring back the restaurant’s lively bar dining (Paul MacDonald’s cocktail program is reason enough to visit), and he will integrate the tasting menu into dinner service, giving diners another reason to visit on special occasions.

“I never thought we’d be able to put together a menu like this,” says Williams. “When you have a popular restaurant, you want to maintain your customer base, and often innovation takes a back seat to consistency. The pandemic allowed us to shake it up a bit and to move forward.”