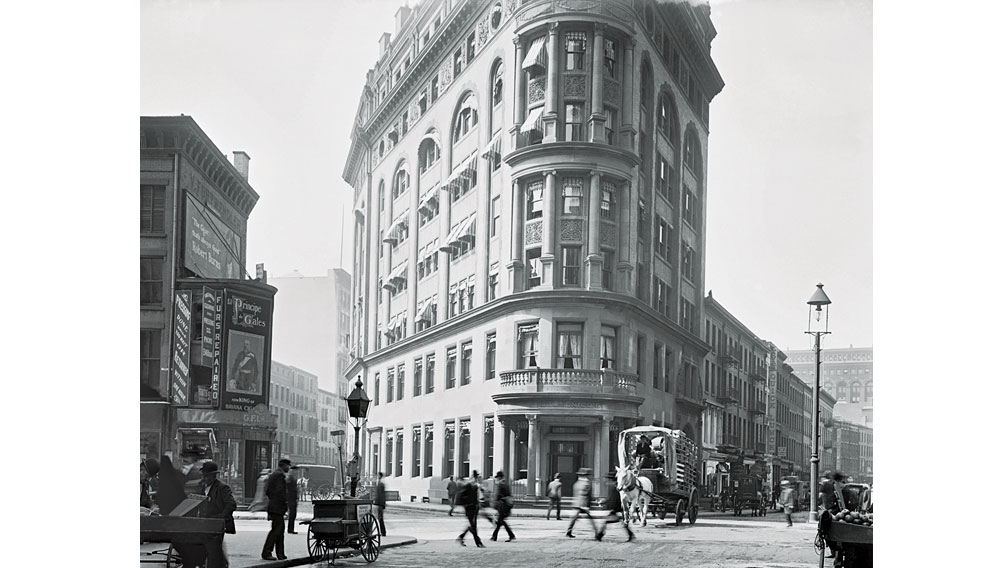 Dinner in the impeccably sober brownstones of Old New York, as the author Edith Wharton termed it, was a solemn affair. For these prosperous and proud Dutch and Anglo-Saxon families, the dinner party was a staple of their immutable and stately social routine. These gatherings of Knickerbockers commenced at five or six o’clock in the afternoon, and the fare was ample and unpretentious. Wharton recalled her parents’ table being laden with such delicacies as Virginia ham cooked in Champagne, soft-shell crab, and terrapin. Service then was typically à la Française: All the dishes, in other words, were displayed as the guests took their places. By the 1870s, however, the nouveau riche gained a foothold in Gotham, and their flamboyant practices soon crowded out the quaint customs of the Knickerbockers.

The robber barons and merchant princes of this newly moneyed class dined at the barbarous hour of eight or nine, and at their tables, service à la russe—in which staff presented each course individually—was the fashion. French cuisine dominated the 12 to 14 courses, which were served by a well-drilled army of liveried footmen under the command of a butler in white tie and tails.

Even worse than these conspicuous domestic displays was the fact that, on occasion, these parvenus dined out—in public. This particular bad habit was usually acquired and indulged at the intersection of 44th Street and Fifth Avenue, where two formidable buildings on opposite corners housed the city’s most exclusive restaurants, Delmonico’s and Sherry’s.

At the turn of the 20th century, the concept of a restaurant, or public dining room, was still relatively new to America. Back in 1830, when Swiss immigrant brothers John and Peter Delmonico first opened their French restaurant at 25 William Street, the only public dining establishments were inns or taverns, which offered tables d’hôte to businessmen or travelers. The Delmonico brothers introduced New York’s first à la carte menu, which featured exotic items, such as artichokes, and sophisticated French sauces. Their success enabled them to construct a new, more impressive edifice at 2 South William Street (pictured), whose portico incorporated classical columns reportedly from the ruins of Pompeii. Over the decades, members of each generation of the family stepped in to manage the expanding business, and Delmonico’s soon boasted multiple locations, the 44th Street site being the most exclusive. Opened in 1897, this uptown pleasure palace featured a plush bar, a palm court with an orchestra, richly appointed dining rooms, and a third-floor ballroom.

Acceptance of restaurants within the highest social strata, however, was in part the achievement of the upstart eatery across Fifth Avenue. Designed by architect Stanford White, Sherry’s opened at this address in 1898, and its proprietor, Louis Sherry—an entrepreneur from Vermont who had worked his way up through the hotel business—bested his more pedigreed competitor by adding three ballrooms to his master plan. This extravagance was sufficiently alluring to enable social gadfly Harry Lehr to convince his patroness, the unapproachable Mrs. William Backhouse Astor Jr., to accompany him there one Sunday evening. The sight of the redoubtable dowager, clad in white, stepping across the threshold caused a sensation in the press. “I never dreamed,” wrote one reporter, “[that] it should be given to me to gaze upon the face of an Astor in a public dining room.”

Just as Astor’s invitation to tea granted tacit entrée into the uppermost echelons of Fifth Avenue, her condescension to enter Sherry’s signaled to her followers that dining out was now in. Thanks to this benediction, the rival restaurants flourished, providing stages suitable to such decadent diversions as Cornelius G. K. Billings’s 1903 Equestrian Club dinner, at which the guests’ horses, shod with rubber horseshoes, cavorted through one of Sherry’s ballrooms, their saddlebags filled with iced bottles of Champagne. Pro­hibition, however, eventually put an end to these revelries. Both the Delmonico family and Sherry realized that the impending ban on wine and spirits would compel their most prodigal patrons to once again dine in: At their own residences, hosts could partake with their guests in private. By 1919, the Delmonico family had sold the last of its locations, and that same year, Sherry—frustrated not only by the dry law but also by the growing labor movement—closed his doors. “I am at the point,” he told The New York Times, “where I cannot increase my staff of waiters without admitting Bolsheviki, but I will not submit my patrons to have their food thrown at them.”