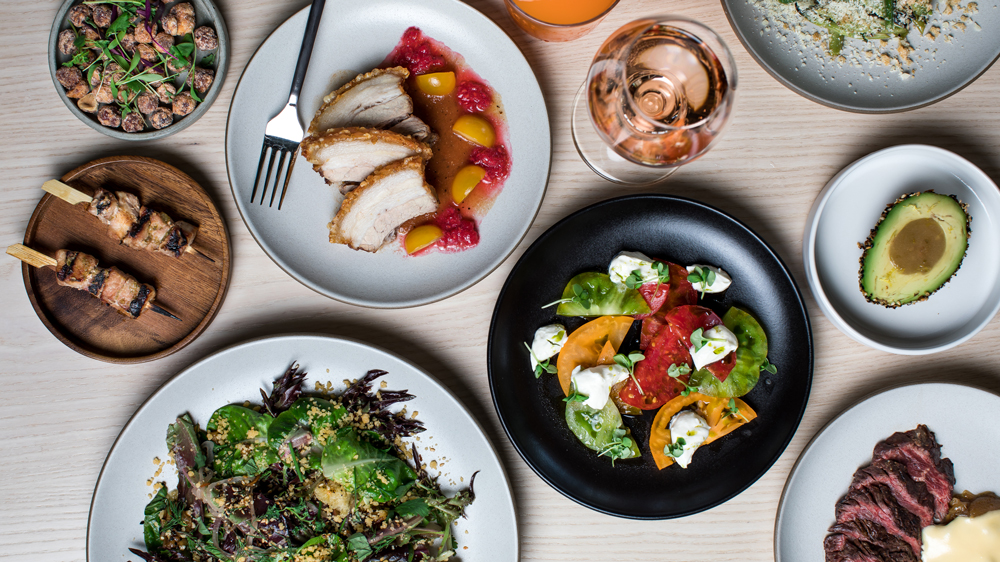 If you’re someone who goes to a picnic and fills your plate with so many sides there isn’t room on there for a hamburger, a new Portland, Oregon, restaurant is for you.

G-Love, which opened last night in Portland’s Slabtown neighborhood, turns the idea of “mains” and “sides” on its head. Here, the traditional main dishes—meats—are served on the side, and the veggie-heavy sides are given center menu column placement.

“I call it a reverse steakhouse,” chef-owner Garrett Benedict says. “We are a vegetable-focused restaurant. All of our proteins are in 4-ounce or smaller portions and they’re basically just served à la carte.”

To Benedict, flipping the menu like this helps position G-Love as a plant-forward, health-conscious restaurant without having to go totally meat-free. He didn’t want to turn away any hell-bent carnivores.

“I used to work at a vegetarian restaurant in California called Ubuntu and it was a really eye-opening experience for me,” he said. “But I could never really stomach the idea of never cooking meat or fish again. And I didn’t want to close off the opportunities to bring in a diverse clientele base.”

G-Love (the chef-owner’s childhood nickname) is his first solo restaurant, but he has cooked in prestigious kitchens across the country including California’s Michelin three-starred The Restaurant at Meadowood, Ubuntu—the first vegetarian restaurant in the world to be awarded a Michelin star—Michelin-starred Al’s Place and Philadelphia’s James Beard Award-winning Osteria.

“I’ve been cooking for 18 years and I’ve always found that restaurants that have a unique position within their market tend to stand out more,” he said. “We built a really dynamic menu that has a lot of flexibility.”

G-Love’s advantage is not only its concept, but the vegetables themselves. The restaurant has a partnership with Olde Moon Farm in the Willamette Valley, which supplies the 50-seat restaurant with unique, hard-to-source produce daily.

“I picked out 60 to 70 custom, heirloom varieties of vegetables, which they’re growing specifically for us,” he said. “Having the partnership is really kind of crucial to the flavors that we’re able to achieve with the vegetable dishes.”

One G-Love-specific variety of tomatoes, called Dark Galaxy, is ombré colored, starting with black on one end and fading to red at the other. Benedict says it’s beautiful and delicious and he’s only seen it once before, at a farmer’s market in California half a decade ago.

Right now he is using them in a tomato crudo dish, which is a riff on a classic steakhouse caprese salad. The tomatoes are sliced raw, drizzled with olive oil, sprinkled with black pepper and salt and served with house-made ricotta that’s seasoned with a bit of lemon juice and basil oil.

There are also savory candied hazelnuts, a Tuscan bean stew made with braised greens and toasted garlic, hot avocado toast topped with grilled summer squash, seared Alaskan salmon with plum relish (a side), charred hanger steak with caramelized onions and horseradish (a side) and desserts like salted butter semi-freddo.

One salad, the Ensalada Bomba, incorporates five varieties of lettuces and five types of herbs. It’s topped with avocado, toasted seeds, aged Gouda, grilled peach relish and poached plums. The vinaigrette is made with oil infused with stone fruit pits. (Forget what you may have heard about pits being poisonous; that’s only in very high doses.) Benedict says it tastes like toasted almond Frangipane and smells like you just walked into a pastry shop.

“We’re really all about layering and concentrating bright and fresh flavors,” he says. “The main goal is that everyone who comes in can find something that they’re going to just absolutely be floored by and love. They’re all going to leave happy.”