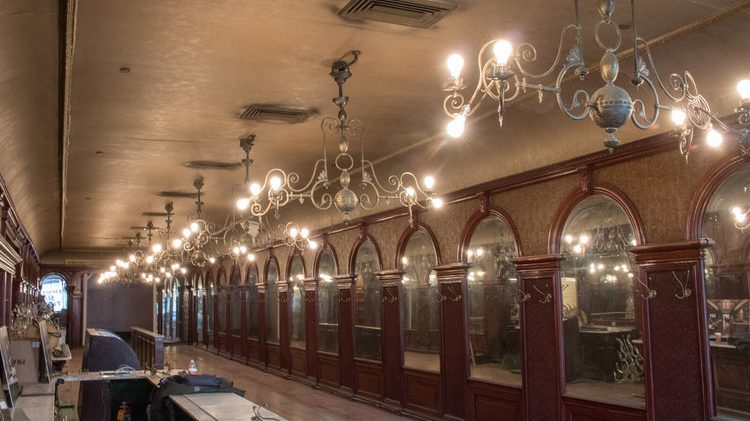 The TGI Fridays on 372 Fulton Street in Downtown Brooklyn had to have been the most beautiful one to ever exist. That’s not to say the chain restaurant deserves any credit. The purveyor of loaded potato skins didn’t create the décor in the landmark building it occupied from 2004-07; it merely visited indignity upon the grand space that one of New York’s most legendary restaurants occupied for more than a century.

Since Friday has closed, the former home of chophouse Gage & Tollner also housed an Arby’s and a discount jewelry store that covered the walls of beautiful mirrors with pink particle board and cheap trinkets. Certainly a more ignominious end than the old Four Seasons faced in Midtown, which saw the Major Food Group team quickly revive the space to create The Grill and The Pool. Last decade, there was no one around to save Gage & Tollner.

Fortunately that jewelry store has cleared out and a trio of restaurant industry veterans wants to revive Gage & Tollner to return it to its old glory, according to the New York Times.

The husband-wife team behind Brooklyn’s The Good Fork and Insa—Ben Schneider and chef Sohui Kim—are partnering with St. John Frizell, owner of the bar Fort Defiance to attempt the rehab. The trio are using the site Wefunder to raise $600,000, which they estimate is one-third of what they’ll need to turn the space into a functioning restaurant again. Unlike other crowdfunding sites, this one will pay back the investors with interest if and when the restaurant starts turning a profit.

Gage & Tollner, which opened in 1879, has been granted landmark status for both the exterior and interior of the building—the first restaurant in the city to have its inside earn that designation. The potential operators plan to restore the ground floor level for the restaurant, then build a new bar on the second floor where private dining rooms used to be.

As for the direction of the menu, Kim hews toward tradition from the kitchen. “People still love iconic chophouse favorites like Caesar salad, creamed spinach, or a perfectly cooked ribeye,” she writes on the restaurant’s website. “My goal is to elevate these classics without reinventing them or making them gimmicky.”