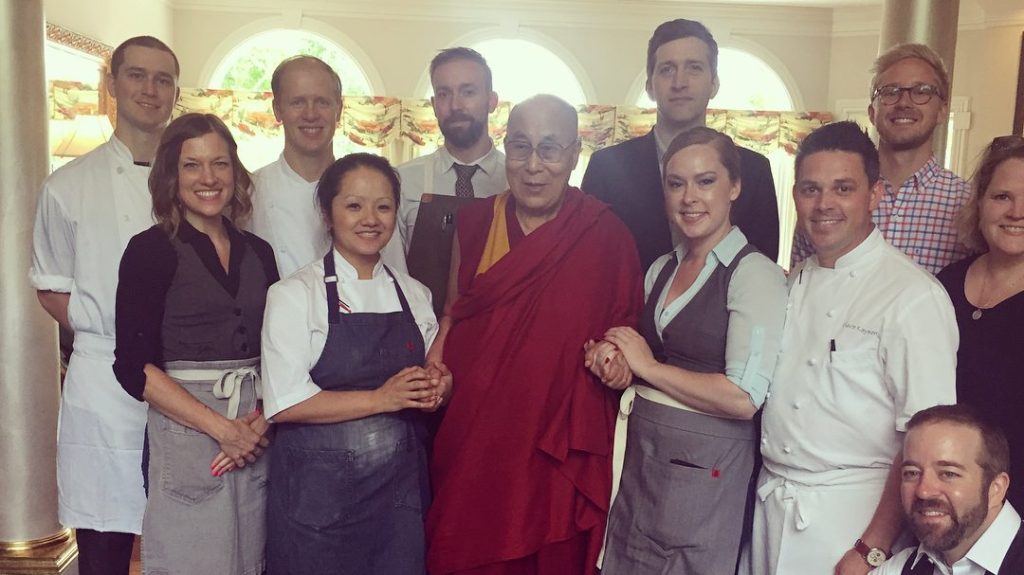 Chefs regularly cook for VIPs because, you know, celebs are just like us, and they’ve got to eat. But sometimes there’s a really rare guest who sticks in a chef’s mind. For Gavin Kaysen of Spoon and Stable and Bellecour in Minneapolis, that extremely memorable diner visited last year: the Dalai Lama. Kaysen, a longtime protégé under Daniel Boulud, returned to the Twin Cities in 2014 to open his first restaurant and start creating his own legend in his hometown. So when the Tibetan spiritual leader was in Minneapolis to meet with a philanthropic organization that helps the hearing-impaired, the Dalai Lama needed a place to eat—and Kaysen was the right man to call. Kaysen told Robb Report how he came to be cooking for the Dalai Lama, what he served, and whether it felt like any other event he’d done.

How did this end up happening?
A friend of mine in New York City knew the guy that was curating the experience for the Dalai Lama in Minnesota, so he connected me, shot me an email, and said, “His holiness is in town in two weeks. Would you cook him lunch? It’s for 40 people at this private residence?” I said, “Sure, happy to.” Two weeks later, we’re cooking for the Dalai Lama.

What did you cook for him?
He was with Forest Whitaker, who’s vegan, so most of the meal was vegan as a result. We did a chilled carrot soup to start. And then the Dalai Lama, his holiness, he wanted fish and a lot of vegetables. We did like a dozen vegetables in a clear broth, like chicken consommé, and served that with halibut. And then we did a crepe cake with peaches.

Why was he with Forest Whitaker?
Forest Whitaker was traveling with him. I’m not really sure why. It was a pretty interesting experience, because his holiness had roughly 17 or 20 people that travel with him. There’s seven monks who are very specific to his schedule and are his handlers, I guess, for lack of a better term. Yeah, his posse. It was cool. He’s got a helluva presence, that’s for sure. You very much know he’s in the room.

Did this meal make you more nervous than a normal event?
It felt the same approaching it. He made it feel the same, is actually a better way to describe it. Right when his holiness walked in, he came straight to us at the kitchen, shook all of our hands, said hello, ate some of the canapes that were on the table, and then sat at the table next to us while the rest of the guests started to show up. And then I served him over there so he could start to eat right away, because one of his handlers was like, “His holiness needs to eat immediately. He’s 20 minutes past when he should eat,” or something like that. I said, “Okay.” It was really cool. I never would have thought I would have cooked for the Dalai Lama, let alone in Minneapolis.

Why did he have to eat right at that moment?
He just has a schedule of when he eats and his morning session, he’s had like a Q&A, and I guess it went a little bit late.

Was there anything different about him as he ate that seemed different or out of the ordinary?
No. He told great stories though. He was very funny.

Was there anything that stood out to you in particular?
The funniest thing was actually not done by him, but this house that I was in was this beautiful mansion, and there’s probably 30 or 40 signed guitars in the basement that this gentleman probably purchased at auctions—guitars from Garth Brooks, Bruce Springsteen, and more. So I’m coming down the stairs to make sure the dessert is ready to go out to the dining room, and I look over and two of his monks are in there playing the signed guitars. And I’m like, “It’s not really my house, but I’m pretty sure you can’t touch those. But you’re with the Dalai Lama, you can touch whatever . . . you can have . . .they’re yours; keep them.” It was awesome.