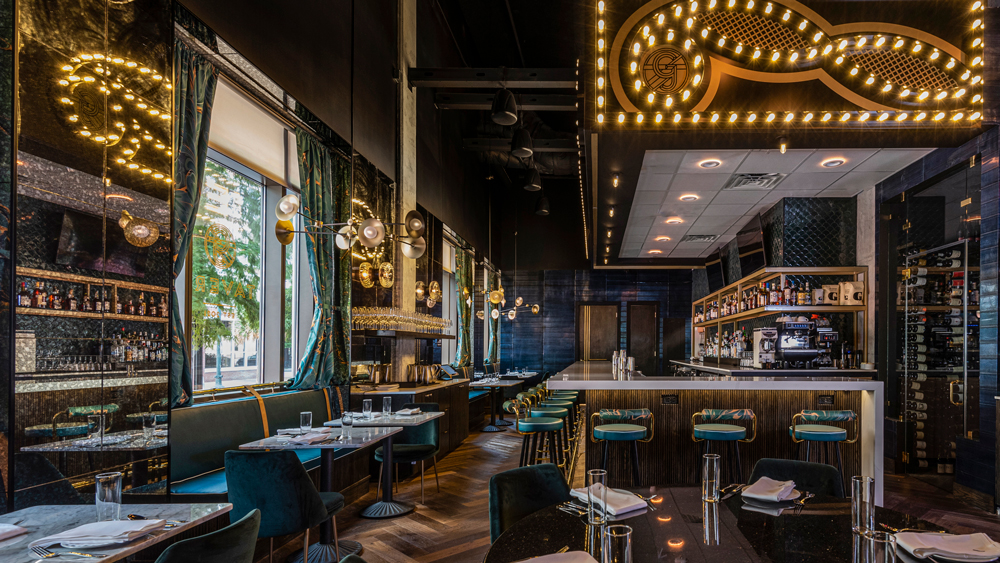 To Chris Shepherd, it’s not just a club sandwich. “We smoke our own turkey in house, we brine and smoke our own ham in house and when I take a bite—it’s beautiful,” the chef says as he readies his newest restaurant, Georgia James Tavern in Downtown Houston.

At the original Georgia James, a club sandwich isn’t an option. In a state known for its love of beef, Shepherd built a destination steakhouse his way. At Georgia James he broke with conventional steakhouses, cooking all the cuts in cast iron pans and conjuring up dishes that draw on the rich diversity of cuisines from around the globe. The Tavern is of the same family but, like a younger sibling, it will seek out its own identity by serving high-level comfort food, the kind of fare you can have every day as opposed to making it an occasion.

It’s also a new challenge for Shepherd, as he expands within the city to a part of town he never imagined he’d venture. To this point, he’s set his establishments among the restaurants and bars of the city’s hip Montrose neighborhood, but now Shepherd heads to the towers and offices and performing arts spaces of Downtown Houston. The Tavern, opening Tuesday, is the evolution of a chef and business owner who has weathered the pandemic and learned some hard-won lessons.

The pimento cheese is baked in the hearth.  Photo: courtesy Julie Soefer

The Tavern’s kitchen will be led by Matt Coburn, who takes over as chef de cuisine after six years working for Shepherd at both Underbelly and, most recently, Georgia James, where he served as sous chef. He’s built a menu that shares ideas with other Shepherd restaurants, like incorporating Viet-Cajun flavors in the wings, cooking steaks in cast iron (you’ll have a choice of ribeye, NY strip and a rotating butcher’s cut), sourcing beef from 44 Farms and serving Georgia James’ take on the classic wedge salad.

However, the menu is original to the Tavern, with dishes like hearth-roasted chicken with coconut sticky rice, papaya salad and peanuts, thin-sliced country ham served with pimento cheese baked in the hearth and thick fries with smoked oyster mayo that you can get topped with kaluga caviar.

Georgia James Tavern will occupy a cozy space at the foot of the Market Square Tower, a downtown residential high rise completed in 2017. When Shepherd saw the space—with room for 40 seats inside and 40 outside—it was the built-in clientele the building could offer him that won him over to the spot. “It’s got its own movie theater, it’s got half a basketball court, and it’s got a pool on the 42nd floor that comes over the side of the building with a glass bottom where you can literally look down 42 stories without leaving the pool,” Shepherd says.

As an added bonus, the residents also appear to have a voracious appetite, but are more than willing to let someone else to do the cooking. “There are 400 units and they said they’ve had something like 340 third-party deliveries per day, so almost everyone is ordering something every day,” Shepherd says.

Thus, more so than his other restaurants, Shepherd is building this one with takeout in mind. The Tavern also will offer to-go cocktails that make it easy for residents to grab the kits with some food and head up to the pool. He’s also taken the liquor license for the whole building, so if there’s a Super Bowl watch party in the building’s theater, he could serve food and drinks there.

Since the pandemic, he’s been focusing on ways not just to gather people at a restaurant like he did in the past, but feed them where they are. And he’s diversified his offerings to include Goldbelly and a line of smoked bacon sausages that are available at a local grocery chain and for nationwide delivery.

He’s in search of a stability after a year of chaos for the restaurant industry, even though he’s been known for constantly changing—even going so far as to attempt the crazy-ambitious gambit of signing a lease for a restaurant where he committed to overhauling the concept every single year for five years. (That restaurant, One Fifth, is just wrapping up its fifth and final concept.)

“It’s funny, because my life was based on a level of inconsistency, but now I want to find a level of consistency,” Shepherd says of his predilection for constant experimentation his his career. “Maybe it’s getting older, I don’t know. I want to have fun with these things and challenge ourselves, but we want to think about how can we make better business decisions and make better decisions for our staff instead–and, you know, maybe not do a restaurant that changes every month.”