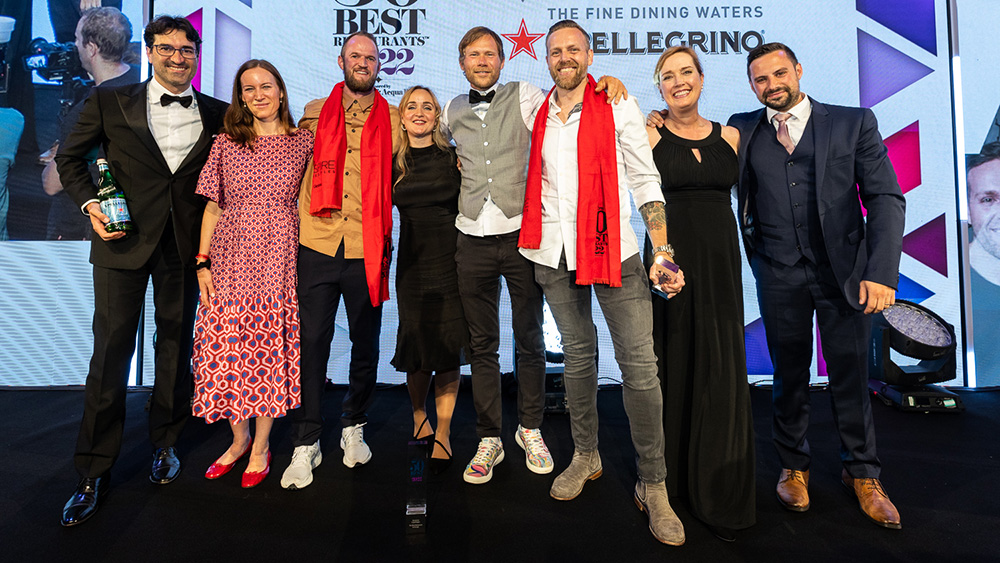 When the World’s 50 Best Restaurants organization announced its Nos. 51 to 100 earlier this month, it seemed like the top 50 list was primed for a major shakeup. And while 12 new entries did make the cut for 2022, there weren’t many surprises at the very top of the list.

At an awards ceremony held in London on Monday night, hosted by Stanley Tucci, the World’s 50 Best Restaurants were announced in style. With last year’s winner, Noma, out of contention (previous winners are no longer eligible to claim the top prize), the former No. 2 restaurant Geranium took the top spot. The chef Rasmus Kofoed accepted the honor with a moving speech about finding his place in the culinary world.

“When I was young, I also had the same questions in my head as many youth: Where do I belong in this world, and in which direction should my life take me?” he said. “Later in life, I found myself in a space full of flavors, aromas, beautiful patterns and colors, surrounded by the same spirit and people sharing the same vision. My determination and curiosity to learn more each day gave me confidence, and finally I found the world where I belong.”

Kofoed and Geranium, which sits inside a soccer stadium in Copenhagen, have previously won some major accolades, from gaining three Michelin stars to Kofoed being the only chef to receive gold, silver and bronze at the Bocuse d’Or, the culinary world’s Olympics. The No. 1 restaurant honor is just the latest to recognize the chef’s (recently meat-free) cuisine, which leans more European than the New Nordic style that overtook Copenhagen after Noma’s initial success.

The rest of the top five were Lima’s Central, Barcelona’s Disfrutar, Madrid’s Diverxo and Mexico City’s Pujol. Most of those came from last year’s top 10, but Diverxo jumped all the way to No. 4 from No. 20. The biggest leap overall, however, was achieved by Berlin’s Nobelhart & Schmutzig, which moved from No. 45 to No. 17 this year.

Restaurants in the United States fared poorly, with only three making the cut. Of those, New York’s Atomix was the highest ranked, coming in at No. 33. That left room for some exciting newcomers to the list, which included La Cime in Osaka, Japan and Fyn in Cape Town, South Africa—two cities that weren’t represented at all last year. Perhaps that’s a sign that the World’s 50 Best organization is becoming even more global in its scope, leaning away—at least slightly—from the major Western cities that it mostly focused on in the past.

However, it’s a ranking that has received criticism, with top chefs voicing their reservations.

“I used to vote, myself, for many years for World’s 50 Best Restaurants and the original idea was brilliant, but I no longer think it’s a brilliant idea,” Magnus Nilsson told Robb Report last year. “When people discovered you could play the game—you still have to have a great place, but you can actively work to get more votes—then that thing has lost all meaning to me. It’s completely uninteresting. Especially when tourism boards started paying to get the events in various countries, because that means you get a lot of voters in for the event.”

Check out the full list of the World’s 50 Best Restaurants below.