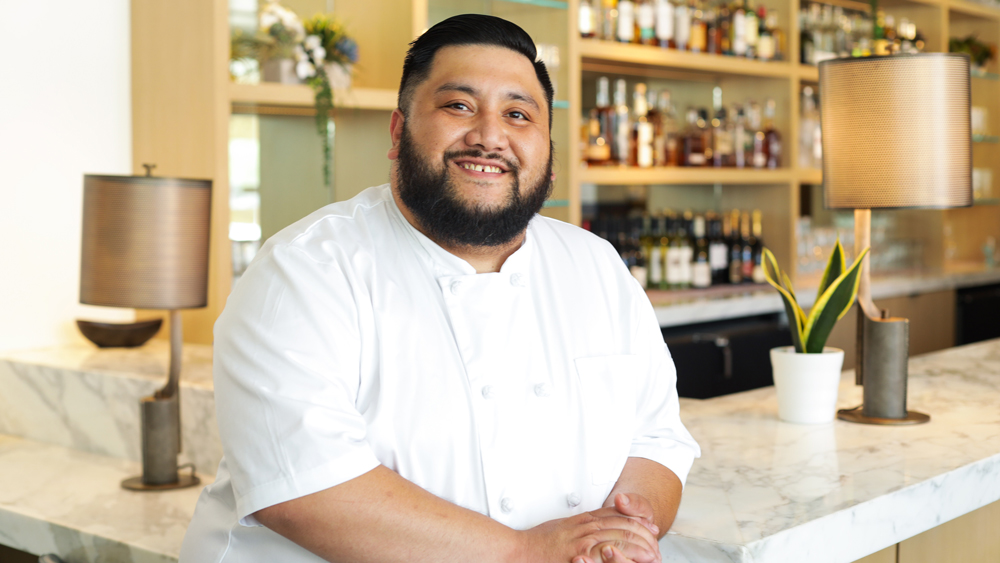 When a well-respected chef singles out an up-and-comer as someone to watch, you take notice. When a panel of culinary masters who include four Michelin-starred chefs do the same, you need to book your flight.

This is the case for chef Geter Atienza, who begins a residency at Abernethy’s at the Music Center in downtown LA on Aug. 10. This unique incubator showcases rising chefs in LA through its Emerging Chef Program; a chef is selected by the restaurant’s culinary advisors, then offered a season-long residency to prove what they can do.

Atienza, who made a name for himself at LA’s Broken Spanish, was chosen by chefs who include Atienza’s mentor, Ray Garcia (Asterid, ¡Viva!), along with Curtis Stone (Michelin one-star Maude, Gwen), Govid Armstrong (The Lobster), Susan Feniger (Border Grill) and Niki Nakayama (Michelin two-star N/Naka). He is taking over Abernethy’s kitchen and staff and presenting a limited-edition, modern Filipino menu through December.

“I’m excited but nervous,” Atienza said on the eve of his opening. “[Being considered an emerging talent by these chefs] is a humbling experience. There’s a certain responsibility that comes with that.”

Additionally, the residency is extra special because it will be the first chance Atienza—who immigrated to California from Pasay, Philippines, when he was 7 years old—has had to cook Filipino food professionally. It’s personal.

“This whole menu I’ve only cooked at home,” he said. “My mom, my grandmother, my grandpa, my dad … they all cooked their versions of these dishes, but this is my interpretation of it. [The residency] is really bringing [my culture] to life.”

Atienza’s career began at Fig in the Fairmont Hotel in Santa Monica, as an intern under Garcia. He also worked for Thomas Keller in Las Vegas at Bouchon Bistro, then in New York at Bouchon Bakery and Café. He was sous chef at New York’s Sho under Chef Shaun Hergatt when it was awarded two Michelin stars.

Atienza later returned to Fig, moving his way up to chef de cuisine, then helped Garcia open BS Taqueria and Broken Spanish, continuing to serve as chef de cuisine. He is now the executive chef for GVO Hospitality, which operates Hilltop Coffee + Kitchen and is building two new restaurants this year.

He was selected for Abernethy’s Emerging Chef Program pre-pandemic and his vision is just now coming to life.

“This is a great program because it takes local chefs in LA and gives them a platform to really shine,” he said. “It’s hard to do that in such a competitive field … I want people to recognize that I have a certain voice in the culinary field. What I’m cooking at Abernethy’s is my food. It’s really a reflection of myself.”

Atienza has traveled back to the Philippines many times in his life and considers his food a modern take on the classics. Modern for him involves updating the presentation, technique and product. For one thing, he is dehydrating herbs and making his own spice blends, which he says is not done in the Philippines. His plating is also more intentional, he said; he is not scooping rice on one side of the plate and meat on the other.

He is also complicating the technique. For example, his take on oxtail “kare-kare” (rustic oxtail-peanut stew) involves turning the meat into sausage (crépinette) before roasting it with eggplants, long beans, bok choy and peanuts. He’s also taking full advantage of the high-quality produce and fish available to him in LA He’s swapping in local collard greens for mustard greens in his big shrimp and coconut milk “hipon at laing” dish.

And he’s bringing a distinctive Angeleno point of view to the dishes. For example, he will prepare lamb ribs “adobo” style, marinating them in soy sauce, rice wine vinegar, laurel leaves, black garlic and black peppercorns, then searing them on a grill. Traditionally, Filipino adobo cooking involves simmering meats like chicken and pork in a peppery sauce. He’s also making marinated yellowfin tuna “kinilaw,” his take on the customary ceviche-like dish in which he cooks the fish in calamansi citrus juice and vinegar, then pairs it with coconut, chiles, red onions, cucumbers and rice crackers.

Atienza will present a full restaurant menu, including starters, mains and desserts like custard flan topped with leche and fennel flowers. The cocktail list also incorporates Filipino ingredients like ube (purple yams) and lemongrass. The chef decorated the dining space with photos of his family members, who inspired his career and who were able to try the dishes for the first time only recently.

“My mom, my grandma, my sister were all there and they told me they really loved it,” he said. “‘It was like we had never had Filipino food before,’ they said. There were happy faces and only empty plates were coming back.”