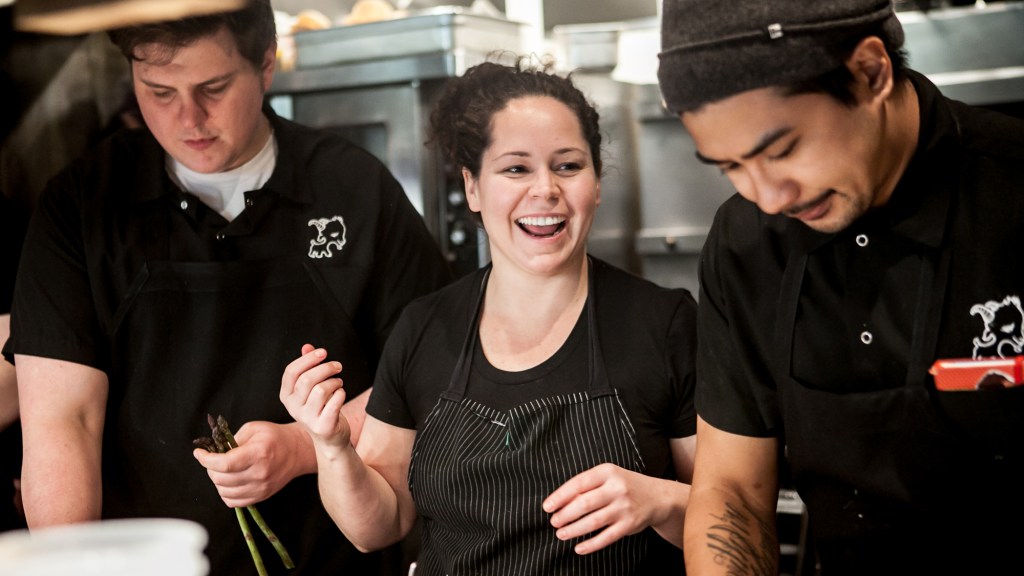 On any given night in Chicago, it’s a pretty safe bet that you’re not getting a reservation at Girl & the Goat. Nearly eight years into its run in Chicago’s flourishing West Loop dining scene, Stephanie Izard’s flagship restaurant is still a hot ticket. Izard has since expanded her footprint in the neighborhood, adding the Little Goat Diner and Duck Duck Goat—the restaurant she describes as “reasonably authentic Chinese food.”

She recently released her second cookbook, Gather & Graze, sharing recipes from her hit restaurants for those unable to nab a reservation. But it wasn’t overnight success for Izard. Before she partnered with Kevin Boehm and Robb Katz of the Boka Restaurant Group to start building her stable of restaurants, she owned a place in her twenties that wasn’t the hit she’d hoped for. Then, even after she became the first woman to win Top Chef, she felt the pressure to perform when opening her second restaurant.

But this decade, her restaurants have thrived, serving really delicious, globally inspired fare in fun and casual settings. We sat down with Izard to discuss how Girl & the Goat came to be, how she builds a restaurant, and the inspiration behind Duck Duck Goat.

How did you get connected with Boka Group?
I owned my first restaurant before I worked with them called Scylla that I opened when I was 27. I had it for about three years, and I sold it because I was just overwhelmed with owning a restaurant by myself. I went to film Top Chef and made it to the finals, but we hadn’t filmed the finale—so I hadn’t won yet—and I was back in town having dinner at Boka one night. Rob and Kev came over to the table, and they’re real schmoozy-woozy. They’re like, “Hey, we’re Rob and Kev. Want to come have a drink?” I was like, “Yeah, sure.” They expressed an interest in doing a restaurant together, but I was already working on it myself with a friend. We’d found a space and lawyers, and I said, “No, I’m good.” I didn’t want to be part of a restaurant group.

What changed your mind?
I got a little further along in the project with my friend, and I started thinking that the first time I opened a restaurant, it was kinda cute—this 27-year-old girl with a restaurant, not that there was anything that needed forgiving. But, you know, people were just like, “Oh wow, this place is great. Like this tiny little restaurant, how great.” But this time it was going to be, “Oh, this chick won Top Chef. This place better be really perfect and awesome.” And everybody likes to be able to talk crap about bringing somebody down, you know what I mean?

You could feel the spotlight was really going to be on you.
People are going to come with a fine-tooth comb and point out every little thing. I started thinking that maybe it would be better to go work with some people that know more than I do so that I can learn from them, and divide and conquer, and just open something really badass.

I called them up, and they picked me up in one of their swanky automobiles—which have gotten swankier over time to be sure. We drove around town and looked for a space, and I was just sitting in the back. They finish each other’s sentences and stuff. Rob and Kev will sit on either side of you finishing sentences, and you’re like, okay. So they’re doing their whole shebang-o in the front seat, and they asked, “What kind of restaurant do you want to do?” They hadn’t even asked that question yet, and I said, “I want to open a place called the Drunken Goat, and I want it to be super fun, great food, great service, but super casual—like you could go every day of the week.”

And Kevin turns around and says, “Yeah, good. I was nervous you were going to say something about a white-tablecloth restaurant.” I said, “No. Super not me.”

I like the idea of a place where people just want to come just because they want to go out for dinner—not necessarily that you’re saving it for a special occasion. And I think, especially when I opened Girl & the Goat, I mean, I was there every single day, and I’m standing in the dining room, and I wanted it to be fun for myself.

So you were on the same page.
Kevin thought it was great that I wanted to go more casual and just sort of share plates, fun, and food from all over. But it’s funny, probably a month before we opened the restaurant was the first time they ever tasted anything I made.

Oh, really?
Yeah. So they very much were trusting. And they’ve always been like that. We went to all the meetings together, but it’s always them saying, “What do you want?” We collaborate on all three restaurants, but at the same time they let me make final decisions on a lot of things. And then they trust me with it. It’s a nice relationship.

With so many influences, how do you define what a Girl & the Goat dish is?
I feel like it keeps changing. I mean if you look at the menu, there’s definitely things on the menu now that have been on since we opened. And they will never leave—the green beans, cauliflower, things like that. But it’s funny, the other day I put on this dish with a rhubarb aguachile, and it’s super spicy. And I never put anything super spicy on the menu, but mixed with everything else it’s not overkill.

I don’t really set any sort of boundaries; I make whatever I feel like. I never make anything too exact to a culture because it doesn’t fit. One of our pastry cooks the other day had this fun idea for dessert, and I said, “That’s something that you would find on a menu at Momotaro,” which is a Japanese restaurant in town. You could have some of those components and those flavors, but it has to be more inspired by another culture. We’re not going to put a falafel on the menu, but we could have chickpea fritters.

What’s a good example of that?
I’m working on a new chicken dish right now that’s got a sticky ramp glaze made out of vinegar and honey and grilled ramps. And there’s this crunchy topping of peanuts and this Thai-inspired spice mix I made. It has some crispy coconut and crispy puffed rice, and it’s this yummy crunch stuff that will go over the sticky chicken. I put it together after reading a Thai cookbook and thought to myself, “I haven’t put anything Thai-inspired in a while.” But it’s not specific to any Thai dish. It just makes me think of Thai food.

How did you decide to open Duck Duck Goat?
We have a private dining room that has a kitchen, and we did these Sunday suppers for a little while, and we did a Chinese one. I’m really a huge procrastinator, so I literally woke up the morning of the dinner at like 6 am and just started doing some research and put together this Chinese menu. I decided to try to make some dumpling wrappers from scratch that I hadn’t done before, like different styles. And some of them worked. There were some more Americanized things, too. We did fried rice and stuff like cashew chicken. I took a bunch of leftovers home to my husband, and we were like eating it—like you do with Chinese takeout—and we looked at each other. I was like, “This is really delicious.”

I went to Rob and Kevin and said, “I have an idea. I want to open a Chinese restaurant.” And their eyes lit up. They were so excited and thought it was the best idea ever. Which totally surprised me. I was ready with all my reasons why that I was going to tell them. And they were like, “Yes.” I was like, “Okay.” So then it started off as not like a side project, but we thought we’d just take the menu that we did but make it better. And we don’t have to dive in that much. We’ll just do Americanized Chinese food.

But you ended up doing more research than that, right?
Yeah. I thought, “Wait a minute. I don’t want to open a Chinese restaurant and not go to China and not really think about this.” So we went to China for a couple weeks, and we went to Taiwan for a couple weeks. Obviously, we did not learn the whole culture in that month. But it definitely opened my eyes up to so much more and made me teeter more towards the authentic side than I had originally planned.

But it’s something you call “reasonably authentic.”
For Duck Duck Goat, I did a little tasting for Rob and Kev, like months before it opened, and it did not go well. And I was so upset because we were making things trying to be straight-up Chinese instead of our version of it. And Kevin’s like, “Just be you. You need to be more you.”

Did you worry about being accused of cultural appropriation?
I don’t know, we’re just making tasty food, and a lot of it is all Chinese flavors, but I’m not pretending that I’m Chinese or anything like that, obviously. Anybody that has something negative to say, I would respond that I don’t think there’s anything wrong with celebrating cultures from around the world or making foods from around the world, as long as you’re making something delicious and not pretending that you are making it better than they are.

I make fresh tortillas, and I’m not from Mexico, but I know that I know how to make a nice fresh tortilla. But I’m not going to pretend that they’re any better than anywhere else. I have a friend who opened a restaurant; it’s called DanDan. He opened it in Milwaukee, and it’s a Chinese restaurant. The two chefs’ names are Dan. Dan and Dan. And I think it’s extremely clever to call it DanDan after Dan and their noodles. But they got so much crap all over their Facebook when they said that. And he was asking me, he’s like, “I don’t know what to do.” And I was like, “Just make your restaurant really great. And then they won’t have anything to say.”