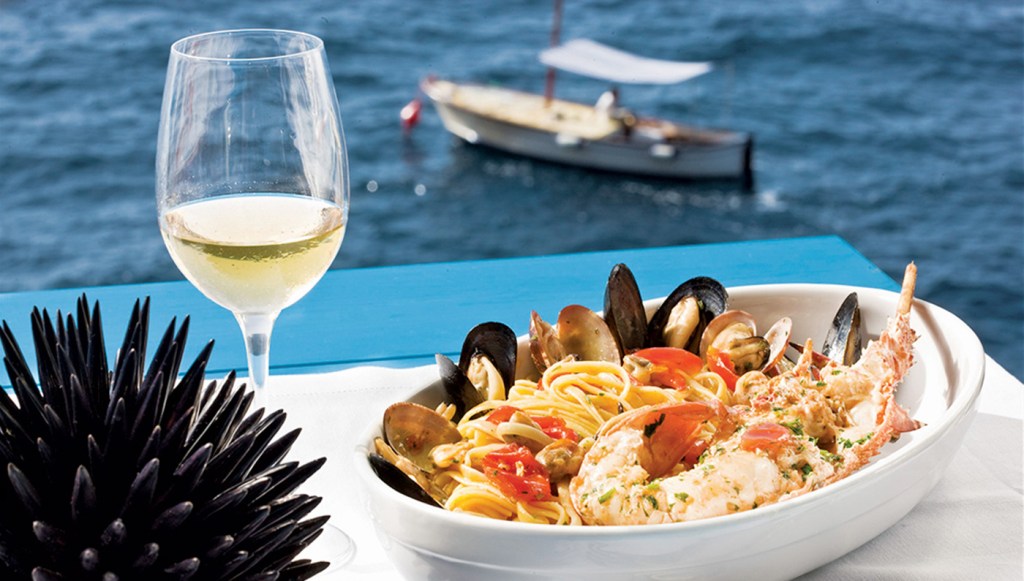 In the Bay of Naples, every island has its own distinct—and delicious—cuisine.

Capri, Ischia, and procida, the trio of beautiful islands in the Bay of Naples, are like surprisingly dissimilar siblings whose explosive father, Mount Vesuvius, watches over them, languidly sending curls of white smoke into the cerulean skies—wispy warnings of an unpredictable temper. If the looming volcano serves as patriarch, however, then the chaotic, big-hearted city of Naples might aptly be cast as la mamma to the islands. This ancient, teeming town situated on one of the world’s most magnificent natural harbors is also one of the world’s great food cities, as revealed by even the most casual of strolls through its narrow lanes redolent of home cooking.

Because so many Neapolitans migrated to the United States, hybrid versions of this cooking—along with interpretations of that from Sicily—have become synonymous with Italian food for most of those in the States. Yet the true indigenous food of Naples and the rest of the Campania region is completely different from the fare found in North America. One simple reason is the spectacular local ingredients: The rich, volcanic soil of small local farms produces some of the world’s best tomatoes, eggplants, peppers, citrus fruits, and nuts; delicate mozzarella is made from the milk of water buffalo; and pristine seafood is pulled directly from local waters.

The Neapolitan kitchen is itself a cultural crossroads. Prior to the unification of Italy in 1861, the city’s many rulers—the Greeks, Byzantines, Normans, Spanish, Austrians, and French—left behind their gastronomic imprints. The Greeks brought a taste for citrus, grapes, and olives, while the Normans favored cheese and the rotisserie. It was the Spanish, however, who truly redefined Neapolitan gastronomy after introducing delicacies from the New World that quickly became regional staples—tomatoes, peppers, potatoes, beans, and coffee. Indeed, the first European cookbook to include tomato recipes was published in Naples in 1692.

Although the inhabitants of the city and its islands share a passion for local dishes, such as the garnished wheat-flour flatbread known the world over as pizza, styles of preparation in each of these locations differ from one another, expressing distinct personalities and histories.

Capri has recently emerged as a showcase for contemporary Campanian cooking, and its carriage-trade clientele provides an eager audience for young chefs looking beyond such classics as spaghetti alle vongole. “The quality of the Campanian larder is superb,” says Salvatore La Ragione, chef at the Michelin-starred restaurant Mammà. “And traditional Campanian cooking is very healthy, because it uses olive oil and lots of vegetables and seafood. But I wanted to do it differently, so that the natural tastes of everything I cook are highlighted rather than hidden. This is what contemporary cooking in Capri is all about, making our magnificent Mediterranean diet modern.”

In contrast, most of Ischia’s restaurants remain proudly rustic and traditional—an ambience appropriately complemented by the fare, which, thanks to this large island’s wooded interior, combines such earthy delicacies as rabbit and snails with the seafood that dominates most menus in this coastal region. On tiny Procida, dining is simple, spontaneous, and almost unavoidably family style: The island’s approximately 10,000 inhabitants are almost all related to one another through bloodlines or through recipes passed down over the course of generations. Although Procidian cuisine closely resembles that of Naples proper, it also boasts many native dishes (many prepared with the island’s large perfumed lemons), including stracci cozze e broccoli—ribbons of pasta with broccoli and mussels—and lingua Procidiana, a flaky, lemony, custard-filled pastry found in most cafés and restaurants.

For food lovers, table-hopping across the Neapolitan Archipelago offers a number of rewards and surprises. Naples is a street-food city par excellence, but the only acceptable ambulatory eating in Capri is an ice cream cone. The royalty, aristocrats, artists, and glitterati who have made the island an enviable destination since around AD 27, when the Roman emperor Tiberius fell under its spell and built a villa there, have always insisted that the settings in which they dine be as spectacular as the food they are served.

For this reason, among others, Il Riccio (ristoranteilriccio.com)—the seaside restaurant of the Capri Palace Hotel and Spa in Anacapri—is one of the island’s best-loved establishments. The elegant nautical decor, which pairs blue-painted wooden tables with canvas sun curtains and a ceiling of woven reeds, not only enhances the aquatic surroundings but also sharpens diners’ anticipation of enjoying the fruits of the sea. Offering an assortment of dishes that blend tradition with modern restraint, Il Riccio (“the sea urchin”) specializes in traditional and contemporary plates. Among the classics, one might choose marinated anchovies with couscous and tomatoes, fusilli with squid and eggplant sauce, or salt cod with a crust of breadcrumbs and a sauce made with celery, green olive, and yellow tomato. The more modern menu items range from tuna tartare with tomato-and-celery salad to turbot cooked in a salt crust.

Occupying a vast terrace with a colonnade during the summer months, the Capri Palace’s other restaurant, L’Olivo (capripalace.com), is the most gastronomically ambitious on the island. Chef Andrea Migliaccio has won two Michelin stars for his brilliant interpretations of Capriote and Campanian classics, such as provolone-seasoned risotto with artichokes, candied lemon, and local red prawns; superbly light ravioli stuffed with squid and potato and covered in pappa al pomodoro and a sauce of smoked provola cheese; and sea bass with lemon-scented mayonnaise and bitter rapini. For those who fancy a culinary frisson or two, more adventurous dishes include red shrimp carpaccio with goose liver, green apple, and a gin-and-tonic garnish, or red mullet served with crunchy calf’s head and licorice mayonnaise—a successful play of contrasting textures.

Another ambitious venue, Monzù (monzucapri.it), takes its name from the Neapolitan argot for monsieur, a linguistic remnant of a long-vanished era when the Neapolitan aristocracy employed French chefs. The name is an apt one, for Monzù enriches its creations with Gallic influences and touches such as the delicate squash blossoms that festoon the baby clams in its version of spaghetti alle vongole, which is as visually stunning as a still life. Operating on a similarly elevated plane, Salvatore La Ragione has made Mammà (ristorantemamma.com) in Capri town a Michelin-starred hit since its opening in 2013. La Ragione’s reputation rests in part on the delicate layers of his mixed-vegetable salad garnished with fine strips of cuttlefish, as well as on the fine texture of his dried-fig risotto with basil pesto and salt cod—a clever southern riff on the classic Italian rice dish from northern Lombardy. Those visitors to Capri who prefer more casual cuisine flock to the enchanting Paolino (paolinocapri.com) to dine alfresco in a fragrant lemon grove on spaghetti Paolino with anchovies, capers, tomatoes, and parmesan, or the grilled salt-crusted pezzogna, a prized and pricey local fish.

Although Emperor Augustus ceded the island of Ischia to the Neapolitans in exchange for Capri, this ancient slight does nothing to diminish Ischia’s considerable charms. This large island at the northern tip of the bay has a large year-round population, regular ferry service to Naples, and an economy that depends as much on farming as it does on the tourists who dally in its celebrated volcanic springs.

The very informality of Ischia accounts for its allure, and this relaxed attitude extends to the island’s cuisine, which emphasizes succulent rusticity. A delicious address for a first meal is Il Focolare (trattoriailfocolare.it), a simple but excellent family-run trattoria in Barano d’Ischia that serves beautifully made versions of classic farmhouse dishes, such as lumache all’Ischitana—wild snails harvested from the vineyards in the middle of the island and stewed in a sauce of carrots, onions, celery, and olive oil—and coniglio all’Ischitana, rabbit braised with tomatoes in white wine, olive oil, and basil.

The rich flavors of this rural cooking also inspire the island’s more experimental chefs. At Indaco (reginaisabella.it), one of the island’s more formal restaurants, rabbit may be roasted with clams and seaweed or served with an emulsion of shrimp, lemon salt, and broccoli. The island’s leading seafood restaurant, Umberto a Mare (umbertoamare.it), offers not only spectacular views of the Mediterranean but also an array of intriguing dishes, such as fish meatballs served with escarole stuffed with cooked grape must and amberjack with caper sauce.

Tiny, pretty Procida may be best known as the location where the films Il Postino and The Talented Mr. Ripley were shot, though it continues to be mostly overlooked by tourists. Disembarking in the port of Procida town, visitors pass houses along the waterfront painted a full palette of Easter-egg pastels, and they receive warm welcomes from English-speaking locals: Procida has an ancient tradition of sending its men around the world to work as sailors or in the merchant marine.

The island’s earthy, friendly personality emerges in the kitchen as well: Dishes at home and in restaurants tend toward the rustic and rely on modest ingredients. Due to Procida’s small size, most vegetable gardens are no larger than double beds. But the steeper slopes of the island are planted with citrus—especially lemon, bergamot, and clementines—and during centuries past, when the islanders mostly lived off of what they grew and caught in the surrounding waters, the primary seasoning was the zest, juice, and leaves of these trees.

The lemon salad at Caracalè (+39.081.896.91.92), a lively restaurant overlooking the waterfront in the port, might be the single most representative dish on Procida. This mélange of chopped lemon seasoned with chopped onion, mint, and hot red pepper, though basic in principle, enlivens the palate with its complex flavors. In addition to an excellent catch of the day hauled in by the island’s small fishing fleet of some 20 boats, Caracalè prepares several specialties, such as a swooningly good spaghetti with sea urchins and rigatoni with a sauce of stewed octopus.

The nearby restaurant Gorgonia (+39.081.810.10.60) is equally casual and lively: Diners vie for tables on the terrace overlooking the port when the weather is fine. The menu and catch of the day vary, but fortunate travelers will enjoy the excellent octopus salad or the rigatoni sauced with tomato and succulent spiny lobster, and, if it is on the menu, panna cotta for dessert. Those embracing the carefree spirit of Gorgonia—and, for that matter, of the Bay of Naples—will also drink the island’s slightly fizzy, amber-colored wine, chilled down with quantities of ice.