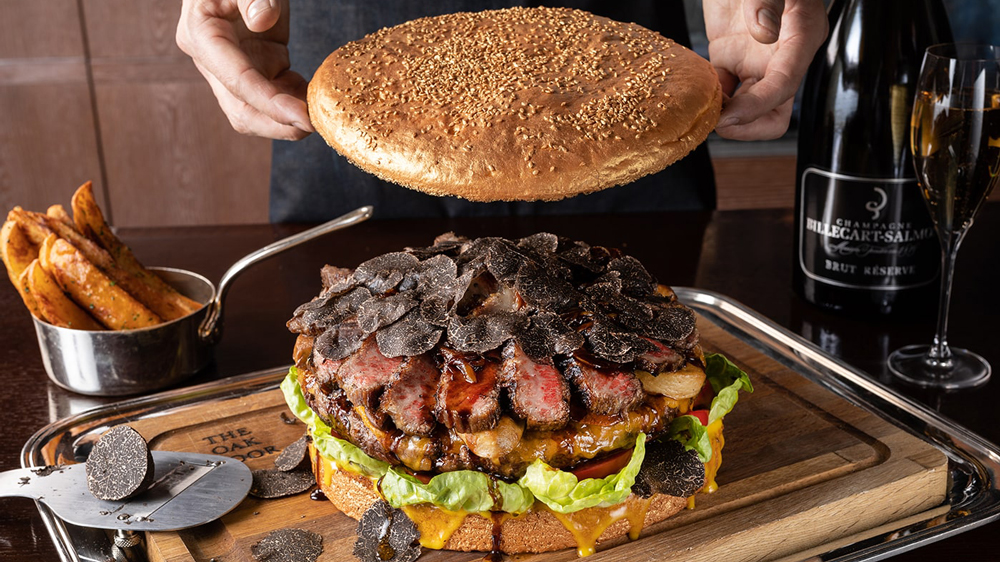 When you’re the President of the United States, you can have as much McDonald’s as you want. But if you’re the new Emperor of Japan, how about a $900, 10-inch-wide, 6.6-pound burger, topped (of course) with foie gras, sliced kuroge wagyu beef and (of course) black truffle.

Yes, behold the 100,000 yen “Golden Giant Burger,” available from the Oak Door restaurant at Tokyo’s Grand Hyatt hotel. It’s served between what appears to be a sesame seed bun, but is in fact “two golden-dusted buns.” As SoraNews24 noted, the beef behemoth also comes with cheddar cheese, Japanese-grown cherry tomatoes, “aioli sauce” and “two onions’ worth of sliced onion. Both a server and a chef will bring it to your table—not because it’s so darn heavy, but because the chef will freshly shave those truffles.

It’s an over-the-top burger for a big deal moment. His Imperial Majesty the Emperor—given name, Akihito—is 85 years old, and said to be in failing health. He’s the first Japanese emperor to voluntarily step down from the Chrysanthemum Throne since 1817. Akihito became emperor in 1989; his predecessor, Hirohito, had served since 1926 (you know him from WWII).

Akihito will be succeeded by his 59-year-old son, Naruhito. In Japan, the end of an emperor’s reign is literally the end of an era; Akihito’s was called Heisei, while the new era will be Reiwa. According to the New York Times, the term can have multiple meanings, including “order and peace,” “auspicious harmony,” “joyful harmony,” and “auspicious and extravagant hamburger.”*

To celebrate, the country is also getting several extra national holidays, in addition to the usual springtime “Golden Weeks,” giving everyone nearly 10 days off. Not everyone is happy about that (including currency and stock market traders)—but at least they’ll have a few days to finish that burger.

“I am honoured to witness this exciting time of change in the Imperial era while working in Japan,” Oak Door’s Japanese-American chef de cuisine, Patrick Shimada, says on the hotel’s website.

The Reiwa era begins May 1, but you can get those burgers now, until June 30. Advance reservations (with at least three days’ notice) are required. The restaurant says the burger can serve anywhere from six to eight people, plus they throw in a side of “triple-cooked giant fried potatoes,” and a magnum of Champagne or wine.

Got a smaller party (or appetite, or wallet)? The Oak Door also has the no-reservation required Golden “R” Burger, described as “regular-size,” for a mere 20,000 yen (around $180). On that one you still get foie gras, wagyu beef and black truffles, plus Madera Sauce and goat cheese.