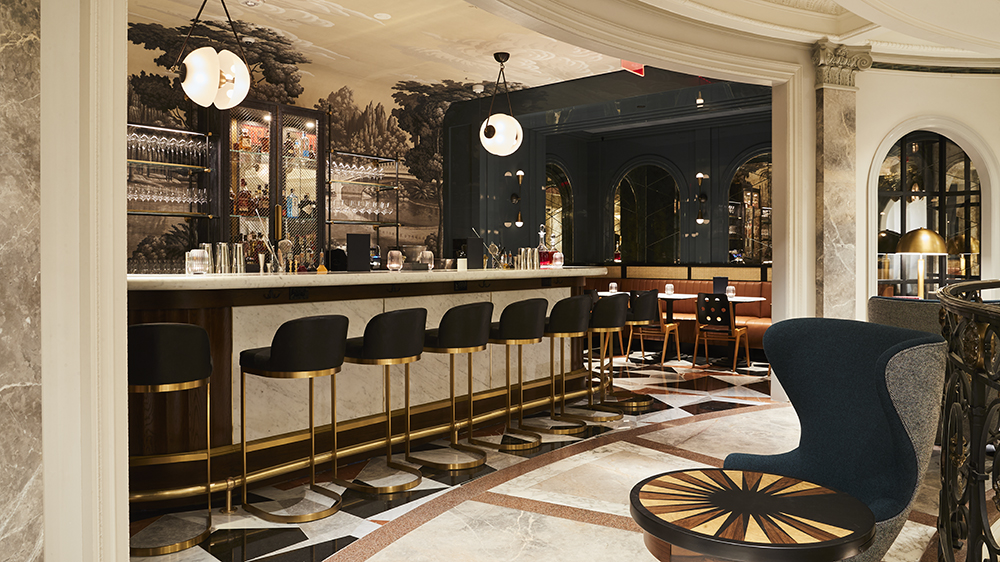 Shopping is hungry work, and that’s even more true when you’re clocking miles in one of the city’s most iconic department stores. Thankfully, Bergdorf Goodman understands this peckish predicament and has opened a brand new dining spot to keep you nourished.

“Our goal was to create a discreet, in-the-know hideaway that’s both timely and timeless,” said men’s fashion director Bruce Pask.

And it appears the century-old retailer has succeeded. Nestled among a few of our old friends—Brioni, Ermenegildo Zegna and Canali—the space feels warm and familiar, like your favorite European haunt—the kind tourists haven’t discovered yet. It’s only by the hand-painted mural of Central Park and the Bergdorf branding that one is reminded of the restaurant’s prime Manhattan location.

Overseeing the kitchen is Michelin-starred chef Austin Johnson of Eleven Madison Park. The Nebraska native cut his teeth alongside culinary heavyweights, like Daniel Humm and René Redzepi, before becoming the executive chef at Frenchie in Paris and earning his Michelin star. The menu capitalizes on the chef’s overseas expertise and features a curated selection of classic French dishes with a contemporary twist.

Instead of the typical blini or shaved ice caviar course, diners get to tuck into what Johnson describes as “our take on sour cream and onion chips,” which sees a generous dollop of crème fraîche topped with a quenelle of Kaluga hybrid caviar and served with crispy house-cut chips. Trust us, it’s as delicious as it sounds.

“In maintaining simplicity and quality, I wanted to create a menu that showcases my time spent in Paris and New York City while also representing the seasonality of the city,” the chef said. Johnson showcases that seasonality as well as his own restraint in the tagliatelle entree, which has very few ingredients and pairs strings of fresh egg pasta with lavish fistfuls of black truffles.

Another simple-yet-standout dish is the little gem salad—the chef says it’s a must, despite it being a salad—it’s got all the greens to make you feel good, but is doused in buttermilk ranch and a crunchy everything crumble. The creamy burrata and buttery king crab roll are also worth sampling.

In tandem with Johnson’s top-notch menu, Goodman’s Bar tapped master sommelier Dustin Wilson—you might recognize him from Eleven Madison Park and that Somm documentary—to curate a unique selection of cocktails, wines and spirits from around the world. The cocktail list is jam-packed with plenty of riffs on the classics: There’s a Goodman’s Manhattan—with Hudson Rye, Carpano Antica and Angostura bitters—plus a gin fizz and a negroni. But we suggest the Vieux Carré, which blends Whistle Pig Rye 10 year, Carpano Antica, Bénédictine and lemon with the ultra-ritzy Remy Martin XO, no less.

The wine list sees classic drops listed alongside more experimental bottles, reflecting Wilson’s holistic approach. “My overall vision was to bring together a great mix of classics and some new wave producers, all with an unwavering attention to quality,” Wilson said.

The Neveu Sancerre Loire Valley 2018, in particular, offered a nice complement to the rich fare. With notes of grapefruit and and herbs, this bright white elegantly cut through the most decadent dishes. Of course, since all wines are available by the glass, you needn’t settle on just one.

Goodman’s Bar will be open daily starting this month. Store hours are observed with the venue open from 10 am to 8 pm, Monday through Saturday, and 11  am to 7 pm on Sundays.

Check out more images of the bar and fare below: