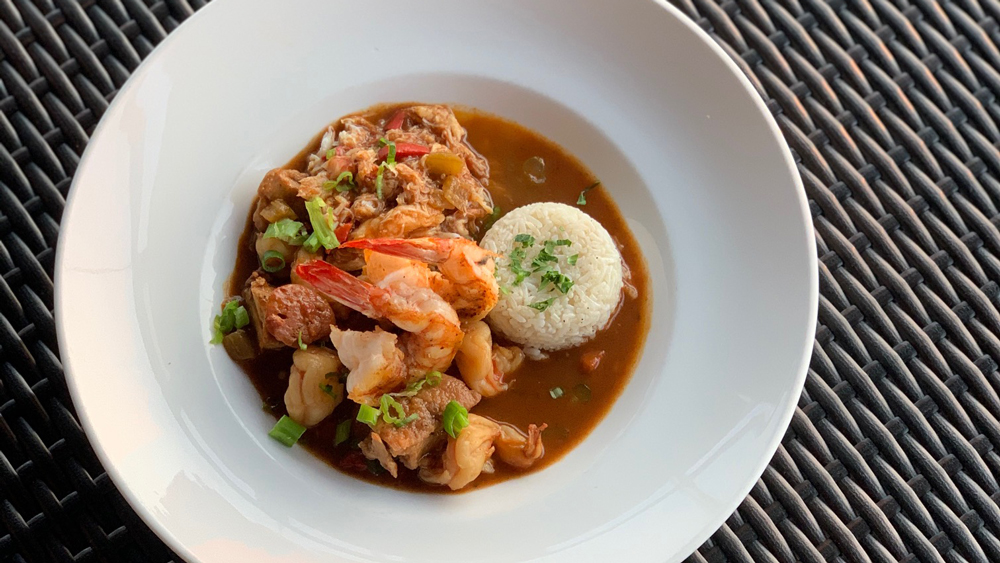 Govind Armstrong’s wild Dungeness crab gumbo at The Lobster is simultaneously one of the most comforting and one of the most luxurious dishes in Los Angeles. It’s loaded with crab meat, gulf shrimp, andouille sausage, organic chicken, buttered jasmine rice and the kind of deep, rich and complex flavors that can only result from slow cooking.

“It’s not really one of those dishes that’s going to win a beauty prize or anything, but that dish is just all about substance and flavor,” says Armstrong, the executive chef and director of operations at The Lobster, a storied restaurant that dates back to 1923 and is located on a bluff that overlooks the Santa Monica Pier and the Pacific. “And you just feel so good after you eat it. It’s not like the type of gumbo that’s going to weigh you down. It’s just very, very clean, but it hits all the notes that it should.”

Creating the gumbo is a three-day process that results in something that’s profoundly savory and umami-rich. There’s a seafood stock made with crab shells, shrimp shells and shrimp heads. There’s also a roasted Mary’s organic chicken stock. These stocks, which include mirepoix and aromatics, take two days to prepare before they’re combined. But Armstrong isn’t done: He intensifies the flavor by frying about a half-dozen whole chickens and leaving them in the simmering stocks for four hours. Then the fried chickens are pulled out of the liquid and used for staff meal at the Santa Monica restaurant. His devotion to The Lobster’s gumbo is a culmination of a rich and influential career.

Armstrong, 52, who was born in LA’s Inglewood area and started working at Wolfgang Puck’s original Spago on the Sunset Strip when he was 13, has been cooking gumbo for his personal enjoyment since his 20s.

“I loved having the basic understanding of what the dish consists of and just being able to make adaptations,” he says. “I always enjoyed the process.”

Armstrong’s background was in French and Italian cooking, but he had an affinity for Southern food. He read cookbooks and became a fan of pioneering Southern chef Edna Lewis. And when Armstrong worked at Puck’s Postrio in San Francisco, he befriended another young cook, Wayne Greiner, who was from New Orleans and had worked for Emeril Lagasse at Commander’s Palace as a teenager. Armstrong and Grenier discussed gumbo extensively.

“He was raised on gumbo and had some fun, insightful experiences with it,” Armstrong says.

But it was Armstrong’s experience at Post & Beam, the pioneering South LA restaurant he opened with restaurateur Brad Johnson in 2001, that made him a gumbo chef in full. Post & Beam in Baldwin Hills is a Black-owned business that has thrived in a predominantly Black community. It is also Armstrong and Johnson’s legacy. The restaurant is now run by chef John Cleveland, whom Armstrong mentored and continues to check in on regularly.

“Post + Beam is one of those restaurants that’s never going to go anywhere,” Armstrong says proudly. “Every community needs an anchor. It needs a restaurant that’s for the people.”

“There was a great woman, a regular of mine, who would come in mostly with granddaughters or great-granddaughters,” Armstrong says. “She was the sweetest woman and just loved to eat and loved to tell stories, a real Southerner in that respect. She had spent many years in New Orleans.”

This woman, Edith Bell, had previously worked as Muhammad Ali’s private chef. She invited Armstrong into her home.

“I’d get there in the morning, and she’d have a half-dozen eggs cooked off and a pound of bacon and grits and toast and orange juice,” he says. “All of this was literally just for me. She would tell stories, and we would just hang out and cook. And that definitely changed my gumbo approach a little bit, just in terms of the timing of adding in ingredients. It’s similar to making a curry. You don’t dump everything into one pot, walk around and then come back. It’s really a matter of trying to layer all the ingredients.”

Before this advanced course on gumbo, Armstrong developed his skills alongside some of LA’s best.

At Spago, Armstrong worked under California Cuisine pioneer chef Mark Peel, who passed in June. He remembers prepping vegetables, perfectly but very slowly. He laughs when he thinks about how a former Spago pastry chef named Nancy Silverton still makes fun of him for the tedious work he did when he was 13, back when his mom had to drive him from their San Fernando Valley home to his summer job. He’s pretty good at dicing mirepoix for his gumbo now.

Armstrong’s career highlights and his influence on LA’s dining scene are significant. At Chadwick, the garden-focused restaurant that he and Ben Ford opened in 2000, he served Santa Barbara spot prawns, fresh Dover sole and the restaurant’s own vegetables and herbs while young cooks like Jon Shook and Vinny Dotolo learned their way around the kitchen. In 2004, Armstrong was named one of People magazine’s 50 Most Beautiful People.

The Lobster at sunset in Santa Monica.  Photo: courtesy The Lobster

Now at the Lobster, where he landed in 2017, he’s running a massive operation that gets in 600 to 800 pounds of lobster a day and isn’t slowing down. Armstrong is also working on a new annex of The Lobster, a Santa Monica food trailer with lobster rolls, ceviches, crudos, smash burgers, hot dogs, beer and cocktails.

Even after all this time and all these accomplishments, he’s happy to choose the labor-intensive path in the kitchen and make 12 quarts of roux for his three-day gumbo.

“The gumbo we have at The Lobster is really consistent,” Armstrong says. “It’s probably some of the best I’ve made. I’m just proud of it and proud to teach people the steps and the different techniques that go into making something that seems to be basic but is really super complex.”

“I always have to get the stamp of approval from her,” Armstrong says. “So every now and then, I have to invite her into The Lobster to have some gumbo on me and just to give me the thumbs up. She loves the gumbo. It’s obviously different than what she had shown me. But she knows that everything is going to evolve and I’m going to put my stamp on it, and she totally approves.”