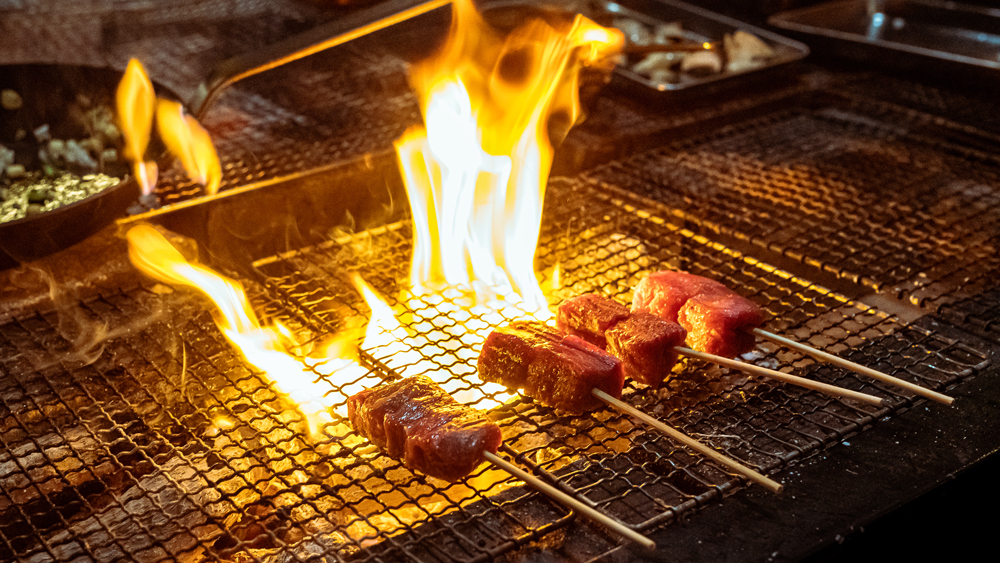 When you go out for wagyu beef—the Japanese breed considered the most delicious in the world—you only expect to get a few ounces, a few bites, before the prohibitively expensive cost drives you to fill up on other menu offerings.

But at a new restaurant in San Francisco, there is nothing else to fill up on. The entire menu at Gozu is Japan-raised wagyu beef, a head-to-tail dining experience wholly unique in the U.S. and a sharp contrast from the traditional American steakhouse.

“We’re really digging down deep into what great beef is,” executive chef and co-owner Marc Zimmerman said. “I’ve always thought that the steakhouse kind of sells it short. For the most part they’re serving the strips and the rib-eyes and the tenderloin, but there’s a whole lot more tasty parts to the animal than those.”

Zimmerman, who has spent years working with high-end, Japanese beef at restaurants such as Alexander’s Steakhouse, teamed up with co-owner Benjamin Jorgensen for the endeavor. Jorgensen has a tech background, but was looking to challenge the food concepts that typically come out of the Bay Area—meal-replacement drinks, artificial meats—for something much more primal and artistic.

“The real challenge was how do we take a very innovative city and become something even more innovative?” Jorgensen said. He believes they’ve succeeded, beginning with the space, which he says immediately disarms diners. “It’s an atmosphere that people haven’t seen before. It’s exciting, like your kitchen with a bunch of people working around in it. And it creates that warmth that gets people to open up in a different way.”

When you walk in, Gozu looks like the inside of an office building. There is no host stand; there is a metal slab. You can either walk left, which goes directly into the kitchen or main dining area, or you can take a right, which leads into a whiskey lounge. At the center of the restaurant is a wood and binchotan charcoal-burning grill. Diners walk into a show. Jorgensen says it all plays on the aspect of eating in Japan and gets diners excited for their culinary journey.

“Many restaurants [in Japan] are kind of buried in high rises and on different floors or even in residential buildings that are mixed with office buildings. You don’t have that traditional storefront,” he said. “When you go to a good restaurant in Japan, you’re often on a journey. There are no English signs. It’s normally buried around a corner. It becomes a challenge that when you get there, you’re pleasantly surprised and rewarded. And that journey mirrors the culinary side of things too.”

On the culinary side, Zimmerman begins the journey by traveling to Japan, personally, and selecting an entire wagyu cow for the restaurant. The farm he’s working with now is about an hour outside of Sapporo. While he had visited Japanese farms in the past to select and import cuts, it wasn’t until launching Gozu that he invested in the whole cow.

Financially it turned out to be a better deal. Zimmerman says it’s half as expensive per pound. Prior to Gozu, he was selling three-ounce pieces of meat for $165. Now he sells 10 courses for $150.That’s the namesake, small-bites tasting menu, which is like a complete head-to-tail experience. The restaurant doesn’t waste anything: Scraps are fermented into house-made shoyu, or soy sauce, and even the bones are burned as charcoal in the grill.

There are 14 items served over 10 courses and every piece of the animal is highlighted, from the shoulder to the fat to the connective tissue. The chef employs kappo, a Japanese style of cooking that incorporates grilling, steaming, frying simmering and raw. Some pieces are dry-aged, some are prepared sashimi-style, some are turned into bacon and served with char-grilled blowfish tail. It’s a lesson on texture and flavor and how the beef shows nuance. (Diners can also walk in and order dishes like skewers a la carte.)

“Anytime you bring an entire animal in, it changes your entire cooking dynamic,” he said. “Because you don’t just find the chewy part and throw it out. You find a part with a little bit more texture and you find out how to accentuate it and make it something special. I’m still a little surprised every time I taste Japanese beef. It’s just amazing. I’m still continually learning.”

The Gozu duo also runs a beef distributing company, A-Five Meat Company, which they use to import wagyu and sell prized cuts like strips, rib-eyes and tenderloins off to other restaurants. Zimmerman says it helps “subsidize” their restaurant business somewhat.

“We’re taking the time to lean in and understand every aspect of where the product comes from,” Jorgensen said. “Not just the story some salesperson tells us, but us actually touching every piece of that story.”

While Gozu is currently only using beef from Japan—they have 780 pounds from one cow to get through—they plan on incorporating Australia-raised and U.S.-raised cows in the future. They are primarily trying to highlight the breed, which does not necessarily mean it must always be raised in Japan, although Zimmerman prefers that one for now.

“At the end of the day, Japan is the king when it comes to wagyu,” he said. “But right now we’re serving all exterior parts, exterior muscles of the cow. You can’t actually import any offal or heads or tails from Japan. As the menu grows and as we want to showcase more of we’re doing, that’s when we’ll bring in more from Australia and the U S.”

Jorgensen hopes to replicate similar concepts in cities across the U.S., including New York, L.A. and Chicago.