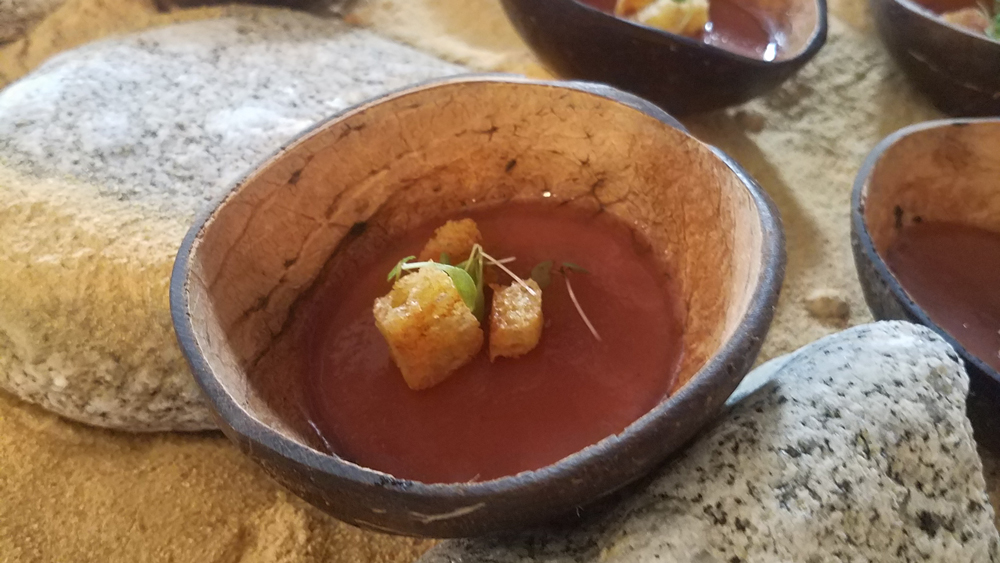 At a recent food festival, chef Mike Lofaro decided to take things in a different direction. Normal fare at these events could include caviar, maybe some foie gras, and perhaps a spot prawn or two. But he wanted to look beyond mere decadence and serve something delicious that could make a difference. His would include some of the old luxe trappings, but also highlight ingredients straight out of Hawaii’s “most wanted” list of invasive species.

“When you look on the leeward side of the islands, all you see are kiawe trees everywhere, and on the windward side, strawberry guava is that plant,” says Lofaro. “A lot of people view these [invasive species] as rubbish, so we wanted to turn trash into treasure.”

The resulting “Eat Your Invasives” dish paired the aforementioned foie gras with kiawe flour pate, topped with strawberry guava gel and “white bread poke” (a.k.a. croutons, an addition Lofaro dubbed “a little jab at Western colonization”).  He then incorporated sorel, nasturtium, and sumac—also considered invasive species in Hawaii—into the dish.

Since the event in April, Lofaro and his team have continued to steadily incorporate ingredients from invasive species at Maui’s Grand Wailea resort, where Lofaro serves as chef de cuisine for Humuhumunukunukuāpua’a restaurant (named after Hawaii’s beloved triggerfish, and affectionately known as “Humuhumu” for short).

It’s a novel culinary approach, but also a significant one in light of raising awareness for the pervasive role these species play in Hawaii. Due to its isolation as an island state, Hawaii is more susceptible and plays home to more invasive species than anywhere else in the country. Currently, no less than 100 invasive species are disrupting and crowding out native ecosystems—causing the state legislature to deem these plants and animals “the single greatest threat to Hawaii’s economy, natural environment, and to the health and lifestyle of Hawaii’s people.”

“We’re in Hawaii, but not in the Hawaii that was really Hawaii,” says Lofaro. “What we see now is not what it was 500 or even 250 years ago—the landscape has been completed ravaged by invasive species. But it’s still a beautiful place, and these things that we consider a nuisance are actually a sustainable, edible resource that we should be using.”

Lofaro, named Maui’s “Chef of the Year” in 2016, has always been a champion of finding innovative ways to live off the land. The concept of his Emmy-winning “Search Hawaii” show—which also ran in 2016—featured him and Grand Wailea’s cultural ambassador, Kainoa Horcajo, traveling through Hawaii to unearth ingredients found in nature and create meals based on the Hawaiian lunar calendar and local culture.

One of the people they encountered on that journey, Vince Dodge, would ultimately serve as a key inspiration for Lofaro’s “Eat Your Invasives” concept. Dodge is the founder of Waianae Gold, an Oahu-based company known for its kiawe-based flour and energy bars. Dodge has been exploring the culinary possibilities of kiawe since 2006, when visiting tourists from Arizona told him that Hawaii’s abundance of kiawe could be a “health goldmine.” (Kiawe is proven to be gluten-free and diabetic-friendly, and has long been a dietary staple of Native Americans living in the Southwest.)

“They were astounded that we had acres and acres of kiawe— and when we told them we considered it rubbish, they were appalled,” says Dodge. “The more I learn about this tree, I’m amazed. That’s why we call it Waianae Gold.”

Since meeting Dodge, Lofaro and other chefs at the Grand Wailea have been using Waianae Gold flour to make everything from kiawe ice cream to dinner rolls to kiawe bean gnocchi at the resort. Kiawe is also used for grilling and smoking at the resort’s new beachside BBQ pop-up restaurant, Oko’a.

Lofaro and Horcajo still forage together for the other ingredients derived from invasive species, such as strawberry guava and monkeypod. Lofaro believes there is no shortage of culinary inspiration when it comes to offsetting Hawaii’s invasive species: “Nasturtium grows absolutely everywhere, and wild fennel grows like crazy upcountry,” he says. “There’s also lots of New Zealand spinach growing along the shore.”

Though it’s nearly impossible to vanquish—or even contain—most invasive species, Horcajo believes efforts like this can help reframe their potential. “We will never be able to eradicate invasives like strawberry guava and kiawe from the island,” he shares. “Since that is physically impossible, we have to find ways to incorporate them into our lives and make them into a resource, because they’re not going away.”

As the dates for the Hawaii Food & Wine festival in October near, Lofaro and his team plan to take the game up a notch with a “Naughty and Nice” brunch dish featuring French toast from Molokai’s famed Kanemitsu Bakery and housemade kiawe ice cream, and they’re continuing to develop new dishes from invasive species back at the resort. While Lofaro is quick to point out that he didn’t start the movement—he instead hails people like Dodge and wild foods expert Sunny Savage—he’s playing an important role in helping to further it.

“Turning this thing that a lot of people see as trash into a resource is a virtuous circle,” says Horcajo. “If in the process of making it a resource, we can put food on the table and highlight the plight of our native ecosystems, I call that a win.”