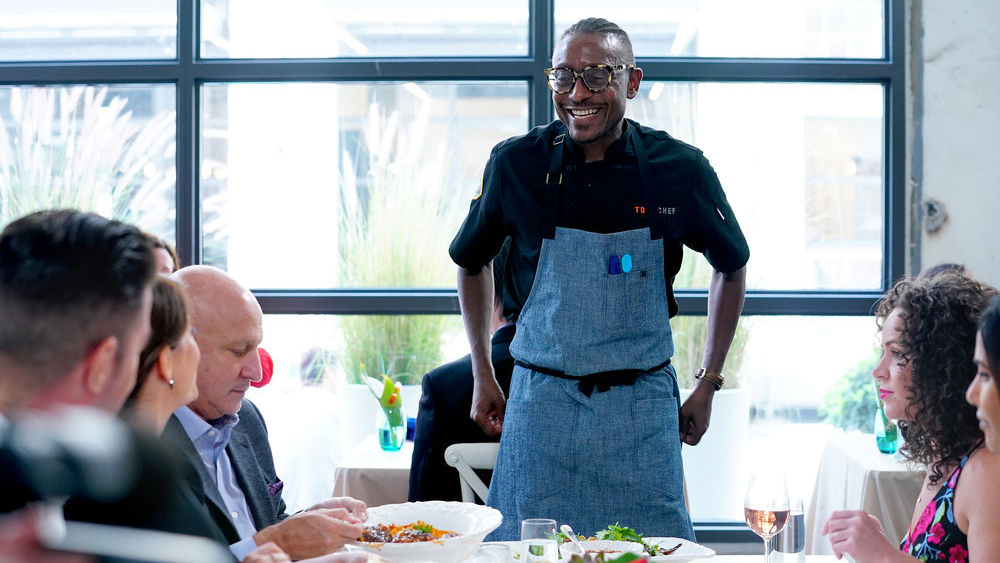 The expectations, honestly, could not have been lower. Last fall, I arrived at the Row development in Downtown Los Angeles with an invite to dine during the upcoming season of Top Chef’s “Restaurant Wars” challenge. As a longtime watcher of the show, it was an opportunity I couldn’t pass up, even if I was expecting a bit of a train wreck. How good could the food be on a reality TV show? I’d come and have fun watching the sausage be made, while eating subpar sausage in the process. I had no idea what the theme of the restaurant was or who the chefs that were cooking would be, yet when the food started coming out at the makeshift restaurant, I couldn’t believe how delicious it was.

I was eating at Kann, the concept created by Gregory Gourdet, a former Top Chef finalist and director of culinary operations for pan-Asian restaurant Departure in Portland, Ore. Gourdet is known for creating bold dishes that draw inspiration from Korea, Japan, Thailand, China and more, but Kann was different than what the public has grown accustomed to from him.

His previous stint on Top Chef had left him wanting to explore his Haitian heritage more, pushing him to dive deeper into the food he grew up eating yet never cooking professionally. Now he was back competing and winning by cooking this cuisine that’s largely underserved in America. But he has even bigger plans than winning a reality TV cooking challenge. Soon, “Restaurant Wars” diners won’t be the only people to eat Gourdet’s Haitian fare. He’s building his first solo spot around the food people saw him successfully cook on TV.

Gourdet is a first-generation America, born to Haitian parents in New York City. He lived there for a year as a kid and even summered in the country thereafter, but eventually he and Haiti drifted apart. After his season competing on Top Chef Boston rekindled an interest in his parents’ homeland, he hosted a Haitian pop-up dinner in 2015. To his chagrin, it didn’t quite work. From the ingredients he sourced to his own execution, he could tell he had to immerse himself further to bring the experience to life.

“On the show I realized I was a global chef—I’m inspired by global flavors,” Gourdet tells Robb Report. “I need to travel the world. I need to not just eat at restaurants but go work with the cooks there, work with my aunt’s cook, go into the hills and ask women how they make the food they sell.”

Griot and Fritay. Two of the most iconic and well known Haitian dishes. Twice cooked pork- many cultures have versions of this dish. Griot starts with a marinade of sour orange juice, scotch bonnet, garlic, shallots and heavy seasoning before getting simmered till tender, then fried til outside crisp. Fried plantains and lots of hot, crunchy pikliz to accompany. We drove to the mountain foothills of Kenscoff for this. @haitianchef has been getting this dish from this vendor for decades. . . . #haiti #griot #fritay #pikliz #kenscoff #roots #culture #heritage #haitianfood #lakay #ggisglobal ✊🏾🇭🇹✨

And so 22 years after he’d last set foot on the island, Gourdet returned to Haiti in 2018. He spent a week with family, hanging out in the kitchen as his aunt’s cook prepared three meals a day. His education extended outside the home, into the restaurants of Port-au-Prince and to the small farms and roadside vendors nestled in the mountains. On one excursion he found a woman who had been making griot—a Haitian spiced pork—in the same spot for 20 years.

From this visit and a subsequent trip to a food festival, a fuller picture of Haitian cuisine emerged for him. “It’s a lot of Caribbean and African ingredients—a lot of root vegetables, lots of seafood, plantains, yucca, yarrow root, rice, beans, spicy chilies, coconut milk and all these tropical fruits,” he says. Gourdet started making his versions of classic dishes like the griot; stewed chicken; rice with bean sauce; fried plantains; marinade called epis that’s made from black pepper, garlic, onions, parsley, thyme, habanero and cloves; and the ubiquitous spicy condiment pikliz. “It’s cabbage that’s cold-pickled with scotch bonnet chilies, onions and shallots,” Gourdet says. “It’s spicy and crunchy and you have it on everything.”

By the time Top Chef and “Restaurant Wars” rolled around again, he knew in the back of his mind he wanted to pursue a Haitian restaurant, now that he would have a national platform to discuss the cuisine. “I’d done the food numerous times—at pop-ups in Portland and the James Beard House—that I was ready for the show. I was so excited.”

He first wowed the judges by pitching the concept and preparing an oxtail dish and a whole red snapper. Then, for elimination challenge, he cooked many of the dishes described above, such as the chicken, griot, plantains and bowls of pikliz. Dining on the family-style menu that day, I was struck by how focused the concept and the food already was. Kann was a restaurant I’d want to tell my friends to dine at, too. Judge Tom Colicchio agreed: “It just feels like a restaurant, and in a lot of ‘Restaurant Wars,’ it doesn’t.”

Colicchio also honed in on something Gourdet wanted to accomplish. “He didn’t try to chef it up,” the judge said.

“Haitian cuisine is so underserved in America, outside of Miami or New York,” Gourdet says. “I really just want to make traditional Haitian food. I don’t want to fuss it up. I don’t want to modernize it.” That vision won the day on “Restaurant Wars,” and in the wake of the episode airing, he has heard from people in the Haitian community about how he approached the food. “Haitian social media is excited,” he says. “People are grateful I presented truly iconic dishes.”

Gourdet wants to harness that excitement into creating his own wood-fired Haitian restaurant in Portland. Covid-19 has thrown a wrench into the timing of the opening. Before the crisis hit, he was looking for a space in the city and aiming for a January 2021 opening. Now, the chef’s plans to travel to Haiti for more research have been delayed, and the restaurant, for which he’s still working on a name, will be pushed back later in 2021. Even with the industry in such flux today, he’s keeping focused on making sure this concept happens.

“I’m still learning a lot about Haitian food,” Gourdet says. “I cook so many different things, and I feel the most comfortable cooking Haitian food. It brings me the most joy.”