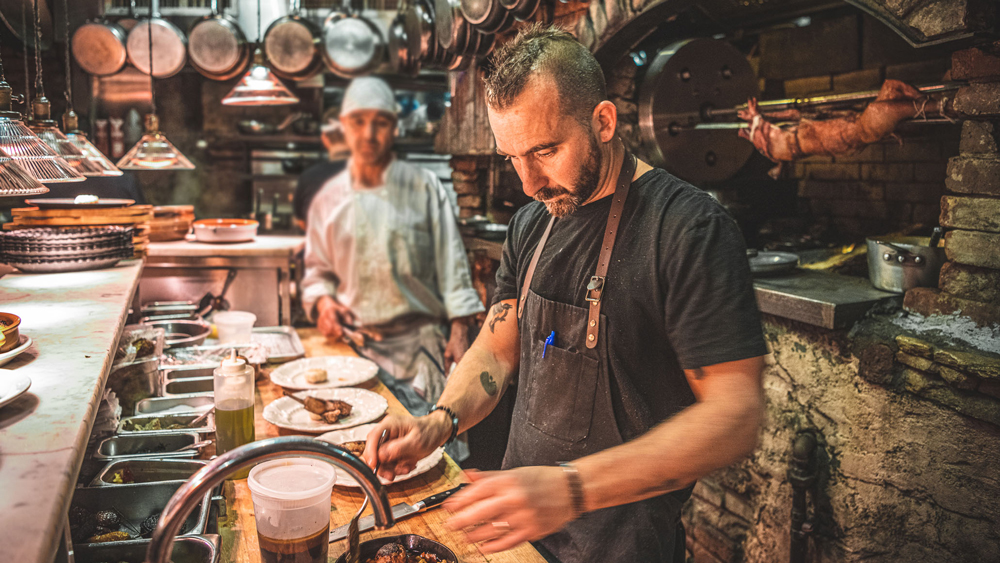 Marc Forgione has mastered the art of grilling steak—and is sharing a few pointers for getting it just right. The chef-owner of his eponymous Tribeca restaurant, which has received numerous accolades, began honing his culinary skills when he was just 16 years old. The youngest winner ever of Food Network’s The Next Iron Chef (he was 31 at the time), Forgione has become a successful restaurateur (also chef-owner of Peasant and co-owner-partner of Khe-Yo, both in New York City) and is the author of Marc Forgione: Recipes and Stories from the Acclaimed Chef and Restaurant.

The celebrity chef can often be found firing up the grill at home. “I do it a lot, actually. I love it,” Forgione says, adding that he was grilling more frequently than ever during the pandemic when restaurants were forced to temporarily shut down (All three of his aforementioned restaurants have reopened for indoor and outdoor dining). He also has been documenting his cooking adventures with his son, Sonny, on Instagram.

With summer grilling season in full swing, Robb Report chatted with Forgione about how he fires up the perfect steak—from picking out the best cut of meat to proper seasoning and even the right way to slice it. Here are his top tips and tricks for taking your grilling game to the next level.

How to Source Your Beef

“I happen to live a couple blocks from Dickson’s Farmstand Meats (an excellent neighborhood butcher shop in Chelsea Market), so I’ll go there whenever I can,” says Forgione. “They have fantastic beef, as well as pork and veal. At the restaurants, we use Pat LaFrieda and we also use Fossil Farms at Peasant for the special Piedmontese beef.”

Since restaurants and chefs develop relationships with meat purveyors and specialty farmers, they are able to get the highest-quality cuts available. If you don’t have a good trusted butcher nearby, there are several great steak purveyors that ship nationally. Because the quality of the meat is just as important as knowing how to properly cook it.

Which Steak Cut Should You Choose?

When grilling for himself or his family, he “loves hanger steak, skirt steak, or flat iron steak—all those kinds of ‘off cuts’ that are loaded with flavor and perfect for the grill,” he says. “But when you’re looking for a crowd pleaser, or cooking for a lot of people, I usually go for a ribeye—especially if I’m grilling in charcoal, because it has all of that beautiful fat cap, and the fat really absorbs the smoke much better than lean meat.”

Firing Up the Grill

Forgione’s preferred grill is Char‑Broil brand and features an adjustable grill basket—a durable grate that is key when you have a charcoal grill. “That is one of my most important pieces of advice,” he says. “Because if you don’t have an adjustable tray, it’s basically just one heat the whole time. For example, if you made your coals too hot, you’ll have to wait. So being able to go up and down with the tray while using charcoal is really a game changer.”

Forgione uses a traditional fire starter basket and coal, along with his tried-and-true method: five pieces of newspaper. “It may sound stupid, but it works. And it has to be newspaper—it can’t be construction paper or cardboard or anything else. So if I’m going to grill and I don’t already have the newspaper, I go out and buy it.”

After he gets the coals nice and hot, which takes—give or take—20 minutes, he spreads them out and puts some firewood over the coals for a nice, earthy flavor. “At Peasant, we use oak, so I’ll take some of that wood to use at home.”

“If you have the space to have a gas grill, as well, for the convenience, having both definitely has its advantages—gas is easier; you just turn it on and you’re good to go. But the flavor is just so much better cooking over coal and wood.”

Typically, when grilling steak at home, he creates a meat marinade. “It’s so simple, but so good. All you need is a blender and a couple ingredients.” Simply throw your steak in a sealed bag with the marinade overnight in your refrigerator, then take it out so it can come to room temperature approximately an hour before you’re going to cook it.

To make the marinade: blend olive oil, garlic, black peppercorns and parsley together. He also adds a second herb, which is interchangeable. “In the summertime, I use oregano. In the winter, I use rosemary. It can be those beautiful spring onions, but it’s always parsley and then fill in the blank with another fresh herb. Then purée everything together until it’s nice and chunky and green.”

There’s no salt in the mixture, because he lets it marinate overnight. “Depending on the cut, you don’t want to cure the meat with salt. With big, thicker cuts you can, but for the hanger steaks and smaller steaks, you’ll want to season with salt closer to when you grill them.”

If you have any leftover marinade, Forgione suggests adding a few more ingredients to make a salsa verde-type dressing to serve with the steaks. “Add some type of acid to it—like lemon juice or vinegar. And you can add chopped cornichons, capers, chili flakes, hard-cooked eggs if you’re feeling fancy… really whatever you want.”

“If you’re not going to do a marinade, just keep it simple with a great spice blend. Whether it’s stuff from my friend, Lior (referring to Lior Lev Sercarz—the chef, spice blender and owner of La Boîte), or make a big batch of your favorite spice blends at the beginning of the summer, so you always have it ready to go whenever you want to grill.”

Don’t Play With Your Meat!

It may sound simple, but refrain from touching the meat while it’s cooking. “So many people like to flip the steak several times and press it down. This is also where having an adjustable grate is super helpful. If it starts to flame up too much, you can just put the grate down. If you’re using a gas grill, obviously just turn down the heat. But do not touch it! You want to get that initial sear, then flip it once (depending on how thick the steak is) and then back over to the other side and then back over again—so you really only touch the steak three times.”

Also, don’t ever slice the steak while it’s on the grill to check if it’s cooked. “You see people at home do that all the time. Leave it alone, just relax and don’t mess with it. It’s the hardest thing to do—that’s why, I guess, my recommendation would be to crack a beer and just chill.”

Rest It The Right Way

A common mistake home grillers make is not properly resting their steak. Another helpful tip: “Use a resting rack (a rack that fits into a sheet pan). Because when you rest steak on a plate, you may not realize that the side of the meat that’s on the plate will continue to cook (from the grilling heat) more than the side that’s not, so it’ll end up uneven.” A resting rack allows air to flow evenly around the steak while it’s resting.

His resting rule of thumb: let it rest for the same amount of time as you grill it for. “If it takes you five minutes to cook a hanger steak, let it rest for five minutes.” And he doesn’t recommend using a meat thermometer because you’ll lose some juices when you probe the meat. Since you should learn how to cook a steak to your liking, trial and error is the best way to go.

“Always slice against the grain. I know people hear that all the time, but that’s incredibly important. And I love finishing my sliced steaks with Maldon or fleur de sel or some type of big, flaky salt—that makes all the difference in the world.”

Go-to summertime wine pairings include rosé (’tis the season), however, Forgione has been drinking a lot of Nebbiolo and Chianti lately. “Ever since I opened Peasant, I’ve been getting into Italian wines even more.”