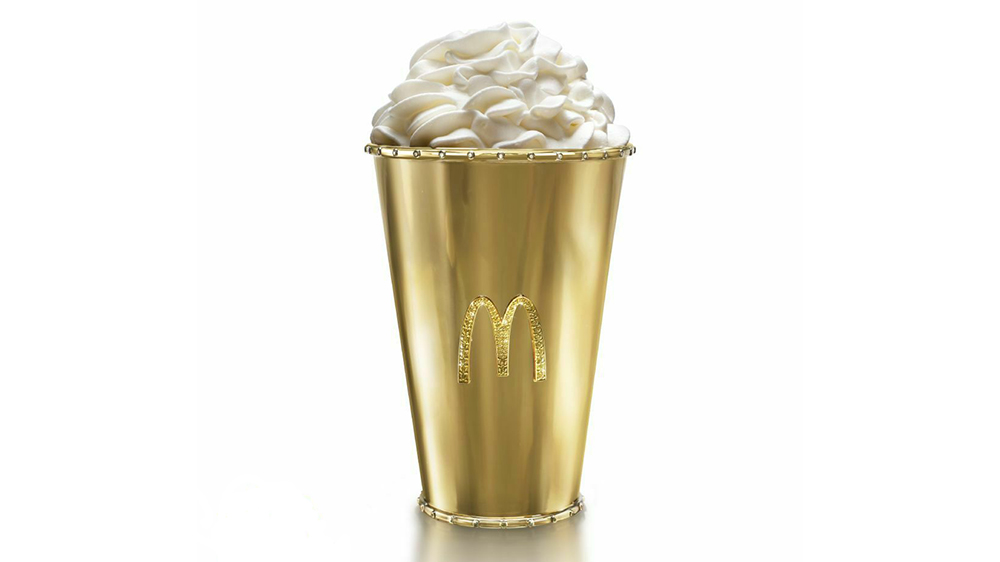 McDonald’s is one for tradition. And because of that the burger chain is celebrating the 50th anniversary of its Shamrock Shake—easily one of the most beloved novelty snacks of all time—by auctioning off a diamond and emerald-encrusted gold version of the treat that’s worth nearly $100,000.

The biggest name in fast food will mark the green-colored shake’s half-century by auctioning off a special lavish cup for it, according to a press release. Between and March 6, Shamrock Shake enthusiasts will have a chance to bid on the over-the-top jeweled item, with 100 percent of the proceeds set to go Ronald McDonald House Charities.

In honor of the shake, which was first introduced in 1970, McDonald’s commissioned a team of seasoned jewelers to create the hand-crafted cup. Made primarily of 18-karat gold, it has been decorated with 50 green emeralds and white diamonds meant to represent the treat’s trademark minty flavor, as well as 50 yellow diamonds standing for the number of years it has been a seasonal fixture on the restaurant’s menu in the lead up to St. Patrick’s Day.

“Tradition calls for a 50th anniversary to be celebrated with gold, so we wanted to create an item that not only represented this milestone, but our delicious Shamrock Shake,” said McDonald’s vice president of US Communications, Dave Tovar. “We invite all our fans to join us in this celebration as we cheers to 50 delicious years with the Golden Shamrock Shake and help raise funds for RMHC and its incredible cause.”

Those interested in the Golden Shamrock Shake have from now until 5 am ET on March 6 to bid for it on its eBay for Charity page. While the collectible is valued at $90,000, it’s possible it might go for even more. As of press time, bidding had reached $25,200. Fans will also have a chance to win a golden shake of their very own by purchasing a Shamrock Shake or an Oreo Shamrock McFlurry via Mobile Order & Pay in the McDonald’s app through March 6.