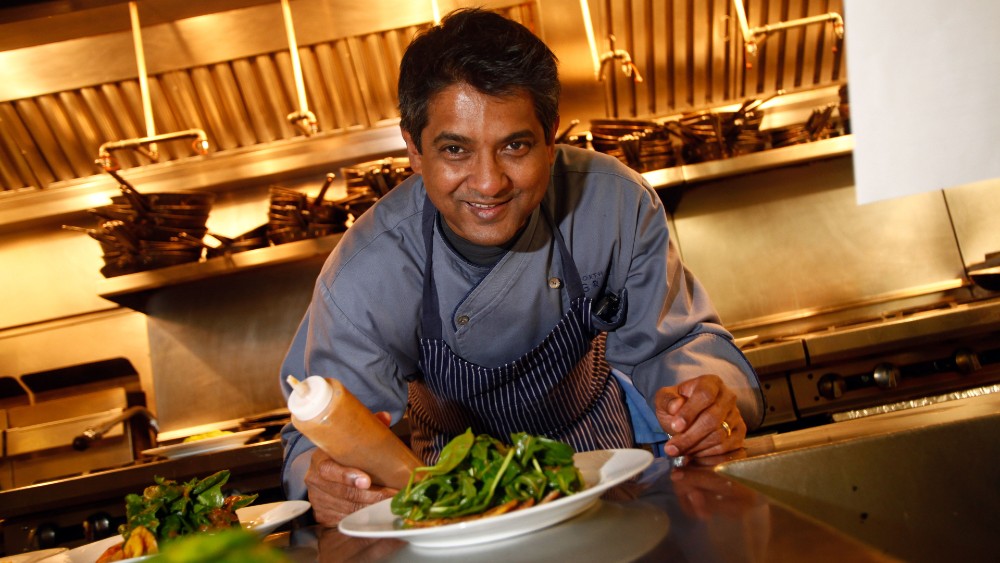 In the 1990s and 2000s, Floyd Cardoz showed New York City—and America—a whole new side of Indian cuisine. With his acclaimed restaurant Tabla, he presented flavors and dishes he grew up with in a fine-dining context, and became popular at a time when the upper echelons of Manhattan dining were still dominated by European cooking.

Cardoz’s family confirmed to the Indian publication Sroll.in that the chef had tested positive for Covid-19 and passed away on Wednesday at age 59. A week ago, Cardoz posted a picture of himself in a hospital bed on Instagram. The caption explained that he’d returned from India via Frankfurt on March 8 with a fever and, as a precautionary measure, had checked himself into a New York hospital.

“Nobody who lived in NY in the early aughts could forget how delicious and packed Tabla always was,” Top Chef host Padma Lakshmi wrote on her Instagram. “This is a huge loss, not only for the professional food world, but for Indians everywhere.”

The Mumbai-born chef found he had both an aptitude and love for cooking at an early age, to the slight dismay of his father. “Cooking was just another menial job people did in India,” Cardoz told the New York Times in 2011. He trained in his home country before heading to Switzerland for further schooling in French technique.

Yet, when he arrived in New York getting a job was difficult, until he landed at Gray Kunz’s Lespinasse—a restaurant David Chang regularly cites on his podcast as one of the country’s best during its heyday in the 1990s. The restaurant was a veritable breeding ground of outstanding chefs including Andrew Carmellini, Rocco DiSpirito and Corey Lee. Cardoz excelled among the best, rising to the ranks of chef de cuisine.

In an industry that could be rough and tumble, Cardoz had a reputation for kindness. In fact, it helped lead him to the restaurant that made him a star. When other chefs at Lespinasse teased a young cook who couldn’t get a consommé right, Cardoz helped him. That bit of generosity stuck with the chef, who later worked for Danny Meyer and told him to reach out to Cardoz.

Cardoz and the legendary restaurateur at the helm of Union Square Hospitality teamed up to open Tabla in 1998, a groundbreaking take on Indian cuisine. There he combined what he worked on at Lespinasse with Indian spices and techniques. Then-New York Times critic Ruth Reichl raved in her review that, “When I tasted seared foie gras with a pear, black pepper and anise compote, I swooned.”

In 2011, he won the third season of Top Chef Masters cooking the humble Indian dish upma, making his with semolina and mushroom, impressing the judges enough to hand him the title. Since that win he opened North End Grill with Meyer, cooking over live fire, before leaving to make Indian food again both in America and back in Mumbai, where his restaurant Bombay Canteen just celebrated its fifth anniversary.

Across social media, chefs from Chang to Naomi Pomeroy to Sri Gopinathan and more expressed their sadness at the loss. On his Instagram, Danny Meyer posted his remembrance earlier today.

Few people have done more than Floyd Cardoz to impact an entire industry, the career trajectories of more cooks, or the palates of more restaurant goers. He was beyond talented as a cook. He was a super-taster, big-hearted, stubborn as the day is long, and the most loyal friend, husband, and dad you could imagine. My heart is just broken. His life and career was full of triumph and adversity. We opened and closed two restaurants together and in that time he never once lost his sense of love for those he’d worked with, mentored, and mattered to. He made monumental contributions to our industry and to my organization, and his passing leaves us with a gaping hole.😢💔