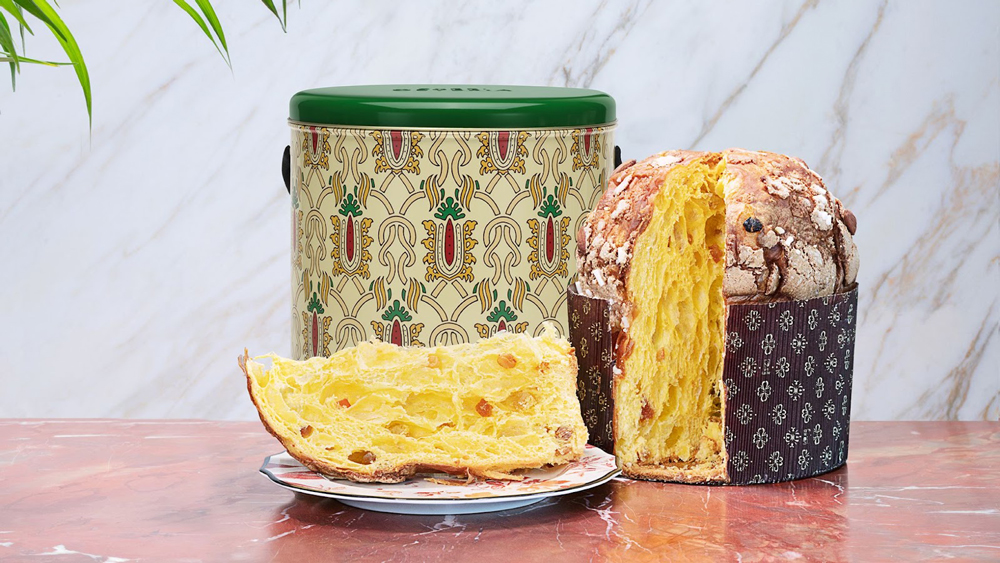 The panettone someone normally gives you around this time of year isn’t really panettone. I mean, it is, but when you’ve had the real deal of an airy, slightly tangy, slightly sweet tower of baked goodness, you understand the difference. That doesn’t mean the average store-bought panettone is not delicious, it usually just means you’re getting a big loaf of enriched bread or light cake in a festive box.

This holiday season, the Michelin-starred Gucci Osteria da Massimo Bottura in Beverly Hills has teamed with renowned baker Roy Shvartzapel to create the coveted kind of panettone—the kind you’ll hoard for yourself without shame once you get it. Gucci Osteria’s chef Mattia Agazzi worked with Shvartzapel on two limited-edition flavors retailing for $150: candied orange with raisin and orange with hazelnut gianduja.

What makes this particular panettone so special? Well, it really does come down to Shvartzapel. Panettone is a famously finicky dough that’s time, temperature and pH sensitive. This regional delicacy from Milan has circled the globe and become mass-produced, taking away its most enchanting qualities. But Shavartzapel has circled the globe too, working for the likes of Thomas Keller, Ferran Adria and Pierre Hermé—one of the world’s most revered pastry chefs. And most importantly, for Italian panettone master Iginio Massari.

Massari taught Shvartzapel how to tame the dough that begins with a natural starter made simply from water, flour and the wild yeast in the air. But that simplicity belies endlessly complexity, as the starter is a living thing. That starter is mixed with flour, eggs, butter and sugar, then begins a process of kneading, resting and proofing a few times over before baking and then hanging upside down while it cools to preserve its open structure. Shvartzapel says the process takes roughly 40 hours beginning to end to make a panettone.

He’s partnered with other chefs in the past, like when he did a chocolate edition with Alain Ducasse. These versions of his cake come inside a Gucci-designed tin and are available for pick-up in Beverly Hills, as well as online with nationwide shipping.