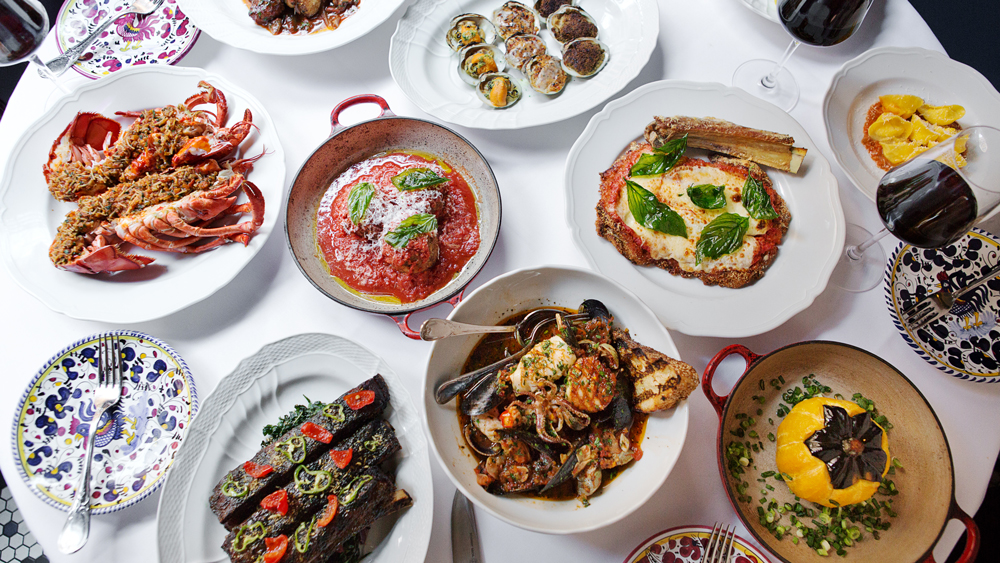 In a restaurant industry where so many constants have turned into variables, here is one thing you can always count on: If Carbone is open, it will sell a ridiculous amount of spicy rigatoni.

At Carbone Hamptons, a pop-up Southampton restaurant that started takeout in June and will launch outdoor dining this Thursday, the most popular dishes are the same as the bestsellers at Carbone’s New York City flagship.

Spicy rigatoni is always the chart-topper, and veal Parmesan and Caesar salad are always second and third. And with many VIPs sheltering-in-place indefinitely at their beach mansions, the size of many orders has been over-the-top.

“Orders are big in general, even by Carbone standards,” Zalaznick said. “A crazy one was 50 orders of spicy rigatoni and one veal Parm.”

Carbone Hamptons has specials like Sunday prime rib from sister New York City restaurant The Grill. Rotating dishes include different lasagnas and lobster fra diavolo. This is the Hamptons, where moguls are used to getting exactly what they want, so chefs Mario Carbone and Rich Torrisi are opening up their entire playbook during the Covid-19 pandemic.

“We will pretty much make anything special if you give us enough notice,” Zalaznick said. “We have a lot of regulars who let us know in advance, and we make them large-format dishes from any of our restaurants that they can pick up.”

In addition, Carbone Hamptons is selling grill-at-home kits with seafood, steaks or pork, which feed four people for around $200.

Legendary New York chef Daniel Boulud is also operating with a give-customers-whatever-they want attitude. Daniel Boulud Kitchen, the takeout and delivery service he’s launched during the pandemic, is offering Hamptons delivery for $595 simmer-at-home bouillabaisse kits and $1,000 grill kits. But Boulud is also happy to send boxes of food that will have you sorted for your entire weekend if you want, say, a vegetarian dinner, special desserts, and a viennoiserie-packed brunch along with your bouillabaisse.

“In the Hamptons, people want to have a relaxed weekend,” Boulud said. “We take care of everything.”

Boulud knows that $595 is a considerable expense for a meal. But beyond being labor-intensive and full of premium ingredients, the bouillabaisse is designed for four to six people.

“I don’t think we are the cheapest option, but we want to be the best option,” Boulud said. “It’s very much a different experience eating at home, and I think what’s important is the trust in the quality of the ingredients we buy and the quality of the dish and the flavors. There’s also the trust in the fact that we’re doing this with a lot of pride and a lot of care and a lot of generosity. There’s always leftovers.”

It’s a pandemic-specific formula: New York’s highest-end restaurants must charge a lot for their food to survive, but they also need to offer more value when people are eating at home. And these restaurants are self-aware when they say they’re providing a good deal even when prices might seem exorbitant to people who don’t have a mini-golf setup on their Water Mill estate.

“As far as our delivery program and value goes, I don’t know if there’s better value out there,” said Sushi Noz owner Josh Foulquier. “It sounds insane to say that for a $500 delivery box.”

Consider Sushi Noz’s $525 summer temaki kits, which are delivered to the Hamptons on Saturdays. Sushi Noz says the boxes will feed three to five people because the restaurant doesn’t want anybody to grumble about not getting enough food. But the kits are designed for about 25 to 40 hand rolls, depending on how big you want to stuff them, which means you could potentially feed a few more people or get multiple meals with one box. You could, for example, load up on chu-toro, lean tuna, yellowtail and this week’s salmon/trout variant and save the entire tray of uni for later.

In addition to the fish and uni that are always in the kit, there’s rotating shellfish that might include lobster, peekytoe crab, soft-shell crab or scallops. Everything is prepped by chef Nozomu Abe (who’s known as Noz) and his team at Sushi Noz on the Upper East Side and then packed in the Hamptons. A postcard-sized breakdown of all the seafood, accoutrements, and sauces (including anchovy sauce) makes it fun and easy to choose-your-own-hand-roll-adventure.

“The emphasis is really on the DIY part,” Foulquier said.

Like other New York restaurateurs, Foulquier started Hamptons delivery because he noticed that takeout numbers in the city were going down after customers headed to the East End. Sushi Noz has also seen a huge uptick in its catering business for the Hamptons and all of Long Island during the summer, with three to four events each week.

“Catering is something we always offered, actually since before the restaurant opened,” Foulquier said. “Part of what financed Sushi Noz is Noz and I putting on catering events.”

The events now involve going “above and beyond with the distancing measures” and alternating chefs so no employee is exposed to too many customers, but Foulquier wants customers to know that Sushi Noz will come to their house and create an omakase counter for up to 10 people.

“It’s been a smash hit, and it’s been one of the things that’s keeping us alive right now,” said Foulquier who adds that running a restaurant now is like “rebuilding a house after a hurricane.”

One difference, though, is that restaurants are dealing with an ongoing disaster. Boulud is about to start Westchester deliveries because customers have requested it. Zalaznick thinks there’s a chance that Carbone Hamptons might run through the year. Foulquier is also keeping his options open.

“I would have told you ‘no way’ two months ago or even a month ago if you asked me if we’d still be delivering to the Hamptons after Labor Day,” said Foulquier, who’s considering the possibility of a ghost kitchen or another New York City restaurant space to handle future takeout and delivery orders. “Now I would be surprised if we weren’t. I talked to a lot of clients when I was doing the deliveries the first couple weeks. Forget Labor Day. There’s people who want to leave the city forever.”

And these customers still want to eat the same food they used to when they were dine-in regulars at the city’s buzziest restaurants.

“Most importantly,” Zalaznick said, “we have been able to make sure that none of our regulars go into rigatoni withdrawal.”