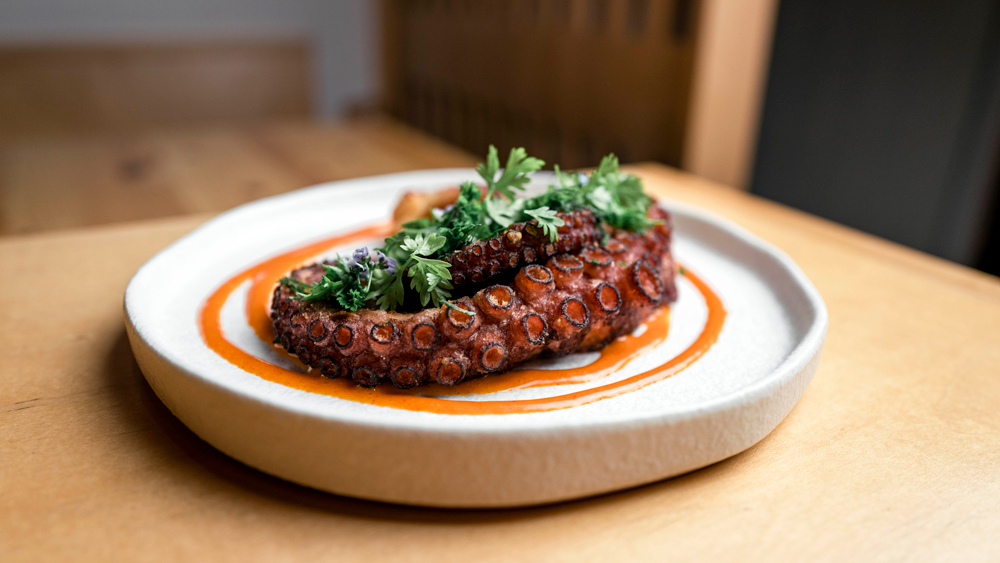 Hanchic and Holy Basil are modestly sized Los Angeles restaurants, but their collective impact makes them feel much larger. In May, during Asian American and Pacific Islander Heritage Month, both restaurants did pop-ups across the city while working on aggressive expansion plans. In the process, they made it clear that they represent the future of Asian-American food in LA.

Hanchic—where chef Justin Min serves craveable mashups like kimchi tagliatelle, bulgogi risotto and mandu with a doenjang-based riff on Bolognese—is a 1,200-square-foot space with seven tables in a strip mall on the edge of Koreatown. But that limited footprint hasn’t stopped Min and his partners at In Hospitality Group from using it as a test kitchen for multiple concepts. Chimmelier, In Hospitality’s fried chicken spot that started as a pop-up after Min created some sauces at Hanchic, just opened a brick-and-mortar location a couple blocks away.

The group’s portfolio also includes Kinn, where an alum of New York’s Michelin two-star Korean restaurants Jungsik and Atomix serves a $72 six-course tasting-menu. Chef Ki Kim’s summer prix-fixe features his versions of a Korean corn dog (with Dungeness crab), Pyongyang naengmyeon and elegantly plated chicken tteokgalbi that’s topped with herbs and edible flowers. And a perfectly cooked piece of octopus with gochujang (a $20 supplement to the tasting menu), that’s crispy but yielding without being mushy, has become a signature dish at the less-than-a-year-old Kinn.

And while Kim says he’s happy at his current price point and in his cozy space with a tasting counter and some small tables, Lee says he would love to find a bigger location that would be more optimal for Kim’s fine-dining ambitions.

At Holy Basil, which operates in a 700-square-foot location at the Santee Passage food hall downtown, chefs Deau Arpapornnopparat and Joy Yuon make uncompromising, gloriously herbaceous and habit-forming Bangkok street food with top-tier ingredients. There’s green curry with Jidori chicken and gra pow (a dish powered by the Thai herb known as holy basil) with Wagyu or crispy pork. Mushroom larb is a vegan dish that bursts with acid, spiciness and contrasting textures. Arpapornnopparat and Yuon also run The Base, which makes sweeteners and beverage starters and has popped up at the Smorgasburg food market. And Yuon is a beverage wizard who might have a tea bar, with a production team dedicated to her drinks, at the next location of Holy Basil.

Arpapornnopparat and Yuon are working toward opening that new restaurant in Atwater Village later this year. They’ll have outdoor seating and are thinking about adding a kids menu and a market with Asian produce, including some they grow themselves. After that, the biggest project on Holy Basil’s horizon might be a location near Koreatown, a 3,000-square-foot space that would include a Thai omakase bar along with curries, noodles and rice bowls.

“Joy and I talked about this recently,” Arpapornnopparat says of the omakase bar. “Why would we stay in this box? We can totally cook anything to make it Thai food. A tasting menu is always just pushing who we are as chefs. Just open your mind, whether you’re cooking a really old recipe or elevating a new one. I feel like there’s not many people doing Thai food like this, so why not us?”

Even in their small downtown digs, Arpapornnopparat and Yuon have served tasting-menu dinners, including a special pop-up feast for AAPI Heritage Month. That dinner, with heirloom rice flown in from Thailand, fried barramundi and fermented pork, was during the same month when Holy Basil cooked at both days of The Infatuation’s Eeeeeeatscon LA festival and popped up at the Mama night market.

Hanchic calls itself a “not so Korean restaurant.”  Jesse Hsu Photography

Hanchic also cooked at Eeeeeeatscon. And on the night Chimmelier served its terrific fried chicken and sauces at the Mama night market, Min made multiple dishes for an AAPI collaboration dinner alongside dessert sensation Domi at Chinatown tea house Steep. And somehow, In Hospitality took Chimmelier to Smorgasburg every Sunday and opened its brick-and-mortar locations of Chimmelier and Mil. And then Min, who was also part of a Sundae School panel discussion at Smorgasburg in May, and Hanchic participated in the June 5 Taste of the Nation event.

If you ask Hanchic and Holy Basil why they are saying yes to so many things, they will give you similar answers. They’re not in this to just have an of-the-moment restaurant. They each want to create a thriving Asian-American hospitality group. And there was no way they were going to turn down prominent events in a month that celebrates the AAPI community.

“First of all, our priority is to get our name out there,” Lee says. “And especially with AAPI month, there were a lot of good events that were trying to support businesses like us. We didn’t want to miss out on any opportunities. We just had to say yes to everything.”

“The main thing for us, because we’re still small, is we want to advertise ourselves,” Arpapornnopparat says. “Any possible good opportunity that comes up, we do it. It’s just to get consistent momentum. And with something like Mama, it’s cool and it’s also Asian, right? We have to be there for our brand.”

Another thing that fuels Hanchic and Holy Basil is their belief that there is so much room for, respectively, Korean and Thai food to grow.

“I was amazed at how Korean food went that far,” Lee says. “It motivated us to push forward. We want to approach Korean food in different ways, because there’s so many good traditional Korean restaurants in LA. We thought it would be best if we put our own style into it.”

Lee says the idea for In Hospitality originally grew out of a trip to New York City, when he ate at Cote, Jua, Take31 and Nowon and realized he wanted to help create a new-school Korean-food scene in Los Angeles. He knows that he and his partners are running as fast as they can and often just figuring things out while they sprint. But after opening Hanchic in September 2020 and surviving a pandemic that still isn’t completely over, Lee is energized by the possibilities that In Hospitality is seeing.

When I tell Lee that there’s still nothing like Jungsik and Atomix in Los Angeles, he nods and says, “That’s why we have to hurry.” Lee sees a chance to do something for his culture, so his goal is just to put himself and his partners in a position where they might be able to change the conversation about Korean food in LA.

Meanwhile, when I tell Min that it’s nice that small independent restaurants like Hanchic are still standing and now climbing, he laughs.

“More like getting ready to climb,” Min says. “It’s just the start, now that things are getting back to normal.”

When you operate small independent restaurants, it’s often about the day-to-day: staffing, cooking, pandemic-related challenges that still linger. But it’s also important to look at the future.

Chimmelier is something that In Hospitality hopes to grow into a quick-service chain. Beyond fried chicken, Chimmelier serves kimchi fried rice and street food like corn cheese and shrimp toast.

“It’s kind of like the Korean Jollibee,” Lee says.

And In Hospitality isn’t limiting itself to Korean food. Min, who previously cooked Vietnamese food at Little Sister, has been doing a pop-up lunch menu with pho and other Vietnamese dishes at Hanchic.

Holy Basil, for its part, is ready to pour everything into a Koreatown-adjacent restaurant that might open in late 2023. Arpapornnopparat and Yuon want that space to be a hub for experimentation, where quick casual meals and elaborate tasting menus with wine pairings co-exist, where they constantly try out new ideas and develop new concepts.

“The plan is to have a Thai restaurant group and some Thai merchandise, like in Thailand but grown in LA,” Arpapornnopparat says.

He and Yuon have been scouting multiple spaces all over Los Angeles. As always, they’re willing to quickly say yes if they see a good opportunity.