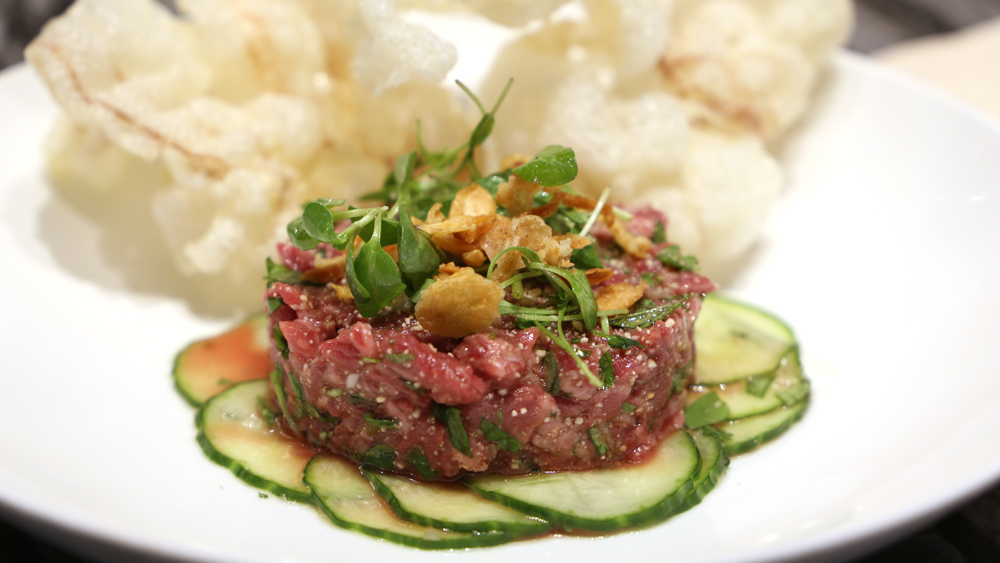 Las Vegas chef Gina Marinelli is getting ready to debut her version of an elegant steakhouse, so naturally she’s been thinking about premium beef and caviar service and the Las Vegas Raiders.

For Marinelli, it starts with meticulously sourcing meat. Harlo, a Downtown Summerlin steakhouse that plans to have its soft opening on October 25, will cook steaks like Western Reserve filets and Allen Brothers bone-in rib eyes on a wood-fired grill. Marinelli will serve 60-day wet-aged Icon XB wagyu, which ages when it travels from Australia by boat. She’s excited about having California Holstein steaks, including massive 28-day dry-aged bisteccas alla Fiorentina, from Flannery Beef. She’ll also serve Flannery’s beloved Jorge cut, which is a thick steak with a full rib from the chuck end of a prime rib.

Marinelli is a big fan of Flannery’s steaks and also of the narrative behind the meat. Flannery Beef is a family business run by a father-daughter team, Bryan and Katie Flannery, and their beautifully marbled beef is from dairy cattle.

“It’s not going to be a steak that goes all the way across the plate like people are kind of used to,” Marinelli says. “This is going to stand up super thick, and it has such a presence. But dry-aging is what Flannery is known for. There’s something magical about the mold that Katie has developed inside that dry-aging room. She’s actually trying to study the DNA sequence of the mold. I just love partnering with her. I love seeing another powerful woman coming forward and producing a cut of beef that people aren’t typically going to see out here in Vegas yet.”

Marinelli, who was the executive chef at Scott Conant’s D.O.C.G. at The Cosmopolitan of Las Vegas before she opened game-changing off-Strip Italian sensation La Strega in 2019, is driven by a desire to give Las Vegas new experiences. At Harlo, a 180-seat colossus that’s twice the size of La Strega, she will up the ante with caviar service that’s purposefully unlike anything else in Las Vegas.

“When we opened La Strega, we started to bring in caviar from Italy and it really kind of took off and it was fun,” she says. “I used to go to The Riddler in San Francisco and I loved the way they did caviar. It was, like, very bougie but playful.”

So at Harlo, Marinelli will serve Bulgarian caviar (which is harvested by the family of Bulgarian-born Vegas chef Nina Manchev, who runs Forte Tapas) with accompaniments like scallion pancakes, gnocco fritto and latkes.

“It’s going to be on a caviar cart, and everything’s going to get weighed, and it’s really going to be an over-the-top and fun way to enjoy caviar,” Marinelli says.

Harlo is the latest restaurant developed by The Lev Group, the off-Strip hospitality powerhouse behind La Strega and Al Solito Posto. And this steakhouse is opening at a shopping center in Summerlin because the team behind Harlo recognizes a prime opportunity in an affluent community known for its philanthropy and its mansions inhabited by casino bosses, pro athletes and other A-listers.

“Las Vegas is underserved off the Strip,” says Jeffrey Fine, CEO of The Lev Group. “All the focus for a long time was Strip restaurants while other cities were building out their local restaurant scene. We’re just seeing a huge underserved market for off-the-Strip restaurants.  There’s a need for the right concepts in the right places, doing the right things and doing the things that we’re going to do here.”

One factor that should add buzz to Harlo is Marinelli’s direct tie to the Las Vegas Raiders. Her father, Rod, is the defensive line coach for the NFL franchise. She’s cooked for events at the team’s headquarters and also made dinner for some of the players at La Strega.

“Obviously, my father is going to go wherever I am,” Marinelli says. “If I open a hot dog stand, he’s going to be my number one client. I know he’ll be supportive. But what’s also nice is that we have a place for these players to come and really feel comfortable. We’re just here to cook for them. They feel really at ease. It’s good that they know they can go to the steakhouse, have a quiet booth in the corner and get treated great. It’ll feel like family because that’s what this is. Hopefully when we’re celebrating wins, they can come out here and have a great piece of meat.”

What Marinelli promises is an experience that rivals top-tier Strip restaurants, with everything from the martinis to the desserts living up to the standards of high-end casinos. Harlo, she stresses, is a restaurant staffed with kitchen veterans and front-of-the-house aces from the Strip.

“The food is going to be the same quality, same integrity as the Strip,” she says. “But I’m going to highlight the service and the way it’s going to feel in here. The level of service is going to be superior than what’s on the Strip. We have people that have been at Costa di Mare, Giada and the NoMad, and we’re kind of like a motley crew that has come together to produce one of the best restaurants in the city.”

Marinelli is sourcing meat from the outstanding Flannery Beef in California.  courtesy Flannery

Marinelli can do caviar service the way she wants because Harlo has a talented pastry chef, Alberto Rodriguez, that she previously worked with at The Cosmopolitan. Rodriguez is creating breads, lavash, seasonal souffles, chocolate cake and a dessert that Harlo is calling “pumpkin patch” while he also fine-tunes what will be on the caviar cart.

“Don’t worry,” Marinelli says. “He hates me right now, but it’s going to be incredible. We just sprinkle a lot of global infusions and a little bit of Italian on some things.”

And while Harlo isn’t intended to be an Italian steakhouse, fans of Marinelli’s cooking at La Strega will be happy to know that they can order steaks with a side of baked pasta. For example, Marinelli’s planning to serve baked rigatoni with a spicy puttanesca sauce and also will make vegetarian truffle-ricotta raviolini with celery-root butter and maitake mushrooms.

Another way Harlo wants to distinguish itself from other steakhouses is with its riffs on seafood towers. In addition to crudo and chilled shellfish, there will be hot seafood towers with smoked chili butter and grilled bread. Imagine lobster, king crab, mussels, clams, bay scallops, slices of fish and an elaborate presentation involving candles and a paella pan.