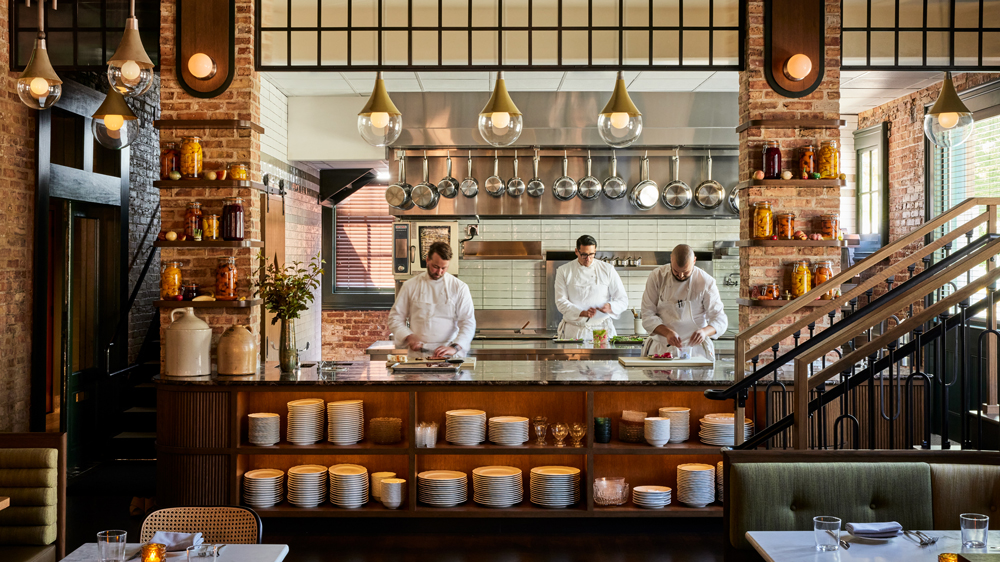 Midwest natives Joe Papach and Shaina Robbins Papach—both alums of Michelin-starred restaurants across the country—are bringing a fresh dining approach to Madison, Wisconsin, with a celebratory nod to the past. This week they opened Harvey House, transforming a portion of an old train station into an ambitious, modern supper club.

The husband-wife duo, with restaurants including The French Laundry, Quince and Chez Panisse on their combined resumes, met while cooking at New York’s Gramercy Tavern. After years in acclaimed kitchens on the coasts, it was time for the couple to make their way home, landing in Madison, where Shaina grew up the daughter of a classically trained baker.

For Harvey House, they didn’t want to just be located in the Midwest, they wanted to find inspiration from the region, too. In particular, they found themselves filled with nostalgia for that old way of dining. The restaurant harkens back to the golden age of rail travel and the post-Prohibition boom of supper clubs that dotted the Great Lakes region. “Many times you sit down and you get a relish tray, you’ll get a soup or salad with your entree, you’ll truly live in the moment and order that extra Martini,” Shaina says. “We loved that and wanted to bring that same sense of comfort and pleasure here.”

With the location they secured, the Papachs couldn’t help but evoke the era. The Harvey House is a two-story stunner in the former baggage handler’s building of a train station, originally built in 1903. “We just fell in love with the space, so we signed the lease in June 2018, having never opened a restaurant before,” Shaina says. “We wanted something that felt historically significant to Madison and that there was room to grow in all sorts of ways. It ended up being a much more ambitious project than we had initially realized—restoring an old building and excavating a 2,000-square-foot prep kitchen when there was absolutely no infrastructure at all. Essentially, it was just a shell of a building.”

You’ve got to start with the pickle plate—and the extra Martini.  Photo: courtesy Nicole Franzen

To tackle this considerable undertaking, they teamed up with Brooklyn-based Home Studios on the restaurant design and consulted with Tim Harrison, who revamped the kitchen of The French Laundry. And they tapped local artisans to dial in the details, like Jessica Niello-White, whose artwork is built into the archways and depicts the Wisconsin landscapes of yesteryear.

The original building’s exposed brick walls, windows and beams and the station’s sliding wood doors have been preserved, but the rest has been completely redone into an elegant, multi-faceted establishment. An expansive open kitchen and a handsome bar anchor the warm and inviting first floor dining room. Upstairs is equally striking, with another full bar, ample seating and a semi-private dining alcove. And a former train platform has been enclosed in glass, featuring floor-to-ceiling windows and additional seating. The finishing touches are being put on the renovation of a retired train car from the 1960s, which will host private parties starting in October.

Named after both Shaina’s grandfather and the innovative restaurateur Fred Harvey, the restaurant is truly a family affair, with Shaina leading design and business development and Joe helming the kitchen.

The menu features refined renditions of familiar dishes infused with seasonal ingredients and regional flavors. Here, the relish tray built for two features a rotating selection of elevated starters like sturgeon smoked pastrami style or crudite with ranch mousse. Or there’s the pigs in a blanket– except this is a smoked kielbasa cozied up inside some pastry. The reimagined Chicken Cordon Bleu gets garnished with broccoli, charred lemon jus and wild rice. And Shaina details a knockout riff on a traditional Wisconsin Friday night fish fry: superior walleye prepared as a filet, layered with white fish mousse and a thin slice of crispy pumpernickel bread, served with spätzle, savoy cabbage and a horseradish sabayon—also highlighting the state’s strong German food influence.

The cocktail list leans on classics like The Vesper, Sidecar and famed bartender Jerry Thomas’ Manhattan recipe, while the wine list is a collection of old world and new, with selections up and down the west coast, from Au Bon Climat’s fresh Santa Barbara Chardonnay to the Syrah of Yakima Valley in Washington.

Though the opening took longer than initially projected, partly due to the pandemic slowing down momentum, Joe and Shaina choose to see the silver lining in it all. “It gave us additional time to give the building what it needed, and to really dial everything in to be as ready as we could be.” Naturally, there were countless stresses along the way, but their aim is to bring a hopeful energy to the dining experience once again. “We want to have people come and really get taken away and truly enjoy the people they’re with and remember what they loved so much about dining out pre-Covid. And we couldn’t be more excited.”