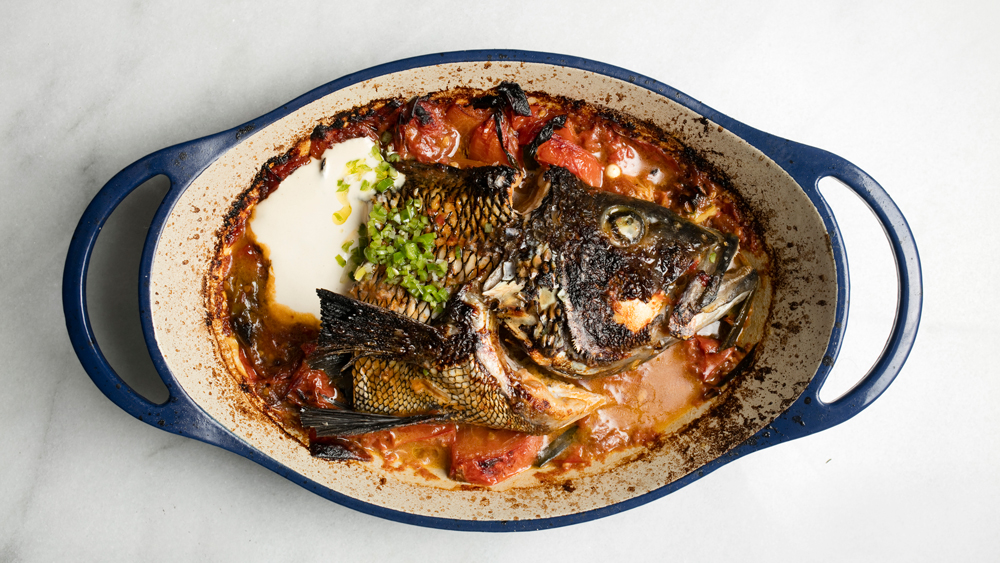 HaSalon, the Tel Aviv destination that’s known as the most extravagant and festive restaurant from pioneering Israeli chef Eyal Shani, is getting ready to make waves in America’s wildest dining city. A new outpost of HaSalon is scheduled to debut on November 17 at a Miami Beach location that was previously home to the storied China Grill.

The new restaurant is a partnership between Shani and Major Food Group, the hospitality company that’s shaken up the sizzling Miami dining scene with Carbone and ZZ’s Club. So yes, the chef who shocked New York by serving a $24 sliced tomato with olive oil and sea salt has teamed up with the restaurant group that sells $69 veal Parm. Shani will have a version of this tomato in Miami, and Major Food Group co-owner Jeff Zalaznick says that working with HaSalon feels like a marriage of equals.

“Eyal goes and spends hours and hours looking for tomatoes in Florida,” Zalaznick says. “I think of his restaurant as very similar to Carbone in the sense that it’s a big night out, but the food speaks for itself. At the end of the day, it’s a luxury product.”

“I believe in sharing all of the food,” Shani says. “Food deals with rituals of closeness, trust and association.”

In Miami, Shani has an open kitchen and chef’s counter where guests will be able to watch the preparation of crudos, salads, fresh pastas, pizzas and house-baked focaccia with assorted dips. Grass-fed steaks, free-range lamb and top-tier seafood will be cooked on a wood-fired hearth and grill while pita is baked in deck ovens.

And while HaSalon has a reputation as a restaurant where late-night dancing is fueled by wine and Israeli club beats, a lot of the most dramatic moments happen in the kitchen. Shani uses a big “horrible” hammer to smash herbs and flowers atop thin slices of beef carpaccio. He makes shrimp bagels and blue crab shawarma. He roasts giant prawns atop charcoal. Lamb turns into carpaccio, porchetta, pasta sauce, stew and more. Whole fish is “hidden in a burning mountain” of sea salt. Shani wants to make simple vegetables sexy, so he chargrills leeks, arranges spinach stems in a paper envelope and serves a whole cabbage head “melting in its own juice.” One pasta dish is known as “beating artichoke heart pasta.”

Shani clearly likes to play around with food and language at the same time, and he describes his love for Miami on what might be best described as a metaphysical level.

“For me, Miami is not made out of cement and iron,” he says. “It was created out of dreams of freedom from many sides. Miami is almost not the States; she lives on the breaking point between many places and situations that have a vibration that does not give them rest and makes them infinite.”

In fact, dreams, freedom and the idea of something that’s infinite are the “main ingredients” that Shani says he will start with at HaSalon in Miami.

Shani has more than 20 restaurants around the world, and he’s influenced countless others. At Tel Aviv’s Miznon, for example, he came up with the idea of roasting a whole cauliflower, and that dish has since been copied or riffed on by numerous chefs. Zalaznick became enamored with Shani’s food during his trips to Tel Aviv, where Major Food Group has two restaurants. What Zalaznick quickly realized is that most of his Tel Aviv nights were built around visits to HaSalon and other Shani restaurants. In-the-know friends would send him lists of must-visit restaurants, and almost all of them were Shani’s. And HaSalon was the one Zalaznick couldn’t get out of his head.

“It’s the most fun and most high-end restaurant by the greatest chef that’s the equivalent of Major Food Group in Tel Aviv,” Zalaznick says. “We want to incorporate other great brands into what we do and introduce them to Miami. HaSalon almost feels like Carbone Israel. It has the same soul and philosophy of sharing, the best ingredients, simple preparations, large portions. You share and have fun.”

“I think people have started to become less frenetic,” Zalaznick says. “People don’t want to move around from place to place as much anymore. A perfect night out is going to a restaurant, having a big meal, hanging out there, drinking, partying with your friends and not having to leave until you go home. As the night progresses, the volume goes up. It truly is a dinner party.”

Shani, for his part, says he expects HaSalon’s crowd to be “soulful people and beautiful people that turn the world upside down.”

And how does he create a menu in a new city full of such vibrant people?

“I just came, felt, experienced, smelled,” he says. “And suddenly all my knowledge came from that, from the energy of the place, from feeling the wishes of the locals, wishes that they never knew that they had.”